Grayson Perry CBE RA (born 1960 in Chelmsford, lives and works in London) is best known for his elaborate, laboriously handmade ceramic pots, often richly embellished with satirical social comment. His wide ranging practice also encompasses large scale prints, tapestries and multimedia sculpture that explore a wide range of historical and contemporary themes, from sexuality and religion to his childhood teddy bear. He is also a BAFTA-winning writer and presenter of television documentaries on themes of class, masculinity and cultural identity. When Perry won the Turner Prize in 2003, he accepted the award dressed as his transvestite alter ego Claire, a role he also assumed when in 2014 he delivered the BBC’s annual Reith Lectures. In 2015 he was made Chancellor of the University of London and received a RIBA Honorary Fellowship in 2016.

Perry wrote the article ‘Fear and Loathing’ in the Clay Supplement of Artists Newsletter, July 1994, p30. The piece reviewed the ceramics exhibition ‘The Raw and the Cooked’ at the Barbican, which included his work. In the article he questioned why pottery is not taken as seriously as fine art, writing: “To artists, craft is just a means to an end and that end is expressing their ideas. Artists don’t define themselves by how they make things but by what they have to say… The skills of the highly trained potter are a safe haven in which it is easy to hide from difficult questions like, how is studio pottery viewed by the art world?” He went on to acknowledge his own place in the debate: “I long ago resigned myself to the fact that I was supplying fragile knick-knacks for the mantle shelves of the well-to-do. That is the nature of ceramics, but I try to subvert from within.” 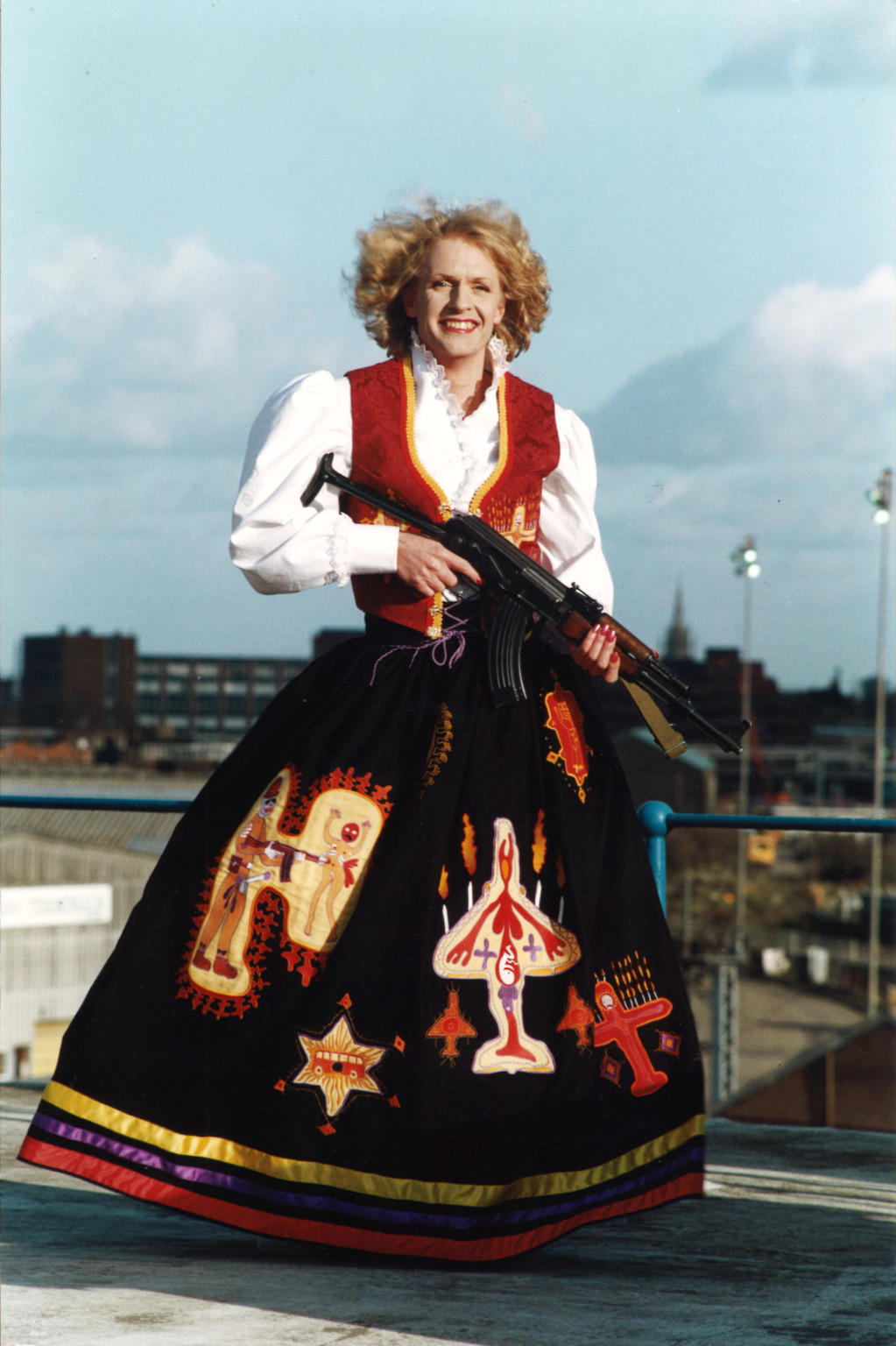 What did the 1990s mean to you both personally and professionally?
Personally it was having a young child around for most of the 1990s, and that puts quite a different perspective on anybody’s life. Then for most of the decade I was just struggling along and having quite bad up-and-down relationships with various art dealers and feeling quite bitter about it all. These were my pre-therapy years so I was angrier, bitterer, rawer and feeling a little hard done by.

At the same time it was the period when I probably went to the most art openings, and so maybe had more of a finger on the pulse. Now people ask me about young artists and I haven’t got a clue, but in the 1990s I had a fair old idea because London was booming and it was a fantastic time to be an artist there. But I was also a little bit older and little bit outside of the YBAs [Young British Artists], so that was quite tricky for me to deal with.

London was going bonkers and I remember being at White Cube in Hoxton Square and seeing the Notting Hill set in there with their handbags and I thought ‘this is weird – we’re seeing rich trendy people at art galleries. I don’t remember them being here before.’

It was also a period when I hit my prices. At the beginning of the 1990s my prices would’ve been about £300 for a vase and I was in my mid-thousands by the end, when Charles Saatchi came along.

How did your work develop in that time?
I got technically much better in that period. I learned a lot about ceramics and the nature of making them. I think the real boost was when I got therapy towards the end of the 1990s. I think that really changed my work. It made me much more aware of my processes and more in control of what I was looking at. 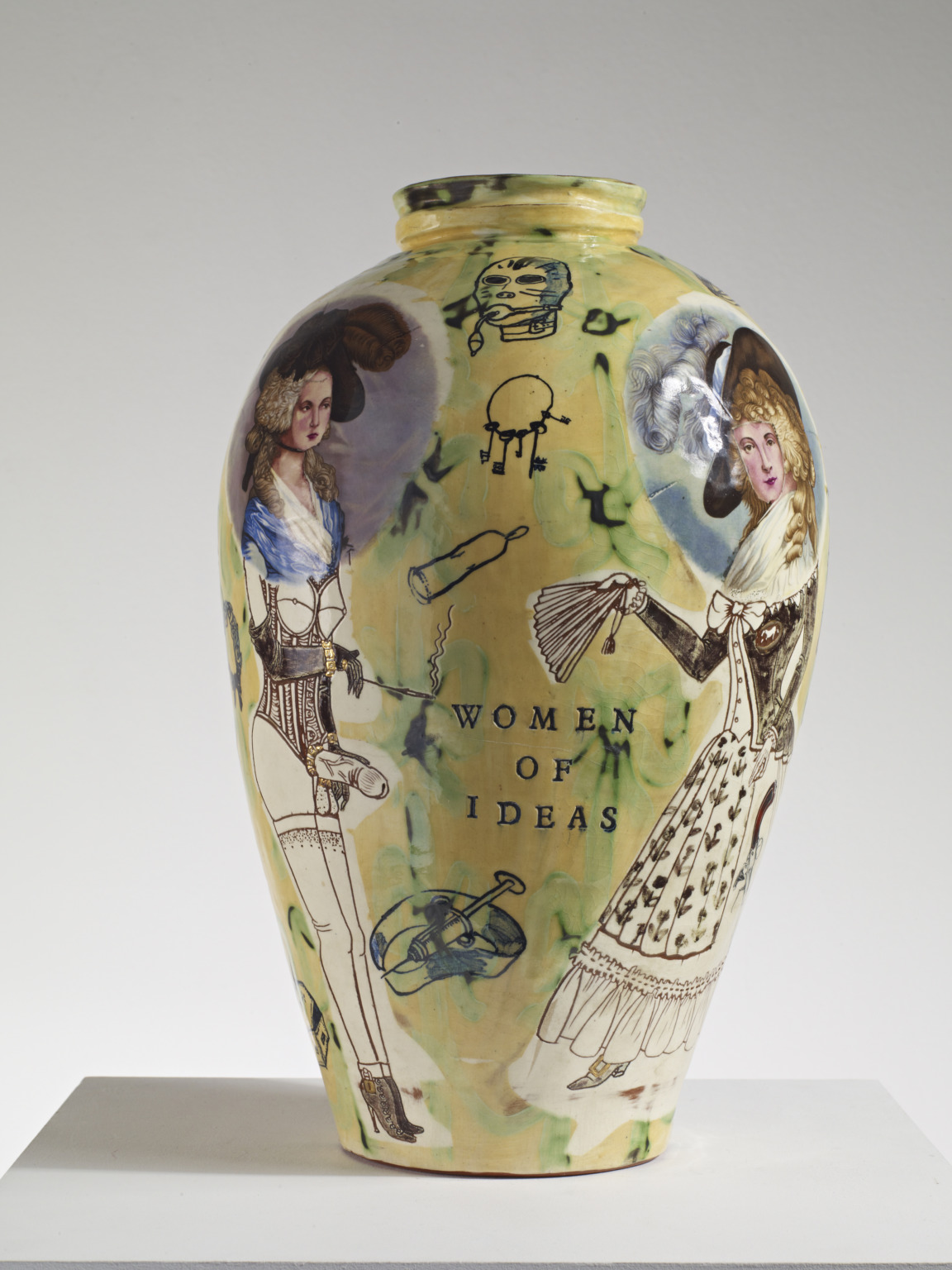 Were there any key moments or turning points?
I remember [the curator and gallerist] Clarissa Dalrymple coming round to my house and looking at my work and me thinking, ‘ah, that’s interesting.’ Then the next thing she said was, ‘can I bring a friend round?’ And she brought Sadie Coles, and I didn’t know who Sadie Coles was, and after they looked at my work she said, ‘Would you like an exhibition?’ and I said ‘where?’ And she said ‘Anthony D’Offay’, and I was like ‘WHAT?’ I was very innocent. I then had two shows at D’Offay in 1994 and 1996.

How did you become aware of a-n?
When you’re in a big shared studio block like I was for most of that decade, in Carpenters Road [in East London], it was part of the culture you were in. That kind of struggling artist community, all sitting around and having a cup of tea, just making work and supporting each other. Open studios, getting your toenails on to the bottom rung of the exhibiting ladder hopefully, things like that. I was definitely one of those artists that rose without trace, it was a very slow process, it wasn’t instant success. What’s quite unusual about my career is that I never had any problems selling, it was just that I wasn’t selling for much. I’d sell out a show and end up with a grand.

What role did a-n play in your development and career?
It was a useful resource particularly for putting you in contact with help if you were financially struggling in art. I remember there was always a page of exhibitions that were open submissions and things like that. I think that if you were an artist who needed those it was really good for that. I was already heading on a different course, though, and I always thought there was – and I think there still is to a certain extent – a divide between political, publicly funded art and privately funded, collector-focused art. And I never felt that I was going to get that commission for a public sculpture in Macclesfield. So a-n was probably slightly too earnest for my tastes. 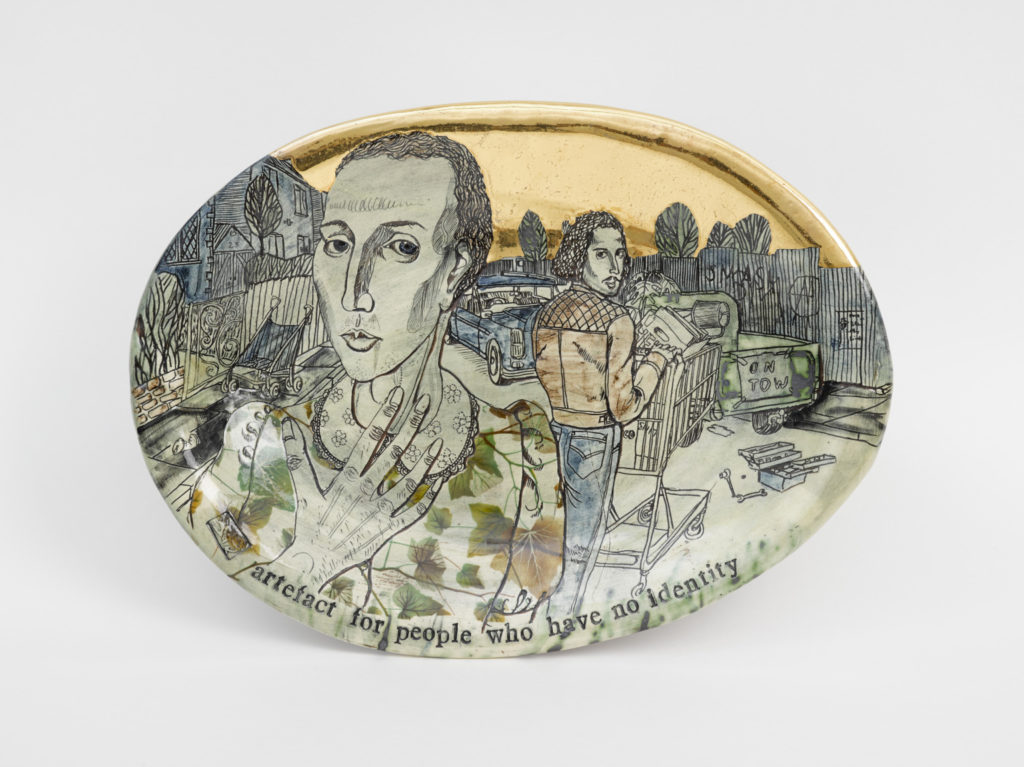 How significant was a-n in raising the issues of the time?
I was always aware of those arguments and gradually they’ve got louder and been taken more seriously over the decades, particularly over the last one. What’s been interesting for me is that the whole process makes you reassess the kind of lens through which you look at work. So our idea of the work we like and the work we think is of good quality has a political and social lens that we see it through, and those campaigns say that you need to take that lens away, or maybe adjust it, in order to look.

What we think of as good art is often because it’s familiar, and our eyes are trained to like that sort of thing. And so the aesthetic of a different culture or a different socio-political group, isn’t for you. I think it’s really important that those kind of arguments get made, and that there’s an openness to all different cultures. But as a white, now very middle-class, middle-aged, aging man, one of the things I feel uncomfortable about is that whenever there’s a kind of rebalancing, the art that I love is often either marginalised or can almost be seen as bad because of its political associations. A lot of British 20th century art is a middle-class drawing room version of what was going on in the art world. I think it was [the art critic] David Sylvester who said British art was like tightrope walking six inches above the ground.

Among the coverage of you in the a-n archive is an article from 1994 which you wrote for its Clay Supplement called ‘Fear and Loathing.’ This reviews ‘The Raw and The Cooked: New Work in Clay in Britain’ at the Barbican and discusses the distinctions between studio potters and ceramists in art, and how they work.
I read it again fairly recently and I was quite horrified how wicked I was! It’s tricky. I kind of backed into pottery, it was something that I was always wary of. That’s why I’ve never sat at a potter’s wheel, ever. I’ve never done it. It’s almost talismanically significant for me. I always say to young students, it’s really important how you identify yourself: if you say you’re a potter who wants to be an artist, that’s tricky. But if you say you’re an artist who quite likes dabbling in pottery, then that’s a different thing.

That basic identity issue is really important because it frames everything you do. You make something out of bronze and it becomes art, you make something out of clay and for a lot of people, until recently, it’s like sidestepping out of the art gallery. So you can’t ignore the popular framing of what ceramics are, because it’s still there, it’ll take a long time – if ever – to change. It is a domestic, decorative, perhaps functional, historic thing. It’s not 3D printing, is it? I think studio ceramics is quite a difficult cul-de-sac. It’s like trying to sail an ocean-going yacht in a lagoon, it’s not going to work. You’ve got to go out on the ocean. 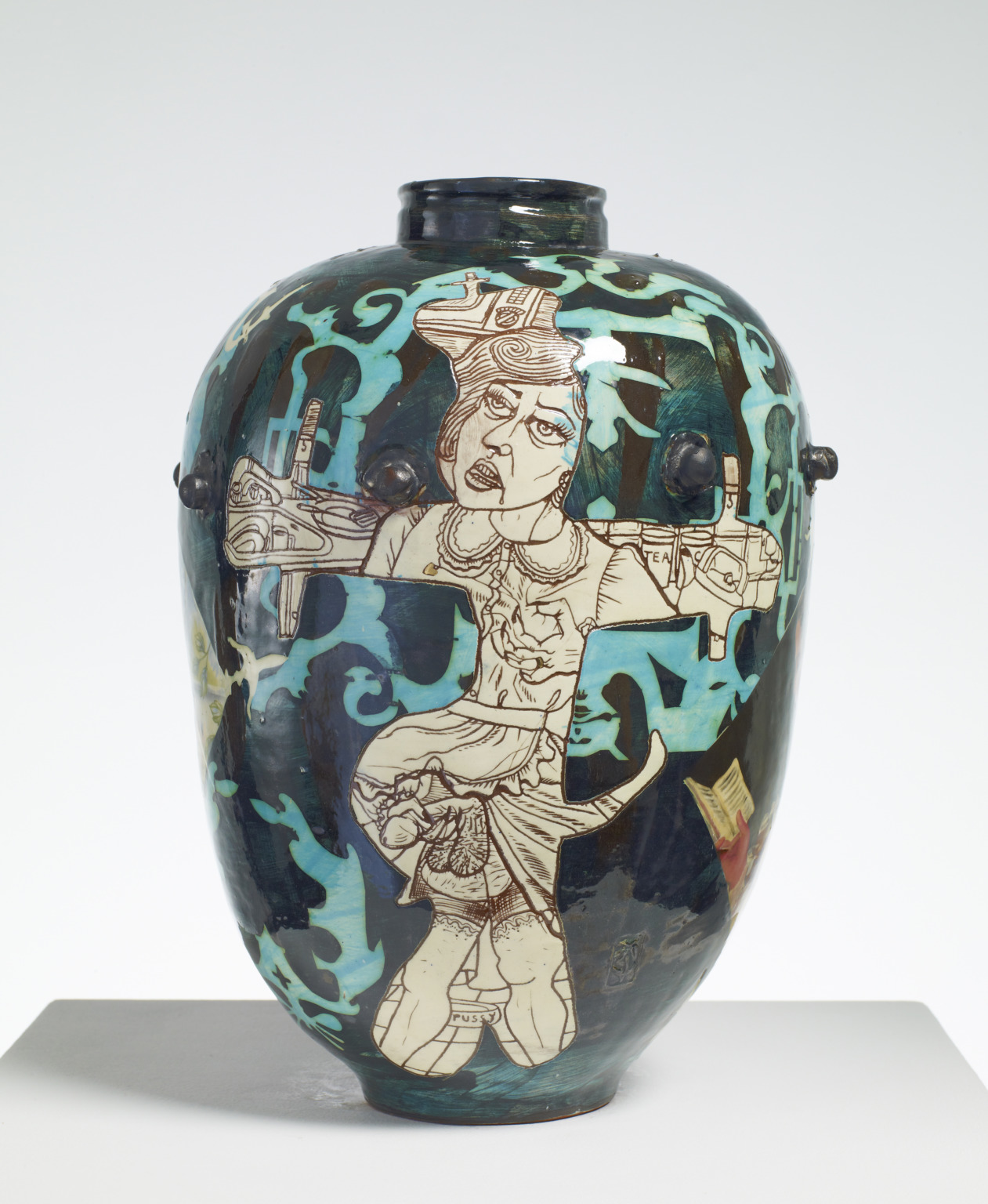 30 years on, what are the key changes for artists starting out now?
The art world has become this huge international asset market on the one side, and then on the other side it’s become a more heavily politicised activist area. And they’re the same two strands that I used to identify as a student: I used to call them the ACMEs and the Trendies.

I can make art that’s about tax avoidance, which I did in my last show, but then also make something that those very tax avoiders will buy, which is the dance I was doing. The pandemic has just brought into high focus and high contrast everything that was there already. For young artists setting out now, hopefully there’ll be a market for art afterwards, but it will be of a different character.

What advice would you give your younger self?
I think, the worst thing you can ever say to someone is, ‘just be yourself’, because that’s a very difficult thing to do. That was where therapy kicked in for me, because it allowed me to have the confidence in my instincts and start to shake off imposter syndrome, though I still get it now. But my advice would be to go with your instincts and to learn to trust your instincts. One of the things you learn in therapy is to begin to understand your own feelings about something so you can start to act on them. 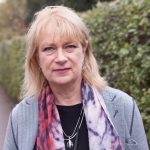