Richard Wilson RA (born 1953, lives in London) is a sculptor known for his often large scale interventions into architectural spaces. These draw heavily for their inspiration from the worlds of engineering and construction. In 1983 he co-founded the Bow Gamelan Ensemble with Anne Bean and Paul Burwell. Wilson was nominated for the Turner Prize in 1988 and 1989. His permanent public sculpture includes Slipstream, 2014, Heathrow Airport Terminal 2.

Wilson featured in the article ‘Art in Public’, Artists Newsletter, April 1987, p10, announcing the TSWA 3D project, described by its organisers as the ‘most ambitious public art event ever staged in Britain’, that would take place across 9 sites around the UK.

‘In Newcastle, Richard Wilson will be making a sound work in the interior of the Tyne Bridge and 600 silvered and shiny auto-parts will crash to the floor, described as a shimmering shower creating an industrial symphony.’

Wilson was also subject of a career profile ‘Art’s architect’, a-n Magazine, April 2002, p32. Written by curator and writer Simon Morrissey, the feature reflected on Wilson’s then more than twenty-five year career in the lead up to ‘Irons in the Fire’, a major touring exhibition that opened at Mappin Art Gallery, Sheffield that month.

What did the 1980s mean to you both personally and professionally?
In 1980 I was a 27 year old sculptor who was living and working south of the Thames at Butlers Wharf. The whole of the 1980s proved to be a very stimulating and productive point in my life and career. A lot of opportunities were beginning to come my way and I began to understand the sculptural path I wished to take with my work

How did your work develop during this time?
From a studio-based activity to site-specific activity. This meant the gallery became in part the inspiration for the idea and in certain instances parts of the gallery were enlisted into the idea. The gallery also and obviously became the studio to build in. 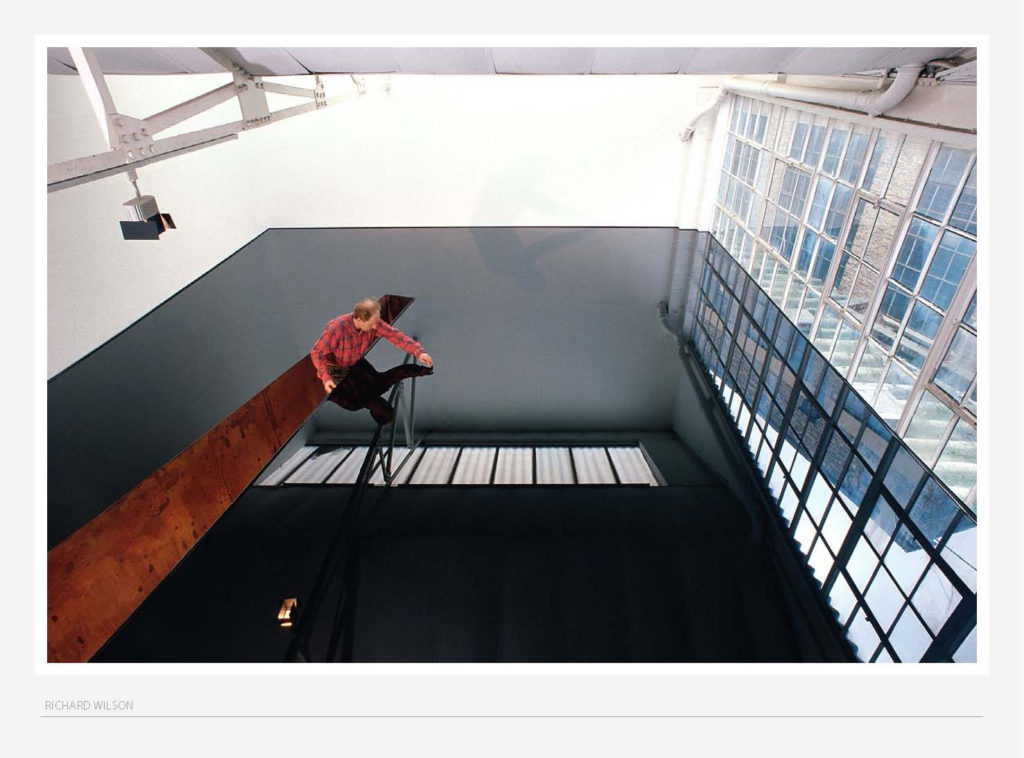 Were there any key moments or turning points in this period?
Butlers Wharf closed down in 1981 and I went on to co-found Chisenhale Works. I introduced myself to Robin Klassnik of Matt’s Gallery and secured my first show there in January 1985. Along with Anne Bean and the late Paul Burwell we co- founded the performance group Bow Gamelan Ensemble in 1983. In 1987 I produced the sump oil work 20:50 which was snatched up by Charles Saatchi. TSWA off site project was announced and I secured the Tyne Bridge location for a major installation in the South Tower. I was also chosen to exhibit in the Venice Aperto and the Sao Paulo Biennial.

An early mention of you and your work in Artists Newsletter is your TSWA 3D commission One Piece at a Time with Locus+ for the Tyne Bridge in Newcastle in April 1987. Could you talk about the importance of this project?
TSWA was a national project that through a selection process chose nine artists to produce a work for nine sites across the UK. I wanted to work in the Tyne Bridge, Newcastle and secured this location for a work titled One Piece at a Time. The work brought together two aspects of my practice being sculpture and sound making, and played itself over a given period of time of five weeks.

The piece developed and morphed during this period from a completely visual experience to an acoustical experience. The work comprised of over 1000 suspended car parts in the South Tower that over five weeks were cut from the ceiling to drop and crash to the floor. The sounds of the crashes were recorded and thereby accumulated until on the last day only approximately 40 bits were still suspended but you could hear over 960 crashing sounds. A lot of roughness around the edges – this was all pre-digital age. 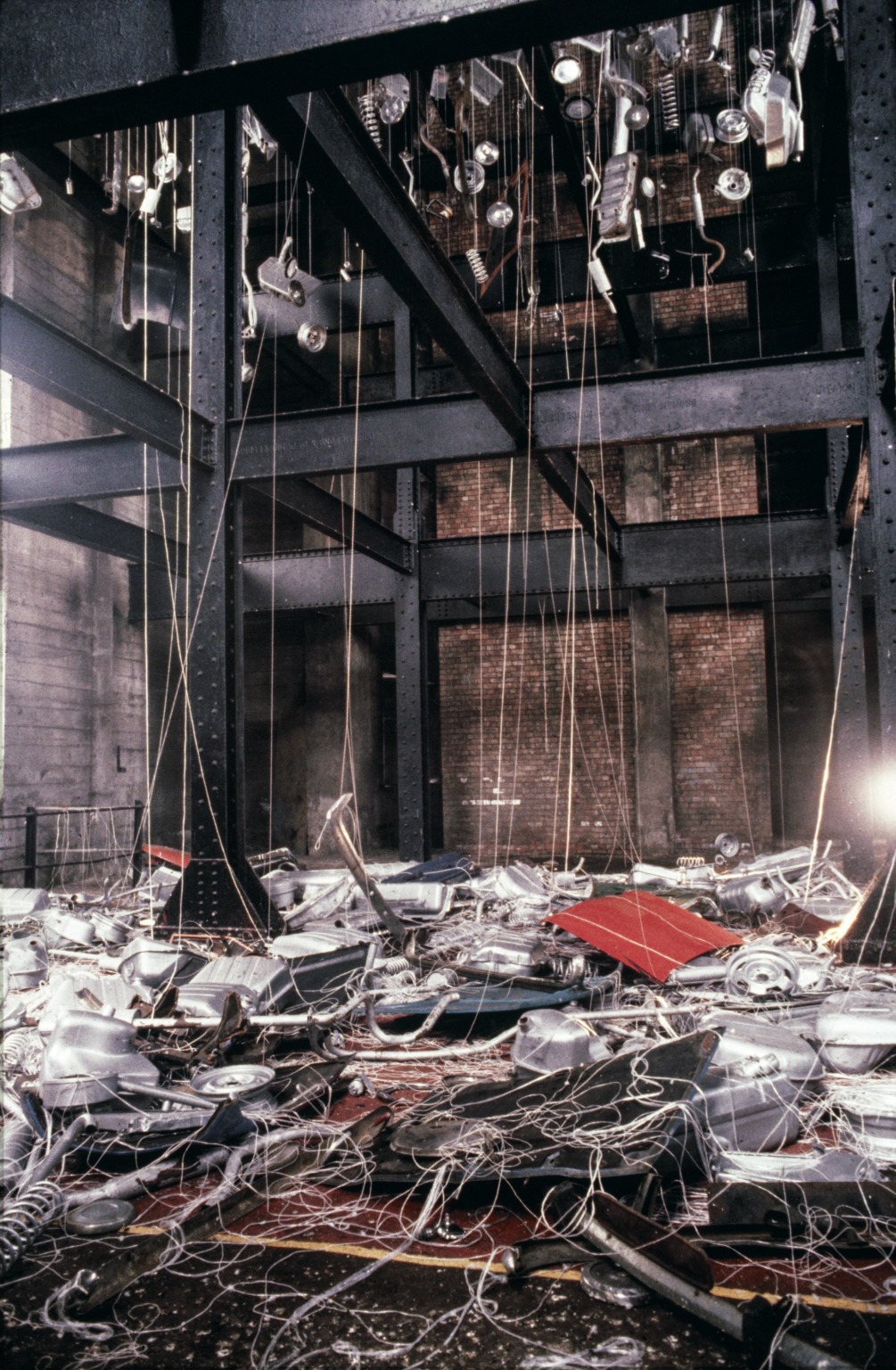 What role did a-n play in your development and career?
It offered more promotion through one-to-one in-depth interviews about shows or specific works. I even made the front cover!

How significant was a-n in raising the pressing issues of the times?
a-n was one of only a handful of magazines available in the 1980s that concerned itself with the practice of art and being an artist. It was an all-encompassing magazine that ran critical articles on artists, shows or movements. It advertised shows and jobs and in fact any opportunities for artists. At the time it was the only way to discover opportunities. 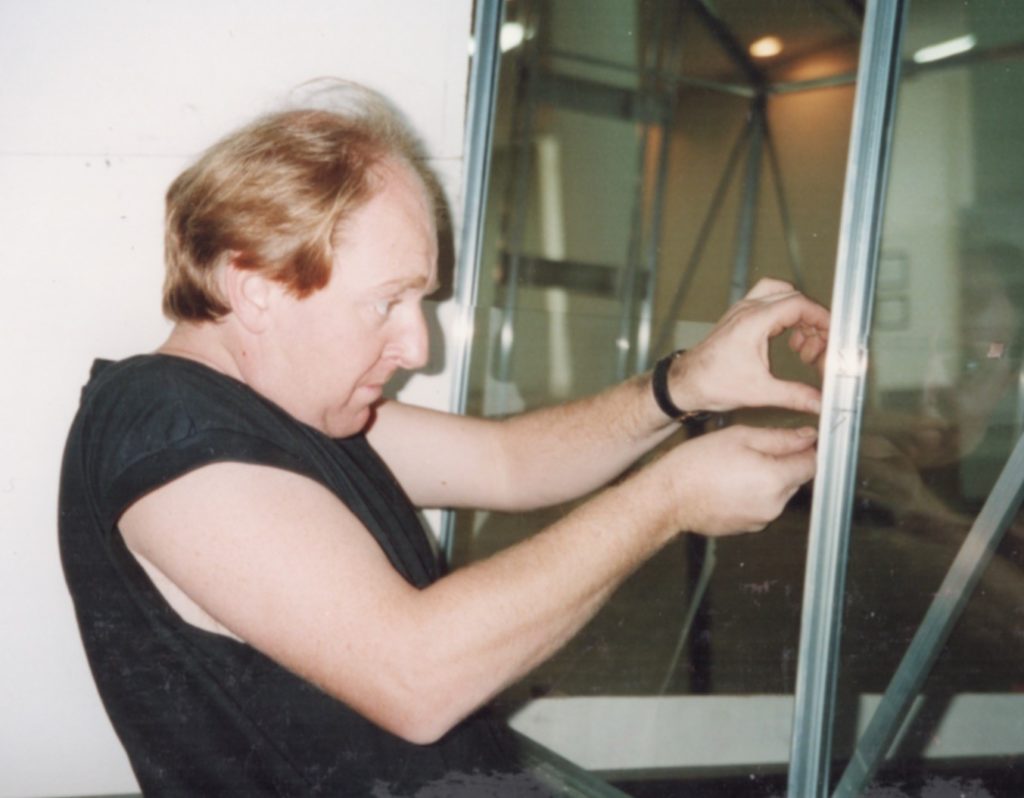 40 years on, what are the key changes for young artists starting out now?
Although there are more artists leaving art school now there certainly is more opportunity regarding galleries, grants and organised studio spaces. The biggest change relating to my practice is that there were no home computers until the 1980s. Before this, no internet and no emails or social media. And certainly no digital documentation. I remember being amazed at what faxing could do!

What advice would you give your younger self?
Remember not to dance to someone else’s tune but to be yourself. When I was a student in the early 1970s nobody instructed you in the politics or the business of art. I would probably now take more notice of this, but I would also remind myself that not all the work done simply for the money turns out to be the best artwork or experience. 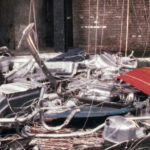