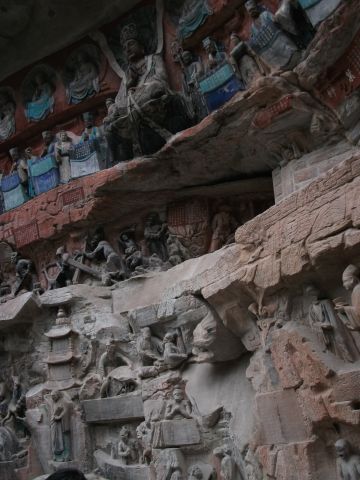 Nina Chua and Jessica Longmore will be Artists in Residence at the 501 Contemporary Artspace, Chongqing, China during November 2010. Whilst in Chongqing we will be working on individual projects, but will be taking part in a series of daily discussions with each other regarding the progression of the work, which we will jointly document on this blog. We would like to thank Arts Council England for funding this project.

I flew from Chongqing to Hong Kong on the 11th December and after a weekend of tourism I returned to Manchester on the 13th December.

As our residency in China is now over, this blog will now be paused. It will be resumed in the spring when we will present our work in the UK during a symposium that we are organising at the Chinese Art Centre in Manchester.

For further information about the planned symposium, or on the work of Jessica Longmore or Nina Chua, please contact us:

Throughout the latter part of my time in Chongqing, I had the overwhelming urge to seek out something old and something green. With this in mind I took a mini bus into the Sichuan mountains to visit Dazu.

Dazu is a Unesco World Heritage Site, about 2 ½ hours drive from Chongqing. It contains thousands of Buddhist cliff carvings and statues scattered over 40 sites. I visited Baoding Shan one of the most popular sites. Individually the sculptures are beautiful; exquisite faces with fragments of technicolour and gold leaf – collectively they are astounding; the scale, the quantity and the complex stories being told – however too soon you are herded round the site, bundled back into the mini-bus and driven back to Chongqing (via a knife superstore where we had a demonstration on chopping radishes).

Re-entering Chongqing after a brief visit to the Sichuan mountains was far more shocking than our initial drive from the airport. It doesn’t take long to leave the lush (although still shrouded in ‘mist’) green of the mountains and bamboo groves and again be surrounded by the concrete of the city. This time the concrete seems utterly unrelenting. The density of the tower blocks is more apparent and the skeleton skyscrapers – abandoned mid construction – are abundant. We’ve been told that the tower blocks are built with a life expectancy of 20 years. We are viewing them after 10 and already they look diseased and decrepit. I don’t want this to be my lasting impression of Chongqing.

Goodbyes
I have nearly a week left in China, but today is Nina’s last day so we spent it saying good bye and thanking the people we have met along the way. Nina completed her activity at the river bank by taking bags of fruit to the people who live by the river and who have helped her over the last few weeks. We then had a tea party in the gallery for all the students who have helped us during the exhibiton process.

Finally we took 17 people out for hot pot. Hot pot is what Chongqing in famous for in China, it is a very social practice which involves people sitting round a bubbling pan of spicy broth. What makes Chongqing hot pot special is the huge amounts of chilli and Sichuan pepper which is added to the soup. The experience of eating Sichuan Pepper, a friend of mine described as being like having a disco going on, on your tongue. It makes your whole mouth pulsate and then leaves it almost completely numb.

Lots of ingredients are brought to the table to be added to the hotpot. Today this included pig’s brains, cubes of congealed blood, chicken intestines, headless fish still wriggling on the plate and slices of tripe that look like a carved up leather bag. It is perfectly possible to be a vegetarian in China, but you need to prepare yourself for what, alongside your tofu and vegetables, may also be occupying the table. I had prepared myself very well, but I’m quite relieved I won’t have to go through this too many more times.

The day of the exhibition
The work I am exhibiting is constructed from the artefacts of my endeavour – the bottles of water and bags of sand I have gathered during the residency. I have three pieces of work. The first is water taken from two sources, the Jialing River and the Yangtze River, contained in drinking water bottles. I don’t feel entirely satisfied with this work, it is not a risk or a challenge; it’s the straightforward presentation of artifacts as work, perhaps a document of the activity that took place over a short period of time. I returned to the Jialing today with empty bottles to be filled, I found the the area fenced off undergoing re-development work.

The second work is a construction I made to collect rainwater. Previously it stood outside waiting for rain, now it stands redundant inside the gallery. The third work has a different sort of energy, the artefacts have become the building blocks for a sculpture. It feels like the most complete work I have made during the residency. My endeavour continues, tomorrow I will collect more water, bring it to the gallery and add it to the exhibition.

Suddenly the time seems all too short, in less than 2 days I will be leaving for the UK.

These are my immediate thoughts following the exhibition opening. 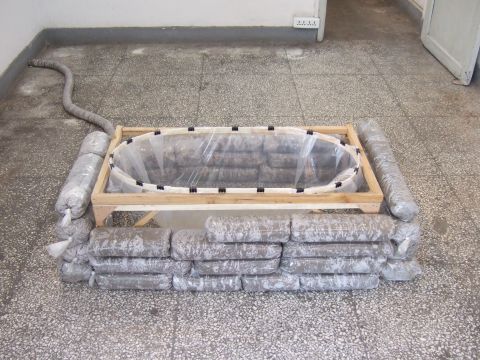 Our exhibition opens tomorrow. Over the last few days I have been trying to come to a decision about what to show. Three weeks really isn’t enough time to make and show work, especially when you’re in an environment where arrangements keep changing and new experiences bombard you at every turn. The Himalaya Bookstore has 4 small gallery spaces. Nina has chosen the 2 adjoing spaces and I will have the two white cube galleries, one with a window to the street and one on the top floor.

To formally present work in this way after 3 week feels wrong – however the process of exhibiting forces you to make decisions. Decisions which may have taken months to reach – or may never have been made at all. For me this pressure has resulted in me exhibiting in a medium I am very uneasy about.

For Objects for a Studio (my ongoing project where I work in other artists’ studios) I have no qualms about showing photographs. The photograph itself is integral to the framework of the project: one day, one studio, one photograph. However Objects for a Studio has only formed a tiny fraction of my residency in Chongqing, I have therefore decided to show additional work. The work I have chosen is also photographs; a decision I have struggled greatly with. This is not because of any prejudice against the medium, but rather that it doesn’t quite feel like my work. Deciding to show images has forced me to see them as work. Whether this decision was the right one remains to be seen, but it is important to make mistakes sometimes. 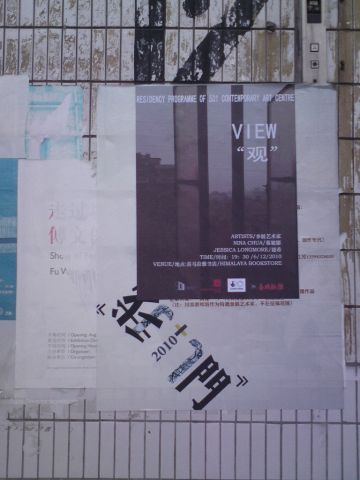