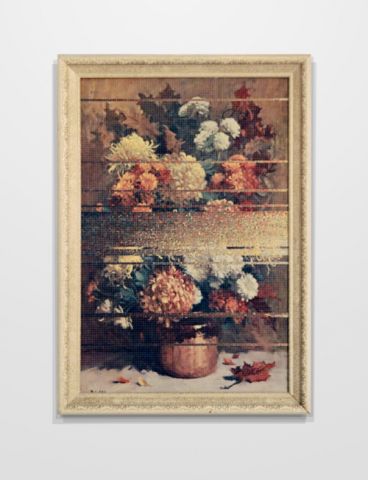 Our Final Day of Studio Visits

First visit of te day was to the studio of Antoine Renard down in Neukolln. As we entered the space we were confronted by the very unusual sight of what looked like an array of hybrid Horse Chestnut/Venus Fly Trap plants taking their nutrients from energy drinks.

It was early in the day so maybe we could have been excused for thinking we were not yet at full processing capacity. But on further inspection what we thought we saw was in fact what we saw. The plants in question are highly toxic plants which naturally grow wild around Berlin; this crop had been cultivated from just one plant. The source of nutrients was specifically Halal energy drinks, straight from the can.

Renard’s work is multi-faceted, taking form through sculpture, video and photography, somehow combining topics as diverse as capitalism and sanitation. Popular culture comes into play through the reappropriation of ad-campaigns for said energy drinks.

Stephan Takkides (who also goes by the pseudonym Vokzal) was the next artist to welcome us into his studio. As his alias suggested to me, he once resided in Vauxhall, London. Now based in Berlin his work takes inspiration from his surroundings in Germany, the UK and also his native Cyprus.

Very softly spoken, at times I felt Takkides struggled to convey his feeling towards his own work. It was fortunate, in that respect, that I felt his work spoke for itself. In particular, his video piece, Umland, which takes the viewer on a narrative journey outside of the city to where previously inhabited sites have been taken back by nature. Led by a ficticious narrator, based by Takkides on a version of himself, we are taken on a cinematic exploration of Berlin’s outskirts. Long static shots absorb the surrounding while the narrator posits a history of the landscape.

The work itself could be seen as self referencial and it certainly reflects Takkides’s personality, perhaps even better than he could himself.

Spiros Hadjidjanos hosted our final studio visit of the day. Having read his website it was somewhat of a disappointment to see his work in person and to hear the explanation behind the work.

Tha majority of his work is based on the idea of data storage and transfer. While his website often goes deep into the detail of this subject area and how he is exploring it, in person Hadjidjanos’s explanations seemed shallow, incomplete and often without grounding.

I must admit that the problem with studio visits can often be that the visitors do not focus on the same works that the artist might have hoped. The first work we were introduced to, Network Sculpture, is a direct representation of data flow, using aluminium strips to represent the flow of data. The main, perhaps only, question that we could ask was ‘why?’.

It would be wrong of me to expect to like every piece of work of every artist we visit. Sometimes works need time to reveal themselves to you, and this is what makes this side of the curators role so difficult. On this initial reflection, Stephan Takkides’s work really stood out to me. Perhaps in a few weeks time I will look back and something will have clicked for me with the work of Renard and Hajidjanos. By then it will be too late.

Today we invited “Cultural Producers” from 4 different organisations based in Berlin.

I was very interested by Anette Schäfer’s practice as creative director and curator of Trampoline. Trampoline Agency for Art and Media was initially established in 1997 in Nottingham, UK. It has since expanded to a base in Berlin while maintaining an office in Nottingham.

Trampoline offers support to artists working within the realms of technology and digital culture. Through the production of festivals, exhibitions and other curated projects Trampoline aims to aid the development of artists’ projects and research.

The areas that Trampoline moves are of particular interest to me; media, digital culture and public programming, all within three strands of curation, production and knowledge transfer.

They have worked with some big names, including Heath Bunting who is a big influence on my current research subjects.

Iepe (The Joker) Rubinh is a Dutch artist who has been based in Berlin for the past 15 years. He is the man behind such public art projects as The Joker Performances and Painting Reality.

Iepe’s latest project is the creation of a new sport, Chess Boxing. Chess Boxing was first visualised by French comicbook author, Enki Bilal. And it was Bilal’s initial idea that inspired Iepe to realise the initial idea into an internationally recognised sport that challenges the participants both physically and mentally. The perfect sport? Well, I’ll always be a lover of the ‘beautiful game’ but I find this project fascinating and I hope that the initial success of Chess Boxing since the first world championship fight in 2003 continues to grow.

During conversation Iepe mentioned that he first moved to Berlin with the vision of going to film school. Although that did not work out, you can clearly see through his use of video and how his works are documented that film still forms a major aspect of his practice, particulalrly affecting how his projects are perceived.

tête is a project space situated in the Prenzlauerberg district of Berlin at the former TÄT art space.

The space is operated as a time share for artists to make use of the space for a month at a time. There is no limitation to in what way artists utilise building as long as it is returned to a suitable state by the end of each residency.

Benji, one of the main organiser of the space with April, spoke of how he like the programming to be free and undefined. As stated on their website “tête has the potential, even destiny, to become an art space as social experiment”. This is certainly not how would approach running a space of this nature.

I am interested in the idea of a gallery as a social experiment, but I am also aware that each artist is relying on a space’s director or curator to uphold the integrety of that artist’s practice by programming them alongside artists of similar ability and approach. The nature of a time-share is that anybody can be positioned alongside anybody else in a schedule and this can have a detrimental effect on how an artist is perceived by a regularly attending audience.

In fact, I feel that a space of this nature will struggle to maintain a regular audience if said audience is not exposed to a regulated and carefully formulated programme of exhibitions and events.

While working alongside Benji, April also organises an artist residency programme, Picture Berlin, each summer at tête. The five week residency offers artists the opportunity to develop their practice while also engaging in the Berlin art scene through art and contemporary photography.

Lorenzo is an artist and an exhibition display designer. He will returning to Node soon to discuss the display techniques we will be using for our forthcoming exhibition. I will talk more about Lorenzo and his practice following this forthcoming visit.

I am an artist whose practice is focused around the curatorial. Currently conducting research into the intersection between artist and curator roles