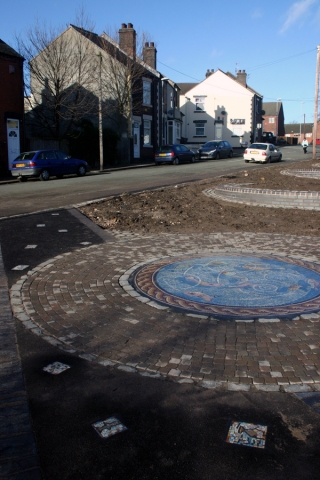 I speak estury english and I live in N.E Kent now, but for this project I am working up north, well… the midlands. Very near where my father grew up in fact. I am creating a mosaic focal point for a communal green space.

This is probably the last post regarding this job, and the installation went very well indeed considering the weather conditions.

Everyone concerned was very pleased with the outcome and pats on the back all round…blah blah you know.

There is one final thing I would like to say though:

If your working in a school, get the head teacher on board, especially if your contact at the school is under preasure and unable to deliver what is rerquired.

The point of this project fell at the last fence. The cavalry did not arrive at the eleventh hour. Do you remember I told you earlier that the school had back dated clearners wages to pay and no covering staff were employed to cover sickness and absence. Well that is still reverberating around the school with teachers streatched beyond capacity. As a result no teachers were able to bring the children to the site to stick the mosaic fish they had made a month or so earlier into the pathways on site.

Badly needed regeneration is arriving in Burslem now, ownership, social inclusion and socialy engaged practice is being carried out by artists designers etc. But I feel sad that my project did not show the process to completion, the exercises in the classroom remain in the classroom for the pupils. I wanted them to see how the stuff they generated was applied to the upgrading of their community.

I remember maths at school, it was so pointless to me, if I had been shown its application in the real world I may not have struggled so much. This point is crucial to many kids, especially like the ones living in this neighbourhood.

I feel my project was highjacked in a point proving show. Both by the regenerators and the people trying to implement the regeneration without enough resources.

Maybe I am making a big deal of a small thing and turning into a synical grumpy old man. It was a very successfull project and I shoul'nt spend twenty minutes whinging on!

Blimey, that would have been embaressing!

I had to write all the names of various stake holders on this mosaic. I emailed the paymasters an image pre installtion, just to say I had finished and would install next week.

I forgot to include the main funders name. Just one of them blind spots I wrote so many feckin names on it, all retro constructed when the thing was all cut up, I got confused.

So I had to unstack it and do a bit of surgery.

God I'm so grumpy, and its nearly xmas. Spent most of the afternoon and all this evening cutting this mosaic into sections. Cos it is so cold and damp the paper and glue does not really dry, and scalpel cuts are really just tearing the paper.

I can not be bothered to even explain the implication of this. I should do em on sticky back plastic or something in the winter see if that works better?

Installation in Jan, how cold how damp ? Just a nightmare . 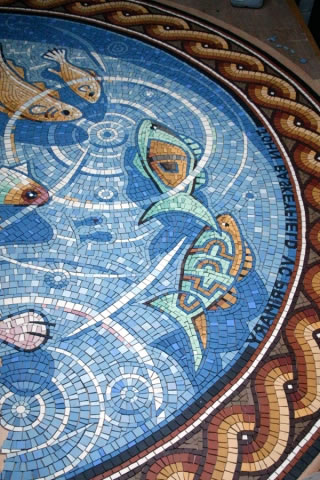 In my other blog I concluded the work was civic and I think this work is as well.

It is about encouraging these school pupils (young citizens) to interact and mingle with self confidence in their community. Just like these fish will swim about in the environment being built for them by Groundwork, Midland Heart and Renew. A parralel symbolic world. I hope they grow and thrive adapt to their habitat and become the best fish in the severn seas or the Severn Towns or is it six.

So today I managed to rework 6-7 of these fish. I quite like working on them as I'm not too precious about them. Just go with the flow.

I sent images of them to the paymasters…..I hope they meet with an affirmative nod, as I dont really have a plan B for them!

I want these kids to feel they are their fish, I think it is important, I want them to believe that they really did it like that. I want them to bring their mum and say 'Look this is what I was trying to tell you about, We made them in school'.