Our work evolved from discussion about how digitisation is rapidly replacing paper copies of records and documents. Amazingly Sonia had an old Apple Mac with the screen removed. Looking at the circuit boards behind the screen was thought provoking. The components were surprisingly dusty and dead looking. Also because the area of circuit boards revealed by removing the screen was obviously screen shaped, it could be easily imagined in a “trippy” kind of experience that what was being viewed was a digital computer image of circuit boards rather than the real circuit boards.

In a playful move we decided to project a video of Ordnance Survey maps being “worked upon” on to the Apple Mac’s circuit boards. This included using a soldering iron to melt solder along roads marked on the maps and sticking copper tape and drawing along the roads. OS maps were chosen as these are no longer being printed due to the increasing use of maps available on the internet. The video was amusing with a cluster of hands busy at work but also beautiful with glistening balls of melted solder and lines of ink snaking along the roads. Furthermore although the map was visible in the video it sometimes appeared that our hands holding the soldering iron and other tools were working on the circuit boards rather than the map. 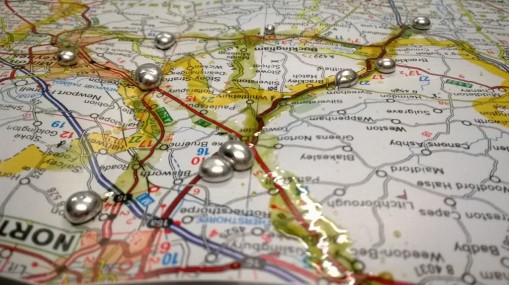 The work starkly revealed the reality of where we are now increasing entrusting our records and documents. Also a curious and somehow appropriate disorientation was created throughout with the Apple Mac’s circuit boards sometimes being perceived as a real object and sometimes as a digital version of itself.

Instructions for an art work.

Continuing with the theme of acknowledging the debt we owe to paper as a carrier of information and knowledge, we focused on human rights legislation. Although in many cases originally written on vellum, the dissemination of information about our legal rights has been through printed paper copies.

Rather than creating a piece which straightforwardly gave homage, we perversely embroidered mocking graffiti on to paper copies of the Magna Carta and the Human Rights Act 1998. A laborious and oddly affectionate form of defacement, the embroidery demonstrates in a light hearted way the rights we have to freedom of speech and to challenge authority as enshrined in this legislation.

How to overcome the issue of distance between ourselves? We chose to swap materials and processes to use in our respective studios in lieu of spending time with each other. Without observing what the other has learned from using the tools exchanged, we encountered the same problems with new solutions. This experiment led to a respect of one another’s strengths and a proposal to further “translate” each other’s works.

On 29 October 2014, Campbell, Connors & Griffin met at TN2 5SY and followed these instructions:

On 2 October 2014, Barker, Brown and Connors met at 11 am at SE13 and followed these instructions:

turn left and walk for 10 steps; look for an alley……

Incorporating our mutual interest in redacting or obscuring text, we created a piece which in a small way acknowledges the sheer volume of knowledge and thought that has been made available to all of us through paper. The titles of 57 major religious and secular texts have been painted on transparent plastic sheets. When the sheets are overlaid and back lit, no single title is legible but the accumulation of words is beautiful if not enlightening.

We are so different. We are so alike. Our aesthetics and way of making are polarised. We are both determined to collaborate and make something that astonishes. Niki’s work is light handed, transparent, mostly about light. My work, with the same materials, is rough and frantic. Responding to colour from the summer project, we found and made links to each other’s work using wire and coloured vinyl and tape. Borrowing from the influence of the show at the Tate, Malevich: Revolutionary of Russian Art, we created a suspended 3-D drawing developed in a very short and intense space of time. 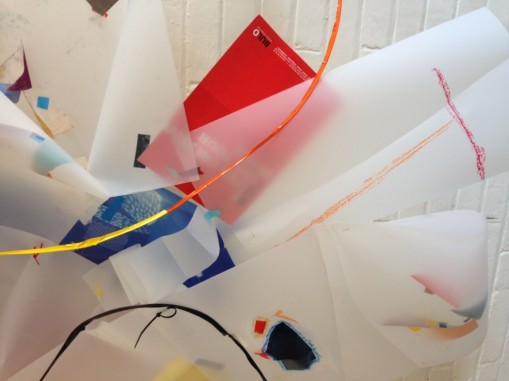 Starting from some thoughts about machinery and folding, we looked at small machine made paper pots – the sort of thing found in fast food Restaurants. Could we reform or deconstruct/ manipulate them with the human hand?  This only led us so far – we needed more, and so looked at folding or at creasing rather than folding – we had little idea were this idea of would lead us to.

We had a machine that would normally smooth out creases in fabric and remove water  – i.e. an old mangle. We played with putting though paper that had oil, ink, salt – even baked beans and crisps, sandwiched between two pieces of tracing paper. We wanted to see what would happen to the liquid inside as it went through the mangle.

This did give some interesting results but what we did get excited about was the creases that were developing as the paper went through the mangle.

So from there, we started experimenting with a range of papers: A2 drawing paper ,  a whole 20m length of greaseproof paper, and a pile of A4 photocopier paper.

We filmed each process.  The films are as fascinating and compelling in a completely different way to the paper sculptural objects formed in the process of mangling.

Over the Summer the collaboration was progressed as a postal project in the form of three Paper Chains. Each chain began with the posting of an object to the first recipient who in response created work over the course of one week. This work was then posted to the next person in the chain and so on until the chain had been completed.

The three Paper Chains began with the following objects: