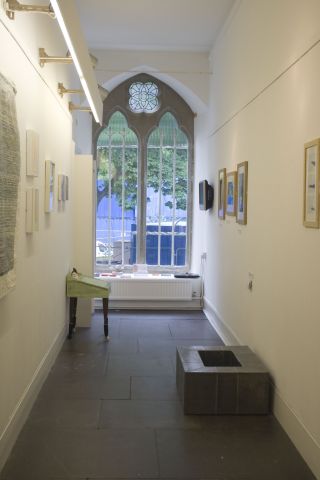 The BA Hons Fine Art (awarded by Glyndwr University) aims to be a challenging and exciting experience taught by practicing artists with National and International reputations.

It is the day after the Graduation Ceremony. Since the last blog the Degree Show has come and gone, the video accompaniment to the premiere of ‘Voyager’ (composed by Warren Greveson) at Beaumaris Festival 2012 took place on July 6 and a show of our Degree Work opened last night at Bangor Museum and Art Gallery with the associated celebrations. Oh yes, and I also gave a talk at the Beaumaris Festival on the origins and development of my obsession with the sublime while at Coleg Menai.

My work in the Entrance Corridor to the Art Block was completed on-time and it was great to discuss my work with friends who visited the show. The video work I produced for the Beaumaris Festival gig also set me thinking about re-working an earlier video project involving footage and sound from Dinorwig Power Station and the National Slate Museum. I will do that later in the summer. The re-hang of work at the Bangor Museum and Art Gallery meant that ‘stone in a sea of fog’ was now seen against a slate-flag floor and looks serene, a great improvement over the industrial carpet of the entrance corridor in the Degree Show. (I know, I know, it was my choice to show it there…!) I also accompanied that with the photographic fog interventions from that previous module.

I would like to take this opportunity to thank all the staff on the BA Fine Art programme at Coleg Menai for all their tutoring/help over the course of the degree and to extend very special thanks to Helen Jones and Emrys Williams, our exemplary final year course tutors.

I also wish to thank Anne for all her love and unstinted support.

I hadn’t really expected this feeling but yesterday I felt a final sense of completion on going through the Degree Ceremony…strange but satisfying.

Completed the installation of the pieces into the corridor. Made a last-minute adjustment to the lighting in the ‘sublime’ vitrine…it now looks right after matching the last light to the first 3. Completed the ‘blacking-out’ of the void interior and installed it’s soundtrack, many thanks to 2nd year students Mark and Stephen for the interior matt black paint-job. The installation of the DVD/projector into the cube went OK but an issue over screen dimensions resulted in a projected elipse rather than a circle. A trawl through the “set-up” procedures of the projector and the DVD player sorted the problem last night. First pics of the installation are posted.

One week to go and this last 2 weeks has been seriously busy, the making of 3 large pieces has been a real physical challenge. However, they are almost complete. The dressing of the vitrines (‘the difference between sublime and beautiful’) will hopefully be completed tomorrow and the completion of the ‘black-out’ of the interior of ‘site specific void 1’ should also be done, thanks to help from 2nd year students Mark and Stephen. Today I have adjusted the soundtrack of the video to play inside the cube (‘forcing the emotional sequence of the sublime experience’) and its DVD/projection system can now be installed, probably on Tuesday.

Once complete, I will photograph the pieces and post the “show” pictures.

The ‘fear’ piece is nearly complete. After trials with the projector inside the cube I decided to build-in active ventilation rather than passive ventilation as originally planned. The top of the cube now has an instrument fan and air intake holes. The bonus is that the sides and base of the cube have no holes in them..so far! Also adjusted the joint for the cantilever to support the cube, this was very tight and courtesy of a very sharp chisel and the steady hand of Barry (thanks!) this is now a good fit.

The next job was to design and make the enclosures to go over the vitrines in the piece comparing sublime with beauty. The width had been set by the amount of space needed to contain the lighting for each tank. The decision was then to either have a rectangular (lower in height) or a square profile (taller). Since, the viewing port to the tank was to be square and the ‘fear’ piece to be exhibited near it had a square element (the cube) I decided that the square seemed to be the right decision. So square it was and the wood cutting list was drawn-up and the materials purchased. The cutting of the pieces took a morning and the frame was assembled that afternoon and the boxes were assembled the next day. I still find myself quite edgy when building stuff like this as design or cutting errors can really set you back. However, I am relieved to say my brain, eyes and hands did their stuff again.

I have also been thinking about the titles for the pieces and have taken the decision that I want to be direct about them. The title for the vitrines is to be ‘How to distinguish between the sublime and beauty’ and the ‘fear’ piece is to be ‘Forcing the blended emotions of the sublime’. The void piece is to be ‘Site specific void 1’ as it is hoped that the building of void pieces into un-promising places could turn into a series. Such thinking reminded me of Dan Flavin who commented that he was able to get his early light pieces into the normally unworkable parts of galleries…we’ll see.

Its been a good few days. Built the rear-projection screen assembly for “Fear”. This was a mixture of optimising the screen size for the present piece and for the screen to be useful for other work. Ended up with a square which was good for the current piece and then gave me a large square screen (75×75 cm) …a less common format. The “stretching” of the screen took me back to Year 1. modules! Also completed the painting of the interior of the tubes, the 10cm roller worked well.

Yesterday worked on the cantilever support system for mounting the cube off the staircase. I learnt some woodwork and was introduced to the mysteries and craft of the “half cross joint”…thanks for the “hand-holding” Barry! I then made the plate assemblies which will bolt the crossed-cantilever to the landing area of the staircase. So far so good.