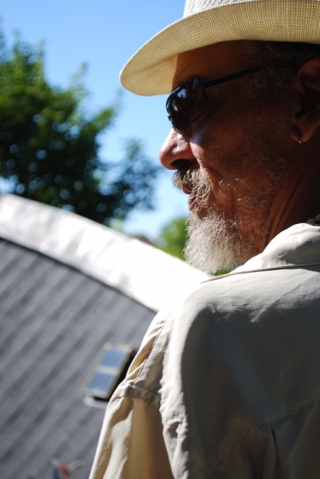 0 Comments
Viewing single post of blog Consultant for the Higher Academy of Happiness.

My guide to Utopia yesterday was Morten. I paid him but I think he enjoyed it. I took 444 shots for the time and motion study for three pounds. Morten is comfortable with an audience, although it was his first time in about 30 years of being the subject. It gave me the chance to connect the work and the place, and work out how he felt about his job without any verbal exchange (he spoke Danish). I am conscious of the Hawthorne effect though, so I did the tourist tour last week to give my study validity. The evidence is conclusive. He’s happy in his work. All of his customers were happy too.

So let me tell you about Henrik who has lived here for over 30 years. He used to be an art teacher. People think he’s mad because he left his job to be an artist full-time. It’s not the Danish way. But he’d sold some paintings the day I saw him. The financial exchange validates him as an artist – that someone appreciates his work enough to pay for it. The sun was shining, he lives in a stunning location with good neighbours, and he has a beautiful studio. He worked very hard to build up to this point, but now he feels a rich man. Not much money, but rich.

I asked Henrik about how Christiania organises itself. No – it’s not a democracy – he thinks. There are 700 adults and all of them are leaders. So to him it’s more a system of anarchy and consensus. Everyone is creative in finding ways to express their opinions. He does poster projects sometimes on contentious issues, and he paints the big meetings so people can see what’s going on.

The literature on leadership makes it obvious that you need people prepared to follow sometimes. Morten was a good leader and we followed him up the garden path quite happily. We were free to leave at any point, but we wanted to stay. We had our reasons.

But now I must go. I have fifteen minutes left before my gathering. Posters, balloons and banner up. Feedback mechanisms in place for cooperative inquiry. Recording equipment set up. Nails manicured, uniform on but hair a little fluffy. Fluffy is not a good look for consultants.

If no one comes I will pump up balloons for three hours.