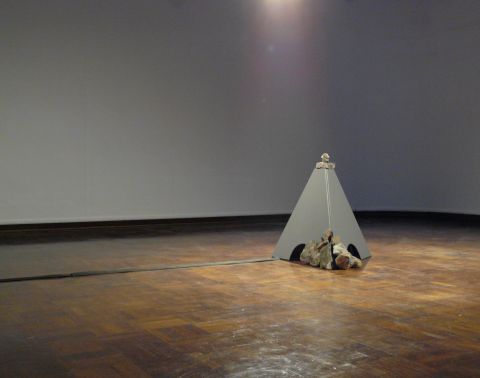 Cooper Summer Residency is a space for artists to reflect upon and experiment with new ideas and strategies that will extend their practice. The residency is based on a desire to investigate the means and potential of working in an environment that supports the exchange and sharing of resources and knowledge.

I think my work is almost about nothing, It’s just about being there – anywhere – being a witness from the point of view of an artist. Richard Long

Having just had two years of very intensive working, I felt the need to step back from the direction my practice has taken and continues to take. I’d been immersed with video and sound installation which both, together and apart, seem very natural outlets for my creative energy. For the Cooper Summer Residency at DJCAD I decided to work on sound installation, aimed to develop my field recording practice, and to help my confidence with presenting this kind of audio material within a gallery and installation context.

I had heard of the mountain Schiehallion as a child on summer holidays in Perthshire and climbed the Munro in 2010 for the first time. Shiehallion is in the middle of the country and is one of the few mountains to have an almost symmetrical pyramidal peak if viewed from one side. The other side slopes up in a long ascent.

I remembered vaguely some scraps of information about an experiment happening on the slopes of the mountain in the 19th century and set out to find out more during the residency. A group of geologists affiliated to the Royal Society of London set up three research stations on Schiehallion’s slopes with the aim to measure the mass of the mountain peak. It was thought that if this could be calculated by measuring longitude and latitude distances, then the mass of the Earth could be calculated my a ratio.

I was unsuccessful in finding out if the geologists were successful.

I did climb the mountain again.

My assumption that the experiment was a failure, a moment in time that is now assigned to the records of the Royal Society of London, was what inspired me to visit the mountain and convey my own experience of Schiehallion on a day in July 2011. With a field recorder I walked and recorded as I went; water, ambiance, birds, space, distance. I thought it would be windy but on that day it was so still, at times there was no breath in the air. I felt the sounds were travelling across the vast moor landscape to my ears alone. Everything felt far away and yet, close enough to have been waiting thousands of years for my arrival that day. I hesitate to say, but there was a feeling of the sublime on that day as I sat on stones and looked out and listened to nothing and everything.

My installation has three sides, like the mountain; the three come together to form a pyramid with speakers underneath the structure. The sounds I collected are split into three channels of sound, coming from three speakers. Within the gallery you can travel around the object, and as you do so, the audio emerges and returns to silence. Contemplation to take you somewhere else…or perhaps onto Schiehallion or another mountain in another moment in time that is your own.

A framing and a rendering of something.

An engagement with culture and history through researching a specific situation.

…something happened in the past (a historical event, childhood experience). Portraying a contemporary rendering of the event or place. ﻿

Gibson, D., (2010) Joseph Beuys 40th Anniversary Journey to The Moor of Rannoch and the Road to the Isles. Published by Studio International, accessed 21/07/11 http://www.studio-international.co.uk/reports/Dema…

Getting annoyed that my car is tiny

Trying to get a lift to Aberdeen with some stones

We have two days left on the residency before we clear out the gallery space and dissapear almost as if we have never been. Three weeks seems like a long time but once it begins, it vanishes like breath in the wind.

It is quite a strange experiene to have something forming in such a condensed period of time. I hope that the projects we present in September will begin a discursive and critial dialogue with our audience but it seems a bit hard to judge at this point.

We have all taken different approaches to what we plan to include in the exhibition – Sam with stop-motion animation, Valentina with single-channel video and me with a multi-channel sound installation.

Some themes we are all concerned with – the everyday, the event or moment in time, the mundane, the familiar.

After a few days of wet weather I headed out on the 13th of July to climb Schiehallion mountain. Accompanied by my boyfriend Neil, we made good time and spent most of the day in the remote landscape.

The walk was quite quiet and there were a few other groups out on the mountain, couples, families and lone ramblers. What amazed me most was the stillness of the day. There was hardly any wind, hardly a sound and so, I was aware of the vastness on the space around me. What sounds there were seemed to travel across the mountainside to reach me and seemed for my ears only. Maybe no-one else was hearing the sounds I was or were hearing them in a different way than I.

The recordings I’ve chosen are an attempt to express the space of the landscape and my experience within it. My composition (currently) is from the foot to the peak, a form of document of my ascent on Schiehallion.

The Key to a Fragile Silence by jim crumley

Introductions and revisiting Dundee. Familiar faces and new faces. We were introduced to all the available resources at DJCAD and within the University of Dundee and our accomodation at the DCA.

First day in the Cooper Gallery and it is beginning to look a bit like a working space. Stuff strewn around, laptops out with fruit, snacks and coffee.

KW: I’m developing an experimental sound installation for the residency. This will focus on the site of Schiehallion mountain in Perthshire. The mountain has an unusual symetrical shape – a pyramidal peak. There was an experiement here in the 18th century to calcualte the mass on the mountain and from this, estimate a value for the mass of the earth.

I found this to be a beautiful gesture, both curious and magical, and also slightly mysterious.

At the moment I’m drawing up a schedule to gather field recordings and checking for when it’s not raining. I’m planning to complete the mountain walk, collecting audio material and images as I go. Due to the wind, I have contact mics to try to pick up sound of vibrating objects (fencing, branches, water, e.t.c.) and a stereo mic for capturing the soundscape.

Notes and Records of the Royal Society of London 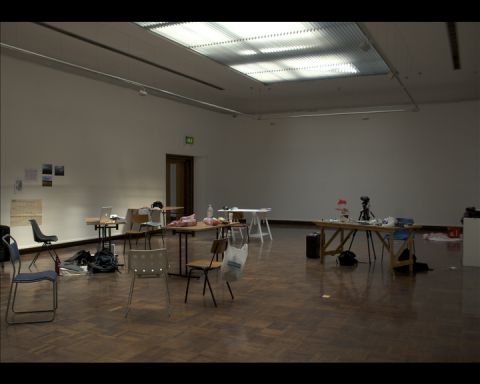