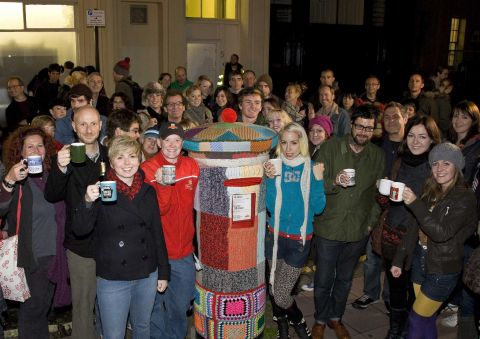 A single large format photograph of a group of postal workers thanking members of a knitting circle for their gift of a homemade cosy for their local post box. A gesture of solidarity to celebrate the hidden industry of those who work at night.
Commissioned by Brighton Photo Biennial as part of Brighton and Hove Council’s white night/nuit blanche events.
www.bpb.org.uk
Photographs. Flickr:davidjonathanswain

My record of everyone at the grand ceremonial opening, for the archive. Another photo taken later in the night when the Cosy had taken up residence.

The pillar box is in the city centre, it was Saturday night. Brighton gets packed with leery clubbers. When the Cosy was on the postbox, individuals, couples and groups were running across the road to hug it. Useful that there was a cash point next to it. There was a lot of rubbing, stroking and laughing. There was a real warmth. Post box as pet. Enjoying the middle of the night textures.

Lots of mobile phone photography. Lots of posing. Some people were trying the cosy on, with hilarious results. Then their mates insisting they put it back, “No! Properly!” A group of young women turned out to be a knitting circle on a day trip from London. The whole Cosy thing was proof that Brighton was an ‘excellent’ place, “We don’t have anything like this in London, London’s dead.” Positive conversations, no agression. No-one said that it was stupid or absurd. It was accepted. One couple even managed to buy a post card, and a stamp, then photograph themselves posting it. This at one thirty am. A very heartening experience all round. Will they wake up the next morning puzzling whether they had seen it and why it was there?

There were several offers of help should I need to knit another, including a faroese version. One change of plan, I didn’t leave the cosy in place as I had intended. It needs to be made into a one piece object, not three pieces as it is now. The top comes off too easily, the main sleeve is only Velcro’d together. My intention is to set it up again in the next few weeks, on a night when it isn’t raining (another design flaw), sew it together and then leave it. Cast it adrift.

According to Tila, whose birthday it is and who is Mexican, November 12th is their national Day of the Postman, Dia del Cartero. It is to acknowledge the hard work, daily difficulties and constancy of those who work in the postal service. There are different days for this in the different southern American countries. You are encouraged to leave small gifts, sweets, pastries in your mailbox to show your appreciation. Tila says that on November 12th there is no delivery or collection. When she was younger she had gone to the delivery office hoping for birthday presents. It was closed. But there were people inside. She explained. She was let in and given a slice of postal worker cake and her birthday cards.

In my local post office there was the usual queue of misery. Two windows out of eight open. “Any picture stamps?” “What? No we’ve just got the usual, Christmas stamps are out soon.” “Ok, four of them then.” Flicking through the ledger “Oh, there are these, must have come out in the summer, you want them?” holds up a sheet of post box stamps brought out to celebrate the 200th anniversary of the earliest known surviving posting slot, outside Wakefield Post Office in Yorkshire.

Behind the front door when I get home, my first letter since the suspension of the strike last week. A cheesy Christmas card from the Royal Mail.

It’s all getting confusing. 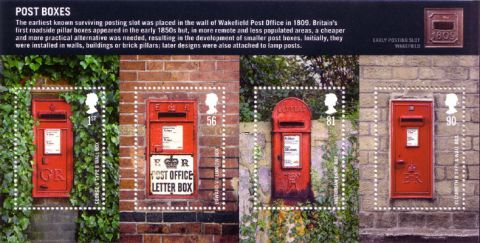 At last. This morning my copy of ‘Searching for Sebald’ arrived on an inter-library loan. A beautifully produced collection of essays and photographs edited by Lise Patt. It costs thirty quid, but is 650 pages of luxury. I have only had it in the house an hour and already I have the urge to splash out up the Amazon.

Subtitled ‘photography after WG Sebald’ this book answers and creates so many questions. Thoughts that have been ricocheting around in my head for the past few years. Now I realise that there are many people who have been having the same ambiguous feelings towards Sebald’s novels. Each contributor examines part of his fiction and looks again at the images used alongside the stories. The truth, the lies and the dubious evidence of authenticity. Reproducing the photo’s and often their source material in grainy black and white. Throughout the different essayists are skeptical, yet in loving awe of Sebald’s method and occasional dry humour. Are the pictures suggestive, rather than illustrations of the text? Are both edited and cropped? How and why? What does he leave out? What impression does the combination creates in the readers head? What can it mean to the state of literature and visual arts? Is it a movement?

As if to answer the editors own question, two parts of the book are well chosen reports and images from projects by other artists who use writing and fiction as one tool in their work. There is an intimate examination of all of Sebalds work, novels, poetry and essays. He oversaw the layout of the different translations and editions too so there is painstaking analysis of the different ways each edition is laid out, and what that says about Sebalds overall ambition. When Sebald died he was a lecturer in film studies in UEA so there are several articles dealing with his film references and his cinematic style. One regret that seeps out continually, in the essays and the photographs is the frustration and regret that Sebald died when he did. What would he have done next? What would he have thought to this thick brick of a book?

Searching For Sebald, PHOTOGRAPHY AFTER W.G.SEBALD. Edited by Lise Patt with Christine Dillhohner. The Institute of Cultural Inquiry. Los Angeles (2007) 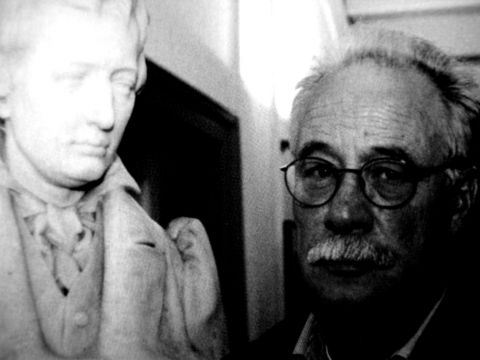 On the train to Manchester yesterday the lady in the adjoining seat told me about her four children, how they’d all become doctors. ‘Not enough time for meals’ was her comment on their cosmopolitan life styles. We shared her snack, made that morning ‘At five am’ she said ‘before I started out’. It was half term, she was having the day off. All the time we were talking she was weaving a delicate crocheted decoration ‘Not crochet, tatting.” It was almost finished, the edging to go around a collar on a dress. I couldn’t understand how you would start. Too complex, too intricate, how did it all hold together? She let me have a try with the tatting chatel. It looked like a small weaving shuttle. She may have said shuttle. Very thin yarn, cotton almost was wound round a wheel inside. There were no needles. You just followed a pattern of knots, back and forth with the chatel, ‘off the internet, couldn’t find the pattern anywhere else’. She was from Dehli, she thought that tatting originated in the US. She let me have a small sample. This took her less than ten minutes to make. 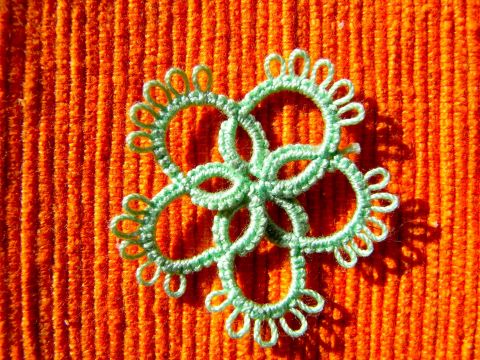 Grudgingly, I’m impressed how Sol are promoting their beer around the city centre of Brighton. They have paid for the refitting of security shutters for small shops. An expensive item for desperate shops with dwindling turnovers. The Sol logo is now at street level around the fun n’ booze zone, presumably without the need for planning permission. More significantly it will appear in the background of student group photo’s, hen night shots, pissed up portraits and lots of flickr and facebook updates. Cunning. Now their advert has weedled its way on to the Artist Talking blog site. 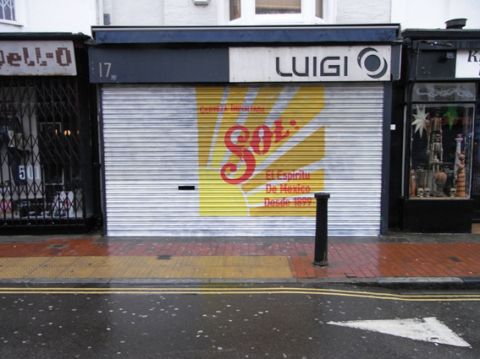