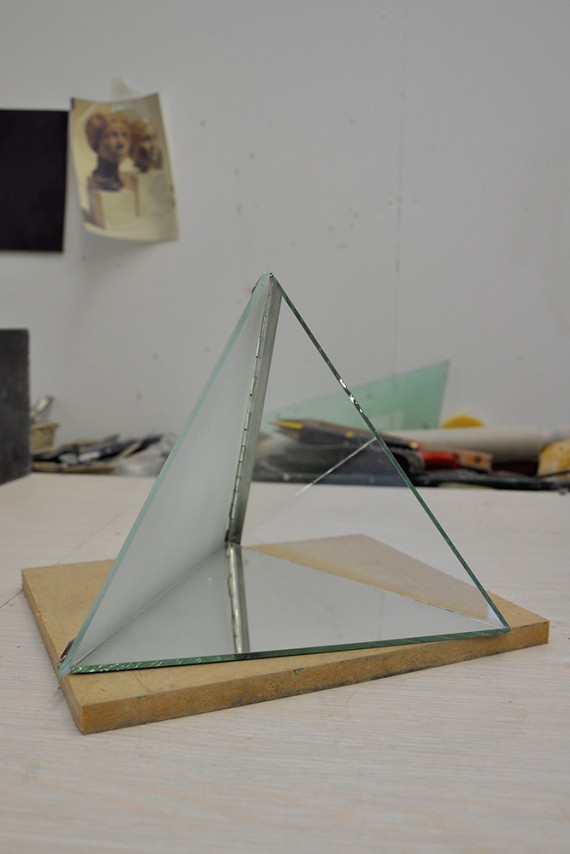 “Each framework supports the reflections of a concatenated interior. The interior structure of the room surrounding the work is instantaneously undermined … “Space” is permuted into a multiplicity of directions. One becomes conscious of space attenuated in the form of elusive flat planes. The space is both crystalline and collapsible…” robertsmithson.com

Robert Smithson describes his Mirrored Crystal Structures – which I understand to be his steel and mirrored plastic sculptures of 1963-4, inspired by Donald Judd’s pink plexiglass box. To me the pieces are at once garish hall of mirrors and ominous science fiction emblems, fragmenting, fracturing space around them.

Rob has now glued two 20x20x20cm pyramids. The panels unfold smoothly, elegantly (some independently! when set gently in motion). Looking around and through their variously shiny-clear, translucent and mirrored panels, the shapes appear to coalesce into one complex, crystalline structure.

On Sunday we made a paper maquette for a new, taller tetrahedron, one that echoes more closely those of the aviary frame. We talked about possibilities for suspending the objects (again, a mobile architecture) also of fusing two pyramids base-to-base to create an even more crystal-like form.

For now, we’ve decided to work towards a ‘landscape’ of three pyramids, a triad, each slightly differently proportioned. Imagining this landscape, I keep returning to the silhouette of Wassily Luckhardt’s futuristic Cinema, which reminded Rob of this Norman Akroyd etching of the archipelago of St Kilda.