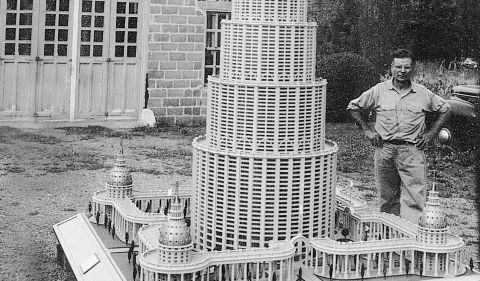 Some reflections on the Venice Biennale, and ‘The Encyclopaedic Palace’ curated show described in a number of reviews as ‘blindingly apolitical’.

Since returning from the Venice Biennale, I’ve been reflecting on the political content of the show, partly provoked by reviews describing ‘The Encyclopaedic Palace’ show as ‘blindingly apolitical’, added to this, conversations with visitors who felt that the exhibition wilfully ignored artworks dealing with recent subjects of conflict and crisis such as the ‘Arab Spring’, the ‘Occupy’ movement and the ongoing financial recession.

The fact that The Encyclopaedic Palace installed at its centre, the figure of the ‘outsider’ (the show is based on a model palace to house all worldly knowledge, constructed by self-taught Italian-American artist Marino Auriti in 1955) and therefore deals in a complex way with those who find themselves to be included and excluded from society, was for some, not political enough, or perhaps not exhibiting the right brand of ‘politics’.

We might think of the job of the curator as being to discern, to pick and choose, and therefore ultimately to include and to exclude, and partly this might account for why it’s often perceived as an unpopular role, (amongst artists at least!). Set in contrast to this, The Encyclopaedic Palace felt to my mind curatorially generous, warm, honest, direct and taking a broad view of what we might constitute as art, including the work of many who haven’t had the privilege to be recognised by the world of art, or those who wouldn’t consider themselves as ‘artists’.

The show, curated by Massimiliano Gioni, appeared to celebrate the joy of making and to acknowledge that there are many reasons to do this, beyond receiving validation from the art world. It is as though the show is a dare to the art world, to open its collective eyes and start to look at the things that people make for what they are, rather then what they represent, or might be associated with.

The negative criticism around the exhibition might say something about which brand of politics has been on the international biennale shopping list for some time now, with curators and selectors thriving on works that explicitly deal with situations of conflict or division, and seeking out artists who hail from these places.

Another show at the biennale to create equal ripples of discussion afterwards was Richard Mosse’s The Enclave at the Irish pavilion. The artist used military grade infrared film (used to detect camouflaged troops) to picture scenes from war-torn, Democratic Republic of the Congo during trips between 2012/2013. His film and photographic images are both sublimely beautiful and unremittingly disturbing, depicting landscapes in lush pinkish hues alongside images of lifeless bodies strewn along roadsides. The notion is that the civil war in the country goes largely unreported within the wider world, a parallel for this is the fact that the now obsolete 16mm infrared film visualises what we cannot see naturally with our eyes.

Much of the wider conversation around Mosse’s show has been to do with the ethics of picturing conflict in a manner that has been described as ‘gorgeous.’ The logic for it seems to be that the viewer is torn between repulsion at the depiction of severe violence and mesmerization at the incredible beauty of it all, the point being that we are equally repulsed and attracted by images of conflict and distress, especially those remote from our own situations.

A recurring question is: when one has gone through the cycles of repulsion and attraction, do we not settle finally on attraction? Can these images really confer something of life as it is lived (or endured) in the Congo today? A collectable coffee table-style book is due to be published at the end of the project, meaning that we have the option to purchase this, and close the book on the back story.

Perhaps the wider question is, what do we expect from artists working in these situations? It seems that Mosse’s intention has been to draw our attention to something that is being overlooked and in this, we could say that he has been successful. What we take away from the experience of his art, and what remains is however, very much open to question.