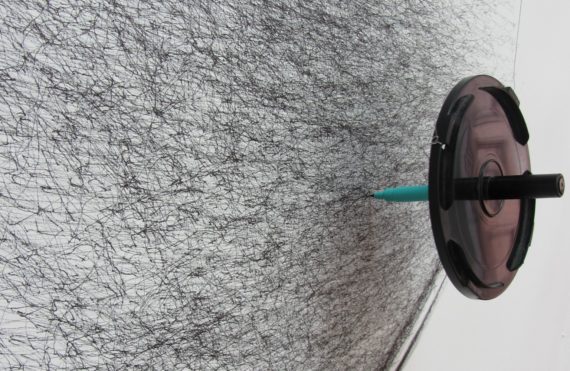 I am delighted to have been awarded an A-N Professional Development Bursary to help me explore how the use of a mobile phone app might benefit my practice.  I currently create collaborative drawings by asking volunteers to undertake walks whilst carrying GPS handsets. The data from these journeys is then reinterpreted by drawing-machines to  produce cumulative maps.  I’m hopeful that by including the use of an app in the process, it will help me to reach a wider audience and produce work of greater complexity and scale.  This blog will document my experience of learning about the development of apps and how they might be useful to me as an artist.

I’ve started to develop the wireframes for the design of the app – these are like storyboards to describe each step of the process to aid a developer later. They also help work out the logical structure of the app and highlight any possibilities for unexpected behaviours and how to deal with them, without restricting the users’ experience.  There will always be situations that arise that cannot be anticipated, so building in ways to get people back on track is important, as I wouldn’t want them to give up entirely and not complete their walks or upload their data.  In working with these wireframes, I’ve found that I’ve still got lots of technical questions about what’s possible in the final app and though there’s a lot of information available online, attending the workshop in Brighton highlighted for me the benefit of talking to other people who are engaged in the same process and can share their knowledge and experience.  One such group is local to me, Pervasive Media Studio based at Watershed in Bristol, and is a diverse community of artists, technologists and creative companies who give support across a huge variety of projects.  Also, the work that was generated from the ‘outLines’ exhibition in Wells has gone on to be shown at RWA in Bristol, where there has been lots of opportunities to talk to other artists about the process of making and how technology can be used within it.

I’m finding that I’ve got lots of possibilities and different directions that I could go in, therefore it’s useful to carry out some ‘user centered testing’ to help focus the development of an app, so I was pleased to be invited to show my drawing machine installation, ‘Retracing Your Steps’ in the exhibition ‘outLines’ at Heritage Courtyard Studios in Wells, Somerset where aspects of contemporary drawing practice were being investigated. This allowed me to work with volunteers to map the City of Wells with my usual method of working, asking them to go on walks carrying GPS handsets, whilst at the same time have discussions with them to investigate the possibility of using an app and what the difference to the outcome would be.  I asked them questions about how they might engage with an app and what would motivate them to use it.  We talked about the practicalities of what would their first contact be regarding the app and would they be prepared to download it before coming to the gallery?  It became clear that the process needed to be quick and easy, otherwise the frustrations of it would put people off entirely.  Some of the volunteers commented that they felt the GPS handsets made them feel as if they were involved more in the process and that if they were using their own mobile phones, they were more likely to get distracted by messages or emails and also have more practical worries such as battery life.  Others though, who wanted to be involved in the walking but couldn’t arrange to be at the venue when I was there, felt that it would have been advantageous to have been able to use their own phones with an app and walk whenever they were able to, uploading the data remotely.  I thought that there might be a distinct difference between those who were very familiar with using apps on their phones and those who were less confident, but it appeared that it was the physical act of being given a GPS handset, which immediately focused their minds on the task and invited them to interact with it.  This level of engagement is something that the user interface of an app is going to have to achieve to be in any way successful.  Also, there has to be additional functions that an app will provide over a simple GPS handset, to motivate the user to want to use it.  All of this information is invaluable in planning and writing the user specification for the app, which will help inform the functional specification.

Following on from the workshop, I’ve started to look at how an app could enhance my current practice and complement my existing drawing installations.  In addition to achieving greater flexibility by allowing participants to use their own mobile devices rather than my handsets, there is an opportunity to increase the level of interactively during the walk – possibly by giving instructions to carry out tasks, specifically based on their current GPS location (eg take a photo, record some audio or write a text message.  The results of these could then be automatically sent back to my website for inclusion in a digital installation as part of the collaborative project.  This would hopefully increase engagement during the walks, as well as give the audience in the gallery space an enhanced experience of this cumulative mapping process.  All of this could be achieved by an app, but my challenge with this is going to be how to motivate people to join in, without me being there to interact with them.

Currently, with my installations, I have a physical presence in the gallery – I talk to visitors to explain the process and encourage them to participate; I give out handsets and meet them on their return to download their data; I collect their feedback and enjoy the subsequent discussions I have with them.  This is all possible on a small scale, but if I want to be able to reach a larger audience, I need to find other ways of working, so I’m keen to explore whether an app is ever going to come close to simulating that level of contact and whether the lack of interaction between the participants and myself is, on balance, too much of a disadvantage.  After all, there is no point developing something that works beautifully in its technical functionality, but nobody wants to use it as it is too cold and clinical and doesn’t instil in them any sense that this will be a fun and enjoyable process to be involved in.

Possible solutions could involve the use of video introductions at the gallery, as well as en route, triggered by GPS position.  The results from other participant’s involvement could be shared during the walks, to help highlight the collaborative nature of the process and inspire involvement.  A participant could choose to have their own electronic ‘visitor guide’ to accompany them on their walk, to give encouragement and suggestions on participation, or to give technical help for pausing/restarting the process etc.

All of these possibilities are giving me lots to think about – every artist whose practice relies on the interaction and input from audiences will have similar considerations as it’s not always possible to be in situ in the gallery all the time and trying to find ways to compensate for that can be difficult.

I am starting my exploration into mobile phone apps by attending a 2-day workshop at Blast Theory in Brighton.  I have some existing knowledge of coding, which I use when programming my kinetic drawing-machines – however, I have no experience of working with apps and mobile phones, so I am attending the workshop to learn about platforms and processes.  It is specifically aimed at developing apps for art and artists, rather than more general uses, giving practical advice on how to progress from the initial ideas, through to creating the final app.

From the outset, this workshop has proved to be invaluable – breaking down all the stages of development from the initial consideration of whether an app is the right tool to use and, if so, how do I want it to look and feel – what will be the essence of the user’s experience?

The workshop brought together a wide range of artists and art practitioners, all of whom had different needs and wish-lists of what they wanted to gain from using apps, but which raised very similar issues and considerations, thus allowing us to have positive discussions and gain possible resolutions.

It’s made me realise that I have been approaching this development of my practice with pre-conceived ideas of the final outcome, rather than allowing the process to evolve and then interrogate it along the way.  I’ve received great advice on how to initially explore the concept of the app by playing around with ideas in a much simpler way – eg using text messages, audio players, cameras, gps handsets and even pen and paper, to simulate functions and interactions.  Coding of apps can be time-consuming and expensive, so pre-testing processes by creating prototypes out of existing technologies and having ‘dry-runs’, is a more efficient way of gaining an insight into how well the final app might operate and highlighting any issues that might be problematic.

These playful interactions have also allowed me to think outside of the processes that I currently employ, as an app will allow me to expand the relationship I can have with the user. This has advantages as well as disadvantages – I can increase the audience participation and scope of projects, however, this raises the likelihood of a greater sense of detachment caused by the use of technology and possible complications of data protection and privacy.  The more complicated a process becomes, the greater the opportunity for malfunctions and therefore user frustration.  In my current practice, I have a lot of control over the user’s participation, but with the use of an app, I am handing over a larger proportion of this control to the user and thus inviting a higher likelihood of chaos and unexpected results – something I am drawn to, but also something that could cause total failure of the process and so therefore render it useless.

Over the two days, we covered in detail the practicalities of using off the shelf solutions, versus bespoke – what to consider when deciding on whether to learn to code yourself, or employ a developer.  It looked at the specifications of the different platforms, along with their respective advantages and disadvantages.  It looked at the cost and time implications of all of the above and at times, it seemed daunting to even think about embarking on this process, but the encouragement I received and the straight-forward practical advice on breaking down everything into smaller steps, makes it feel more achievable.

In addition to this, being able to listen to other artists and arts organisations talk about how they want to use apps to engage with their audiences was a very positive experience.  I think sometimes we are afraid of new technologies and how we can use them, so it was great that there was such a variety of projects under consideration and included so many people, with varying degrees of trepidation, who were being courageous in overcoming their fears in order to investigate them.