No I’m not sick and I do alright as an artist, but I am my strongest critic and I mark myself as ‘must try harder’. So I am.

Its a cold, grey morning in Stockholm. The weather forecast says rain. What’s coming out of the sky is white and flake-shaped. Anywhere else they’d call it snow. It’s not really settling here but there are plenty of cars around with a half-inch coating on the roof. They’re all Volvos. All estates.

But that’s outside. I’m now inside one of the hundreds, if not thousands, of little coffee houses that make up the city. No Starbucks in sight, but plenty of good strong hot coffee and pastries galore.

My professional development project had been going at a much slower pace than originally expected. My first prospective mentors unexpectedly changed their minds and decided they didn’t know any more than I did already. Actually they joked I presumed they were professional and developed in the first place. Ouch!

So it was a great relief to finally meet up with someone who was happy for me to pick their brains about stuff. One of the areas I was looking to develop in my practise was the realisation of pieces of real scale in the landscape. I’ve been increasingly interested in the emotional effect of scale on an audience and how landscapes can create immersive experiences. I’m currently working on three major landscape works, including one across a valley, and another stretching over 18 miles. Artistically these are pretty well formed, however the realisation of pieces of such scale present a whole new level of logistical challenges.

There aren’t many artists in the world working with scale to chat with (I actually have a list). In fact the only ones to have ever created an artwork over a valley and over a 20 mile distance are Christo & Jeanne-Claude. While it’s always good to talk with artists, for this PD project I’m more interested in the logistical side, so it was with great pleasure that I was able to meet up with Wolfgang Volz while I was in Stockholm.

Wolfgang has been a core element of Christo’s team for over 40 years. As well as being the eyes of Christo as a photographer, he is also technical director for all the large temporary installations. When it comes to realising immense temporary artworks in the landscape, there’s no one more experienced in the world than Wolfgang Volz.

Over that great Swedish tradition of ‘fika’ – everything takes place over coffee – we worked our way through the importance of finding the right engineers, managing install teams and testing everything every-which-way. 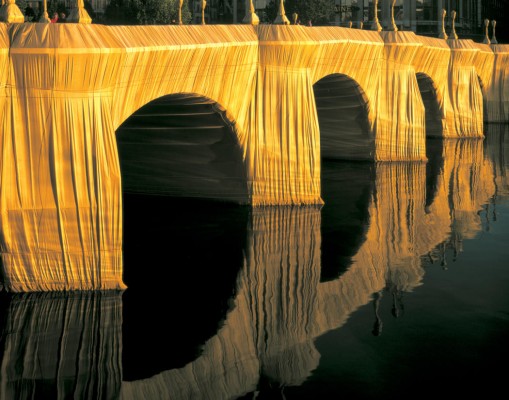 Because every project they do is different and every project is the first time something like that has ever been attempted, there’s no previous knowledge to fall back on. The only way to know how to do something and discover how it behaves is by doing it. It’s something I relate to in my own work but never really solved before. The solution that Wolfgang used was to do full-sized tests elsewhere first. Before they wrapped the Pont Neuf in Paris (1985) they found an even older bridge  some 30km away of a similar size over the same span and wrapped that first. Without the gaze of the public and media they were able to work out all the problems and the practicalities so when they came to do the final piece there were far fewer surprises.

The level of planning involved in the realisation of Christo’s work is mind-blowing. Yet, when working at that scale and level of public engagement I can see how it’s the only way to go. Large installs are built around a pyramid cascade of responsibility and management. Starting with the artist at the top right down to the unskilled install teams at the bottom. Even the unskilled teams undergo days of training beforehand so that come the day the piece just appears.

Of course all these extra things cost money. As Wolfgang pointed out, the older you get the more money your projects cost. But I’m serious about developing my practise and looking to make each piece of new work the best it can be. That ultimately is the most important for me.

Last year I went to see Christo’s Big Air Package in the Gasometer at Oberhausen in Germany. At over 100m high this was one of the largest single artworks I’d ever seen. The engineering was incredible for something so huge. Yet the €1m budget for the piece received no public funding and in fact was entirely self-sustaining through admission. That was a revelation to me – an understanding not only of the scale of the budgets involved but also that it’s possible for pieces like that to pay for themselves.

I’m sure this is something we’ll discuss further in future conversations. While each of my projects has its own unique logistical and technical issues, there’s much I can learn about the process of finding those solutions.

As Wolfgang said, he and Christo have been working out how to do projects for over 40 years now. They’ve never had the luxury that I have of learning from others. Of standing on the shoulders of giants. For that I’m grateful.

going for a walk

When things get complicated or I have so much information that I need to process, I go for a walk. There’s nothing like bucket loads of fresh air to clear the head and with miles and miles of lovely hills to explore where I live it’s doubly rewarding. There’s something about going for long walks that’s especially productive in the processing of data. Freed from the chains of staring at a screen, or a book or going round in circles in the studio, the monotony of putting one foot in front of the other, while just conscious enough about where you are going gives the brain a chance to do something easy and relax.

On my recent walks I’ve been trying to sort out in my head what it is exactly I want to know that will help me move my practice onwards. I had hoped that I would be further along this path than I actually am with the peer support. However, the barrier I’m finding the most taxing – and most unexpected – is not aiming high enough. It seems the longer you do this art game the number of true peers diminishes. Sure, every artist is a peer at one level and that’s something I’ll never just take for granted, but some words of wisdom I remember from the distant past told me that I should always be looking up. Always looking for advice from those above where you are. Recently I made contact with one of those on my list of people I wanted to talk to for this project. While it was good to know that they not only knew who I was and knew my work – and in fact were big fans of my work, which is always nice to discover – when I approached them about offering some professional development they told me I probably knew all they knew already and it became a very brief, but enjoyable conversation.

I hadn’t expected that.

Fortunately I have others on my list who are still happy to meet and offer advice and insight. However, I’m now looking what I thought was a long way up the professional ladder and it’s a lot harder to coordinate diaries for meetings.

There was a recent podcast by the editor of LensWork which made me think again about my peers. ‘Your Fellow Traveller’ talked about how we can all see further by standing on the shoulders of giants, but who are the giants we want to stand above? Besides the great and legendary artists there are also other artists who are treading the same path as you – your fellow travelers. I love the idea that no matter where we are heading – how remote or seemingly uncharted – there are others heading in the same direction. These are not competitors – art isn’t a race after all – but companions. Look to them as friends. Look to see what they’ve done and learn from their mistakes and build on their successes. By treading the same path in many ways they are helping you along too. Just knowing they are there and share the same values and destination as you is a comfort and also helps to gauge where you are in the greater map of art.

Seems walking as a metaphor is useful too.

So, here I am. Finally writing a blog on A-N. I’ve been blogging over on my own site for a while now – Mud’n’Art – where I’ve been musing on being an artist living in an isolated rural location. But that’s been more about my work and what inspires me. What gets the creative juices working and how a rural practice avoids the cliques and trends of the rest of the artworld (TM).

This occasional, and probably sporadic blog is less about the fluffy arty stuff and more about being sensible, effcient and generally professional in my work.

I’m an artist. For me it’s not just something I do because I like it, or because I think I’m good at it. It’s my livelihood. It’s what I do for a living. It’s all I do and has to feed me, clothe me and pay the mortgage. In short, it’s a business. I count myself fortunate that I manage to do this, to some extent, for a living. I know that for many artists this isn’t a viable option. For others it just ain’t going to happen. But this doesn’t mean I’m a better artist or that I know what I’m doing. In fact I know I’m not a better artist than lots of others and there are many ways in which I don’t know what I’m doing.

A few months ago I was lucky to recieve a re-view bursary from A-N. The purpose of this was to go on a journey to see how I can be a better artist and get a better understanding of what I’m doing. Regardless of how far along your career you are, there is still plenty to learn and buckets of room for improvement.

So, over the next few months I’m meeting and conversing with some people who I believe will help me move onwards and upwards. My work is often ambitious, and so is my list of mentors. Fortunately they seem just as excited by the opportunity as I am. It’s a good start.