New paintings… exploring the fantasy land of the familiar, the irony of art as artifice, in order to critique the position of the fantasized gaze…

Meet David. The great work of Michaelangelo reduced to jigsaw postcard. Unfortunately this was not the end of his troubles, as I have further mutilated him by swapping certain pieces I have appropriated sentiment to for the occasion.

The occasion was my 21st birthday, the postcard my father's belated birthday present sent from his holiday in Florence.

No hard feelings though! I now have another addition to my collection of characters, in whose presence I find a source of comforting obscurity.

Furthermore, let it be known I have since received another card, with cheque. 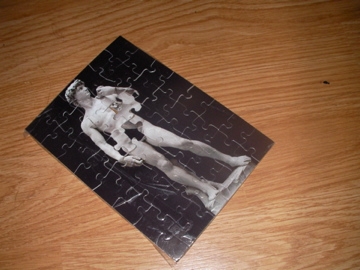 Now for Tiffany. Tiffany is a manikin who was left in my studio in 3rd year, became my friend when I painted on her hair and make-up, was given to my friend Brooke who later moved in with me, and thus reunited me with Tiffany once more. Brooke is now in Chicago.

Tiffany wears a myriad of articles, one of which is a feminist slogan t-shirt I made "OTHER ME" (the 'concept' was buying into feminism). She waits until she grows arms to drink from her 'love' cocktail glass.

For the meantime she waits, the lady in the frame, bearing witness to objectification. No wonder she has a creepy stare. 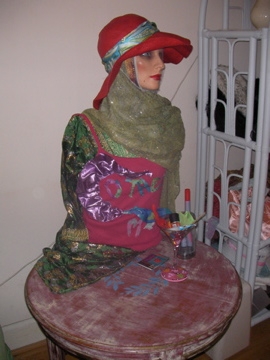 Here is Hugh. Hugh is a Ken doll who has been elevated to hermaphrodite status courtesy of my friend and peer Kaye Harper, who dotingly knitted him a bikini featuring both male and female reproductive systems.

He wares a 'guilty' badge I picked up from the Embassy Gallery in Edinburgh, from a sweetie jar where you were invited to donate money (which I did, but only the cost price) for a piece of art. I can into the possession of another from my friend Katie, who felt the guilt too penetrating on her lapel, even though I believe she payed more for hers than I.

Hugh stuffs his hand into a Sun Maid, whilst basking under 40W charity lamp with fringe. 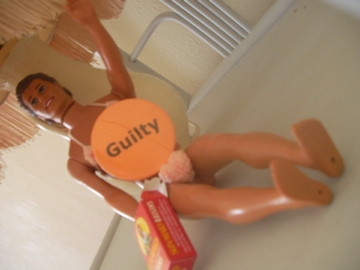 Meet the baby jesus. He began life as a girl, purchased from a charity shop in the south side of glasgow. His sex change constituted of having his hair chopped off. His body was already of pin cushion consistency, which was very in-keeping with a little line I wished to write on him.

You see, I believe we are all like little pin cushions, made to be pierced, and learning to manoeuvre like a cat whose whiskers have just been chopped.

He is only the baby jesus because he reminds me of the one doll I had as a child, since i didn't much like dolls, and I used him (Timmy) for the school nativity.

Having said that, I like him as an archetype. Its an interesting story.

There are many other weird and wonderful creatures in my glass menagerie…although none of them are so precious.

Hopefully I shall be able to introduce you all soon. 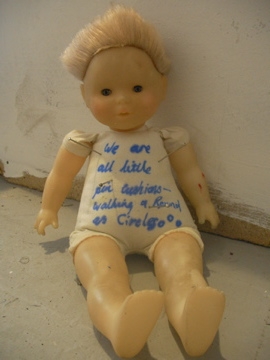