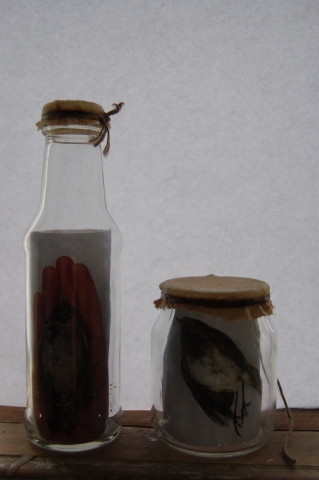 The blog started with the run up to my exhibition at Oriel Wrecsam in August – October 2008, and is now following on to the next one in November 2008 at Galeri and then onto a group show at Theatr Clwyd in 2009.

It's almost a year now since this particular blog started and I feel it has reached it's conclusion. The work has been made, has been shown and is now moving on.

I'll add a couple of images of work for the exhibition at Chapel Row Gallery in Bath and the British International Miniprint Exhibition.

I have found writing the blog really useful and it has become quite an important part of my creative practice in some ways. The exhibitions at Wrecsam and Caernarfon are now over and the one at Theatr Clwyd is a group show and opens at the end of the month. If you would like to follow my work further I now have a blog on WordPress steffanjoneshughes.wordpress.com

I would also like to point you towards the collaborative blogs from the Regional Print Centre, here on artists talking, which I am involved in.

In the meantime I think this will be my final post…

Haven't written for a while. Have had some good news and some bad news. The bad news is that I got turned down for another Arts Council funding grant. (See earlier in the year) This would have enabled me to develop a series of short films. Sadly this is not to be. I just hope that I'll be able to develop some of the ideas without support, and maybe put in again in 2009.

The good news is that i had a piece accepted at the British International Small Print touring exhibition so I'll have to get printing those before the end of January. I've also had an opportunitiy to show in an exhibition in Bath called Birds Bees and Butterflies at Chapel Row Gallery, which I'm quite excited about. I'm going to do some eggs and bottle pieces for that show.

I've also been writing a wordpress blog and you can see more pictures on my flickr account now.

The exhibition at Caernarfon finishes 10th January, as does Jeanette's at Flow and then its a group show at Theatr Clwyd at the end of January.

The next problem will be how to get J's work back from London.!

Bumped into Tim Pugh yesterday in Chester and we had a nice chat in the coffee shop. He's doing something at Cornerhouse this coming year, and also some thing for Wrexham I think.

Anyway workwise I always have a break at this time of year and then get cracking again on New Year's Day. A good way to start the new year. 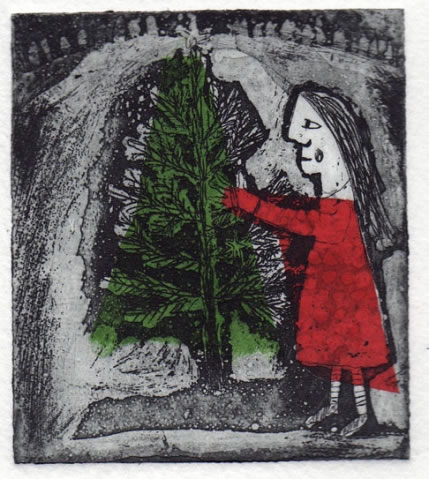 I just thought I would add some extra photos of the Galeri show.

I'm really happy with how it looked. Dawn Worsley and her assistant Owain did a really good job putting it up I thought. So thank you to them. The opening went well. Catrin spoke very nicely about me and my work and there was quite a good turnout. So thank you to them for coming and also Elen the director of Galeri.

I've been over there putting things in place and it's starting to look ok, even though I was feeling really rotten with a cough and chest infection, aching etc etc.

The piece Past Present and Future with all the doors etc is up and fills one wall, it's photographic and combines etchings, drypoints, screen, photocopy,and digital. It's a bit like an advent calendar. I hope people like it.

I've included lots of small prints as well as the large ones I had in Wrexham. It has a clean look with a lot of black and white.

anyway, opening's tomorrow night and Catrin Williams is going to open it.

Down in London for Jeanette's opening at Flow Gallery and also to see a few people about things at the print centre. Staying with Jeanette's cousin who lives in Henry Tate Mews in Streatham. Interestingly the living room was originally the ballroom and it is thought that this is where Henry Tate first held viewings of his art collection. The Flow exhibition looked really lovely (see my review on interface). Went to Tate Modern yesterday (tea opposite the wonderful Lindsay Duncan) and a trip to the Printroom in Hampstead. Also over to Spitalfields area.

It's Manchester Artists Book Fair today, Heather Prescott has taken everything over there so hopefully that will go well. I've sent over some new book works so we'll see.

Saw a few things I really liked in Tate. One of them a film by Maya Deren, Meshes in the Afternoon. I could really see how this influenced mainstream cinema, including Hitchcock. Really interesting that connection between art film, influencing mainstream cinema, influencing contemporary art such as Douglas Gordon. I want to take aspects of the noir into my own work and have always been inspired by the use of colour (specifically red in The Birds and technicolour in things like Rear Window).

Find visiting London exhausting but incredible. Had tea in Islington with our friends Julie and Douglas. So good to spend a bit of time with them…always wish it could be longer. Listened to some jazz. Saw Buckingham Palace up to Covent Garden… so many options for everything in London. It's just so nice to be based in north Wales but the opportunities open to artists and creative people are so limited compared to London. However, it's interesting that people seem unwilling to travel within London, north to south being seen as too far…