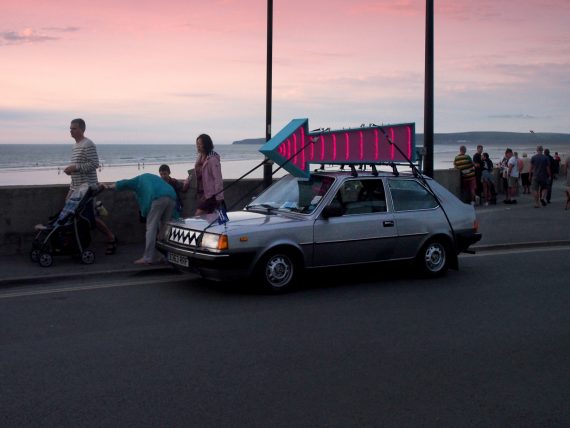 During the time working on the Souvenir box I had also found and bought a suitable Volvo  (albeit a 430 mile drive away in Darlington) to use for the artwork. A lot of what follows in this post was occurring alongside and informing the production of the box.

One problem I had was deciding what model of Volvo to use. We had 2 different models as I was growing up, the first being a Blue 3 door 1979 Volvo 343 with a blue interior and the 2nd a Silver 5 door 1991 Volvo 360 with grey interior. The advantage being that these were essentially the same basic car

What I managed to find was a 1985 model 3 door Volvo 340 that seemed to exist as the midpoint between the 2 vehicles. Age-wise it was almost exactly equidistant and spec and colouring had elements of each. The exterior being Silver, but with 3 Doors and the interior bein the navy Blue I remember from the first car. The dashboard also had elements of both models and most importantly it had the same slightly sickly smell of warm plastic on a hot day and the hinged rear windows I remember from sitting in the back seats.

The only drawback being some non original wheels and my need to drive it for 8 hours back to Cornwall from Darlington, and a fair bit of rust to sort out 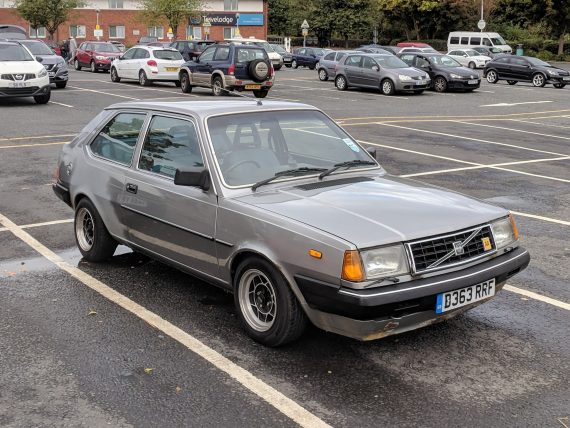 I’ve never been much of a car person and bar replacing a bulb or topping up oil have never really worked on a car. The process of replacing parts, fixing up elements, as well as refurbishing some original wheels and patching rusty bits helped me feel closer to my Father and the memories I have of him with his head under the bonnet, or legs appearing from underneath clutching an oily Haynes Manual. This also brought the work back around to one of it’s catalysts – the photograph taken of him, while fixing the car, making paper teeth to go in place of the grill, and pretending to be attacked by the car for my and my brothers amusement. 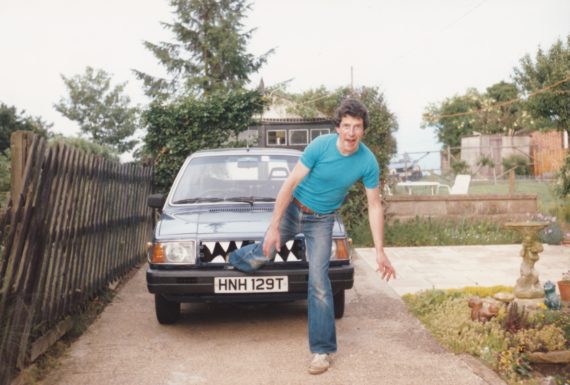 Although not part of my original plan there was no way I was going to be able to do this project without recreating that image in some way. Settling on making a more hardwearing version of the teeth out of wood to mount on a customised grill, hoping to bring some of the joy that photograph has brought me to those seeing the vehicle.
(Apparently working successfully, a video I shot of reactions to the car upon arrival in Westward Ho! includes a child shouting ‘The cars alive, the cars alive! excitedly to his parents)

The teeth also inspired the flag design for the sandcastle flags as part of the souvenir box and was also used to create fake diplomatic flags using the same design. I loved the idea of the car acting as representative for some imagined ‘better place’ in the West, playing with the way holidays seem to exist in this other world away from our normal reality. 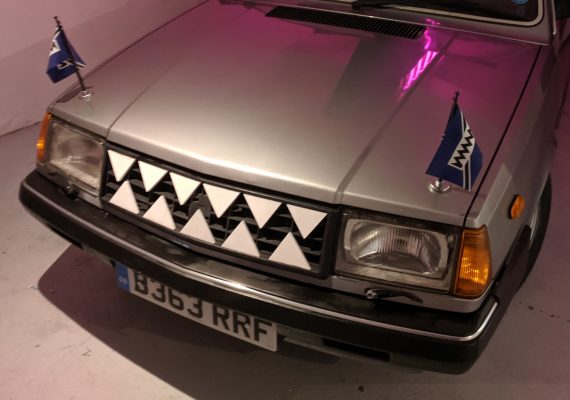 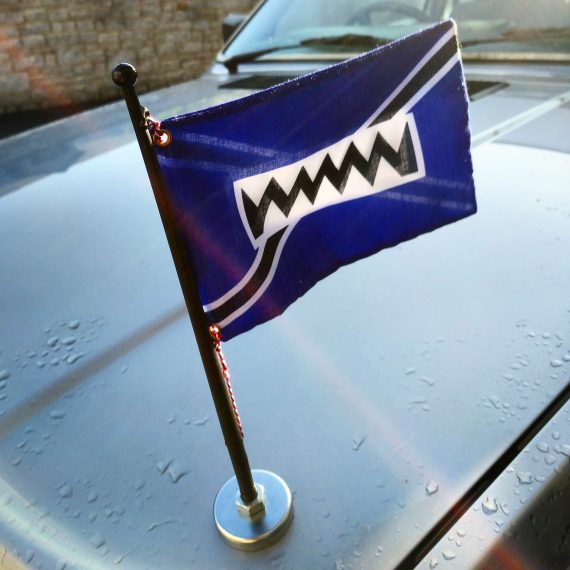 For the arrow to go on the roof I had an idea for how I wanted it to look as well as some practical and legal limitations to size and design. The car needed to be driveable, the arrow securely attached and also couldn’t feature red, green, blue or orange lights (incase someone mistook me for an ambulance or some other official vehicle) 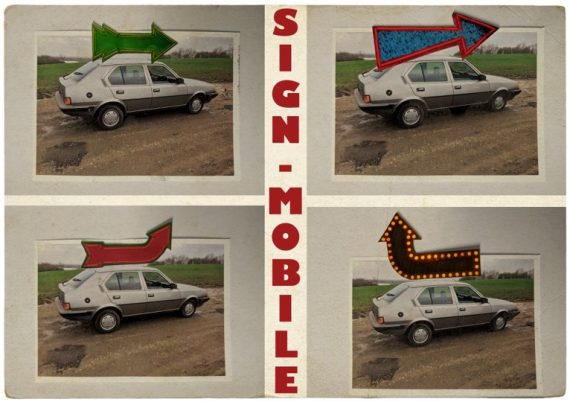 After some early design ideas (such as these early concepts presented in a pecha kucha at Jamboree 2018) I settled on a relatively simple tapered arrow design using the same technique I had used for the Partials series and the combination of pink and aqua inspired by colours found on a research trip to Westward Ho! The design was to be made more complicated by the need for weatherproofing, a harderwearing design and to be double sided.

After tweaking the design and drawing it out digitally I got to do the part that I always enjoy the most, making a physical thing with my hands and tools in the studio.

The design was inspired by neon building signs and the way they are ever luring you into the the relevant establishment with promises of a better and happier life if you buy from there or use the services offered within. The car based arrow would be doing the same thing while driving the journey, pointing to the promise that heading west could offer, the journey seemingly dictated by this pulsating arrow pointing the way forward, the way to happiness and a better life.

An important part of this was to have the lights running on a sequence, bringing an energy and a life to the arrow even when stationary. This was done through an Arduino micro-controller, a relay board and produced a sudden need to learn how to programme an arduino. Despite some setbacks, (especially a last minute one  involving some faulty relays) the programming was complete and along with a large amount of wires the arrow itself was complete and able to be fitted to the Volvo. 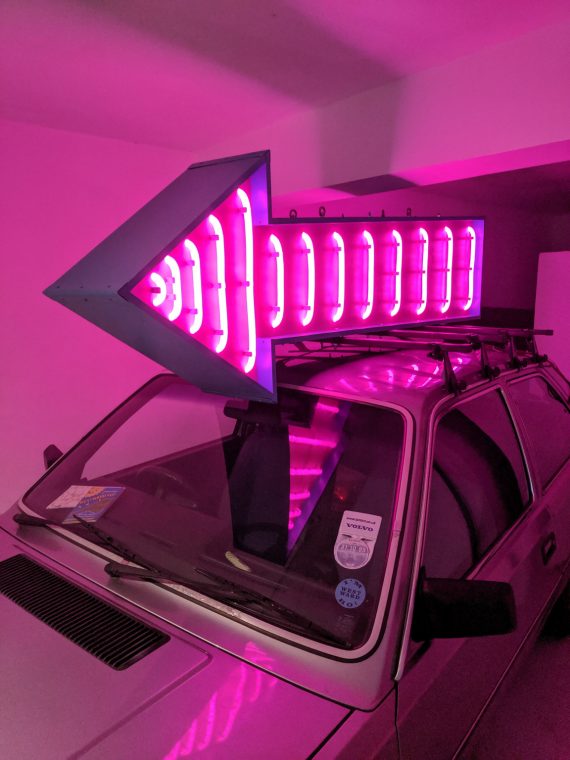 To bring the work together with the souvenir box elements before  setting off on the journey I had set up a mini-residency and launch event at Back Lane West in Redruth. This was also going to be the first place the arrow was to be fitted to the Volvo in its completed state. To ensure security it had a total of 16 fixing points into 4 roof bars – 8 bolts and 8 tie rods through the height of the arrow which also helped hold it together. It was further secured by 4 ratchet straps. I was determined to get to Westward Ho! with the arrow still on the roof.

The exhibition at Back Lane West was the first time I had put all the elements together and included elements of the archive projected and a specially made map work, with the route to be driven picked out in neon style EL wire.  The exhibition was extremely useful in helping me see where the work had come and how the often disparate elements complimented each other making for a cohesive body of work. Designing and making the work was one thing but the main purpose of the work was yet to be realised. The Journey from Northamptonshire to Westward Ho! still needed to take place and I was anxious about it. Not least because I had yet to see how driveable the Volvo would be with a 2.3metre arrow on its roof.

Please read ”I’m Westward Ho!’ – Part 3 for details of the journey itself.

You can also find out more about the project at www.imwestwardho.com