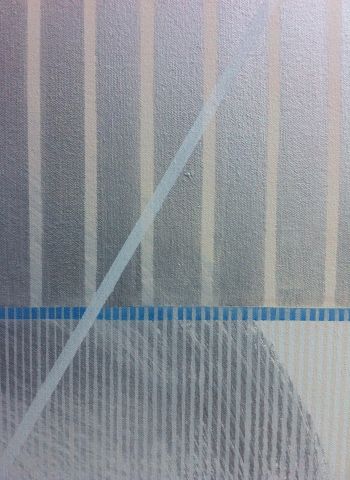 MK Gallery have selected eight graduates/students from their region to participate in Showcase 2012. We have a week each in the project space at the Gallery during August and September. The proposal is to use my time in the space as a mini residency.

‘In Deed’ is the title I have given to this stage of my work.

Somewhere below the surface within In Deed is a repeated two way activity. I commented on Cally Shadbolt’s blog earlier that many possiblilities occur in the studio during the final stages of the degree that can’t be investigated until later. I quickly had the opportunity to do this as I finished the degree and started working straight away towards the MK Showcase 2012. A couple of things I had been drawn to with a similar thread were floating around in my mind and I called them in to play. I have been working on two part paintings for a couple of years and beyond the actual finished works themselves I have been aware of the importance to me of moving between the canvases as a catalyst for the paintings. This movement was also present in the music I was listening to, Django Reinhardt and Stephan Grapelli, with their flow and rhythms. I tend to listen to one music album (usually jazz and never on shuffle) whist working in the studio for a period of time. I find the structure and patterns and improvisations echo in and around the work. A trip to Paris was due in the summer and I had started reading Dicken’s Tale of Two Cities; moving between countries, cities, time and scale. The work I showed in the Project Space I had made in my studio and I travelled daily to MK during the show to work on the canvases between these pieces. an experience I thoroughly enjoyed and found very helpful.

Reflecting on what I had written about the content of my work for the degree, I realise that the work is not merely about the perceptual experiences of walking in cities etc. but that the element of movement is intrinsic to the work.The practice of walking within that particular environment, I now recognise, has been the key to the unlocking the work itself; the city is the place where it happened first. Releasing the movement within the work in other ways is what comes next.

Drawing record. Two pairs of canvases and one single canvas. Each taken into the space prepared with a gestural brush action in silver oil glaze.

Work in progress in the Project Space. Oil glaze over graphite.

Update on installation of In Deed now possible since my computer has been replaced.

I was quite nervous entering the space to show work that had been made during the couple of months following the degree show; work that was was untested and unseen. I wanted to rush home and bring back my familiar and well awarded paintings. But this was exactly the point of the proposal for me, to break through the degree bubble and to begin the practice for real on the other side. I needed to see it, view it and continue to work with it in the Project Space, away from home, studio and university. A threshold week.

‘… the artist’s looking is more practical than reflective, as we will see. The artist looks to the world in such a way as to allow it to move her body rather than describe it. Moreover, art has an advantage over phenomenological description: it immediately puts to the test of vision itself what the artist sets down on canvas. Each painting that succeeds in making us see something directly, that is, without functioning as a symbol that we associate with with the object through a kind of mental act, will have partially unlocked the secret of vision by placing before us some of those things in virtue of which we are moved by the world to see.’*

In the proposal for MK Gallery Showcase 2012, I suggested that the opportunity to be included would provide me with a threshold experience. After a five year part time undergraduate degree course my concern on leaving was the necessity to continue to make work that surprises me, to quickly begin exploring the ideas and questions that present themselves just as the final project is hung for assessment. I want to be in that vital place where the artist knowing much, indeed knows nothing.

So, I shall hang work that is tackling some of these questions, I shall show paintings that I am questioning, and drawings that challenge me. For one week I shall walk the Centre at MK and then stand in a glass walled project space and work on uncompleted canvases.