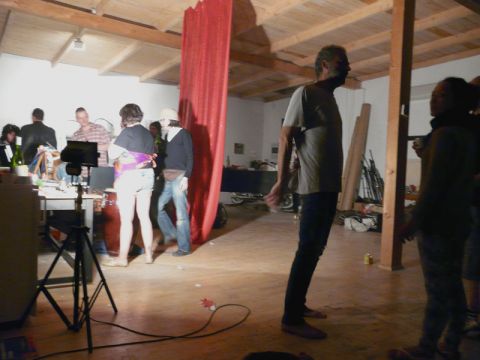 This week, a group of 25 artists, filmmakers and musicians from Islington Mill in Salford have come out to Ibiza for a 2 week residency.

We’ve spent the first few days of this residency exploring some venues and sites across the island where we may be able to work. On Wednesday we visited Festival Club, an abandoned nightclub set high in the hills above the village, Sant Josep. Built in 1969 to accommodate the first wave of package tourism, it remains today as a kind of contemporary ruin, complete with graffiti covered outdoors stages, a crumbling amphitheatre and various wrecked cars and other detritus dumped there since it became derelict only 2 seasons after it was built. From here we moved on to another nightclubbing relic, ‘Pikes Hotel’, famous as a hangout in the 80’s for stars such as Freddie Mercury and George Michael, (Wham’s ‘Club Tropicana’ video was filmed at the venue and there is even a bar named after Freddie). Today it seems like a kind of Disney style parody of 1980’s excess.

A small group of artists on the island have been organising themselves to make better links with artist communities and networks on mainland Europe. Robert Arrato, one of the co-organisers of our residency (who has offered us his huge studio space during our time here) has over the past 4 years co-produced the Ibizart Guide, an annual coffee table style publication showcasing artists working on the island, the book is distributed widely across Europe. According to Robert there are approx 500 artists living on the island (total population of Ibiza is circa 120,000) but out of these only 12 (to his knowledge) have networks and show their work outside of here. He maintains that much of the work being made is quite traditional and believes this may be because the artist community here is not directly exposed to ‘new or challenging’ work, there are no outlets showing contemporary work here.

It seems like there may be many obstacles in the way of creating a better infrastructure for artists working here. One of the first challenges we have had to face as a group is the lack of a convenient meeting place. The café area of a disused hostel had been promised to us as a workspace but for various reasons this still hasn’t materialised. The upshot is that the group has no agreed point to meet at the start or end of each day and tends to either disperse or gather into smaller groups. Reflecting on the question of whether or not a building is important to maintaining a dialogue across an artist community (especially in the post internet age), our situation here has proved revealing. While we have a number of possible workspaces across the island, the importance of an independent space where people can meet to talk about what they have done that day and plan for the following day becomes vitally important. Even though it has been widely reported for some time now that Ibiza has been losing its status as the no.1 clubbing destination (and the mega revenue that goes with it), it seems that space here, even if disused is still at a premium.

Many of us have found that the general response from friends and peers to the notion of an artist residency in Ibiza has been met with outright laughter. It seems that its image as a party island trumps every other possible interpretation of what might be possible here. Who knows, it may well be that these perceptions are the very thing that allows something more creative to develop here, while no one is looking.

Like many of the collaborations we have developed, including our ongoing residency exchange with La Escocesa in Barcelona, this residency has come about through some former Islington Mill tenants who have recently moved to Ibiza.

Taking the people out of the building, we’re hoping to better understand if the ‘spirit’ of the mill is translatable to another context. A former cotton spinning mill on the edges of Manchester city centre, the building now houses an artist-run B&B, independent art school, venue, gallery and 50+ studios occupied by a range of creative practices. Those of us who work there have been inclined to believe that it is the energy and ideas of the people who meet at the building that make it an inspiring place to be and to work. This residency is the first of a number of projects which will test our assumptions, later this year we will swap venues with Flux Factory in New York for a 1 month exchange.

Ibiza has a long history of people dropping out and escaping to the sun in various waves since the 1960’s and 70’s and has become home to ‘opt outs’ of all generations, it is this which gives it a spirit this isn’t represented by the vomit drenched image of ‘Ibiza Uncovered’ etc. We hope to go out and discover some of the deeper history and energy of the island and work with the people we meet to create a programme of events, make new work and in doing this explore what Islington Mill and its approach to doing things may have to offer in a totally different place.