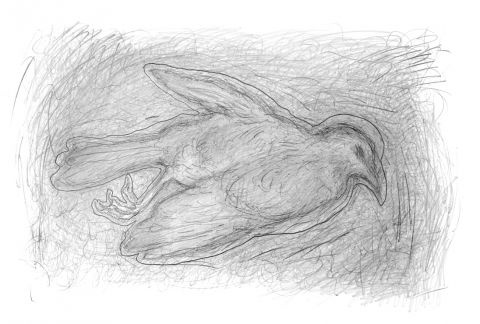 ‘It’ is ever-present. It does things whilst he watches and reflects. It visits places where he feels uncomfortable, a bull in what seems to be the fragile china shop of the mind. The bull has a habit of trampling on things that are as yet incomplete as well as causing further damage to pieces of this and that that clutter the floor, already hurt, underlining the point. It reveals weakness, threatens ridicule.

A different kind of day. He began with the intention of painting, but mind and muscles were reluctant. He was going to paint an outline image of a bird. Each time he put brush to surface, the result was clumsy. “Draw then,” It suggested, “Loosen up.” The line idea lasted a few seconds until the drawing took on a life of its own. He liked the first marks and followed them. The conversation played out between mind eye and mark is physically satisfying, a way of acting out, using an ‘H’pencil. The lead offered resistance which had to be overcome in action. The dark outline with a 5B pencil was to an extent an admission of defeat. His ‘artist’ needed a little more contrast. Crime Scene popped into His mind. ﻿

He got into a little difficulty recently. “What about?” It asked. He has this thing about taste, which exercises his brain like an itch. It was about intuition. How does an artist know when something is finished, or what to do next? “Not that again, you do go on a bit!” It accused. “That’s the sort of question that people ask who have no real understanding of the way artists work.” It continued. It’s right, and the response of those with whom He was engaged in conversation was of a degree of shock that the notion of intuitive judgement should be so agnostically questioned, or at least as He put it distrusted.

“An intuitive act is not a matter of your choice. It chooses you. You fall into it. You give yourself to it or not.” “But is an intuitive act still not a matter of taste?” He asked defensively. “Yes” It replied, “And taste can be a pretty crass thing.” “Taste is everywhere the same in principle and everywhere individual in practice.” I sit to one side and watch as the circles continue to turn. He decided following the conversation to paint as far as possible ‘intuitively’, just as He always does really but to stop worrying about it. This painting had been wandering around in circles. He looked at it, imagined things and painted. He did something and then decided to do something else, adding or removing as he went. If something appealed, he went with it. He had to make assumptions, such as what looked nice or otherwise, but were those intuitive as well? Meandering lines are nice. Colours meeting are nice. Contrasts are nice. Semi transparency is nice. Thick paint is nice. “Are some better than others?” It asked, “How do you know when to stop?” “Be quiet!” was his response. 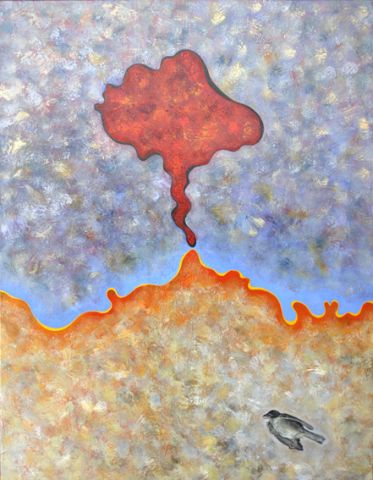 “So what has all this achieved?” It demands. “That last painting – is it your last painting? It was something of a mess, wasn’t it?” He had to agree. He had pressed on with it in despite misgivings. The one piece of painting that He enjoyed was the descriptive piece. As He painted the legs, they actually stood out from the bird- it pleased Him, made Him smile. It was worth the mess to get to that. A lot of the doodling is half-buried now. “You just won’t admit that all you really want is to paint and draw pictures of things, will you?” What a question! He does feel that there ought to be more to what He is doing than that; He wants there to be more to it than that. Otherwise, what is it? Just copying things? How can all this blogging and being on a-n be justified if there is no real purpose to it all? Some dead birds, a bit of composition, a touch of the mysterious, and appearing a little odd, is that what it is, for this identity thing, a portrait of identity where there is none. It pokes fun. “Maybe it’s a proposal!! Painting as Proposal for the absent Self?”

The need to paint is a physical thing that hangs around the nerve endings.. He always wanted to be an ‘artist’. He learned the physicality of painting from ‘Archie’ Campbell, his teacher at school. Archie showed slides of his work, smelled of turpentine, painted in a lovely physical way, no ‘filling in’, no neatness: the way Archie applied paint was formative for ‘Him’. And Lawrence Self, at Art School, whose paintings made His fingers itch to paint, and His mouth water.

A life lived contentedly with itchy fingers and mouth-watering paint ought to suffice and be immensely rewarding. But there are other motivations, love of praise, desire for recognition, status, all the selfish longings, the wish to be bigger, in a bigger world. He is no doubt, (or hopefully?) not alone in living a life that almost wilfully avoids the truth, misses the point. Misplaced modesty too plays its part in mis-shaping ambition. This painting is a kind of doodle on a canvas that went nowhere. It is a scattering of things from His pockets, stuff that He carries around and forgets, a counting of change whilst waiting for the bus. ‘It’ pokes at the sore, “You’re not really an artist. You just want to be seen as one, to have an identity. It’s a romantic idea. You don’t know who you are.” He knows all this. ‘It’ is not telling Him anything that He has not suspected. But His salvation might still lay with the paint. 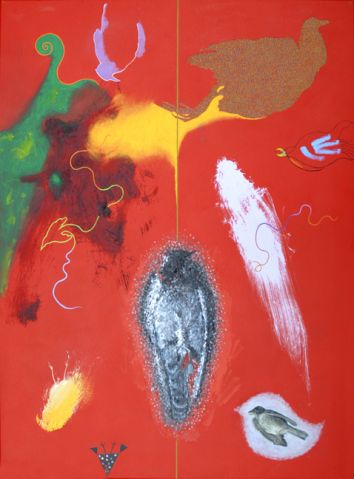 “Does He believe all that stuff?” He enjoys it. That may be the worst of it.

He lives daily with a degree of anxiety. Writing is an uneven pleasure. He doesn’t want to be a smartarse, but that is how He looks to Himself sometimes. He’s at his most vulnerable when He is pleased with something. That’s when ‘It’ enters with doubt and discouragement. “Why do you write this stuff in public?” It asks. “Does it not look pathetic?” “It’s a kind of mirror,” He replies, ” He makes the image before looking into it.” “Crazy!” ‘It’ responds. “More repetition – mirror, mirror on the wall. Hoping to be the fairest?” Here is something of a quiet insanity of a man looking into a mirror only to see the back of his own head, (Magritte’La Reproduction Interdite’) about it all. The image is a straitjacket for the man.

Parmigianino’s Pigeon. He loves the sound and rhythm of ‘Parmigianino’. The ‘Madonna of the Long Neck’, he has always found to be an amusing title. The alliterative thought of ‘Parmiaganino’s Pigeon’ made Him smile. This little series involving titles continues tentatively. “But don’t change the subject, why in public?” ‘It’ insists. “The man has no choice but to keep looking for a face that he will never see.” “His anxiety involves a fear of being found out, of the finger pointing at His vanity, of a ridiculous face. Going public is a double bluff.” “As if it mattered to anybody else!” ‘It’ countered. 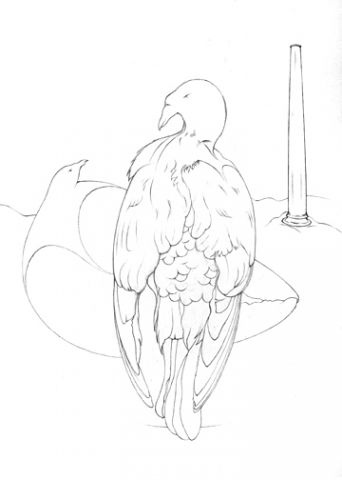