In a conversation with an artist friend over the weekend, we spoke about the importance of creating space between collaborative partners – allowing time for reflective thinking on both sides. I’ve had that, this past week or so, and there’s no doubt that time and space for reflection is useful.

Henrietta and I will be meeting again on November 18th to look at how best to put together pieces of footage that have been filmed so far. Time for reflective thinking has reminded me that the final film version is still very much open ended: nothing at this point is set in stone, the creative process still very much alive and flexible.

And obvious though it sounds, the final version will be determined by what footage we manage to get  – within certain time frames and other constraints – like, for example, the noise from massive building work outside the studio on the day we did the filming. There are already a number of sound issues to get around, because when I borrowed my friend’s studio, I hadn’t anticipated external noise having such an impact on our recording.

I’m glad in this respect of my own and Henri’s ability to be flexible; making compromises within any film making process must surely come with the territory. It’s highly likely that there will need to be a fair bit of juggling around in this particular case  – all part of the grand learning curve that this collaboration is teaching me.

Meantime, I’m continuing to focus on the beauty of the music boxes – their interiors and mirrors, in particular and of course, the appealing, pretty features of the tiny plastic ballerinas – unique in their appearances and becoming so familiar to us now, that Henri and I have adopted names for some of them – Chalet girl, Diana Dors, Sandy Shaw among them.

Here’s another great photo taken by John (McCormick) of the buxom blonde, aka Diana Dors. 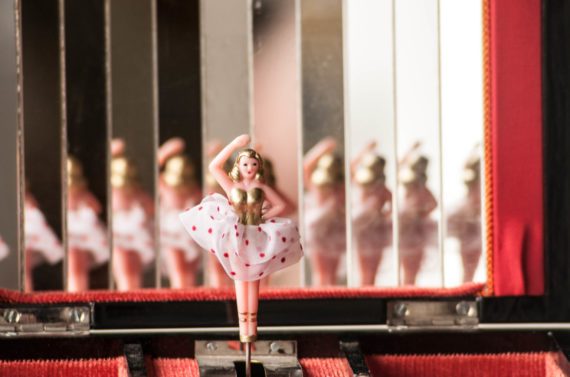