After few months of editing my previously collected material I am back on my journey recording four new locations to complete the 12 hours sound clock of “Krakow to Venice” project.

The first location to visit after the break is Ostrava in Moravian-Silesian part of the Czech Republic it is a city only 50 km from Polish border. We arrive in the third largest city of the Czech Republic on Friday afternoon which gave me enough time to have a quick look around the city centre for recording sites for the 11-12 am hour. Although the population of Ostrava is over 300 000, the town centre was very quite during our two day stay.

Ostrava covers over 214 km2 and is divided to several districts.

On the site of the old city centre is the industrial Vitkovice – district established in 1828 after the discovery of large layers of black coal. With the birth of industrial Vitkovice , the city developed rapidly, several coalmines and steel works were built. The steel works originally belonged to Viennese Salomon Mayer von Rothschild with direct connection to Vienna by Kaiseer-Ferdinands Nordbahn in 1847 which gave Ostrava the industrial boost.

After the World War II the steel works were privatised as VZKG by the Czechoslovak state as was the the rest of the industry in Eastern Europe.

The industry in Ostrave slowly declined after the 1989 Velvet revolution when major changes took place in the structure of the state and as a result the coal mining in Ostrava was stopped in 1994 and the steelworks of Vitkovice were finally closed in1998. The only plant which continues production is Arcelor Mittal (Nova Hut in it’s communist past)

Unfortunately Ostrava remains the most polluted city in EU with the highest concentration of PM10 dust. In Vitcovice there is a museum of mining but unfortunately we ran out of time to see it on this visit. 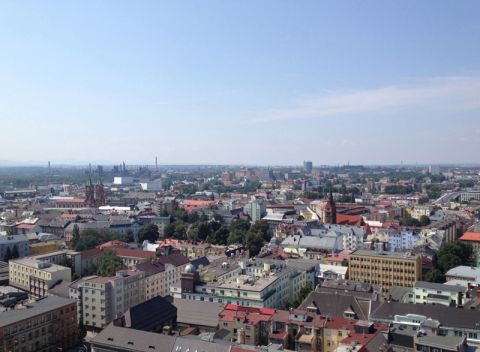