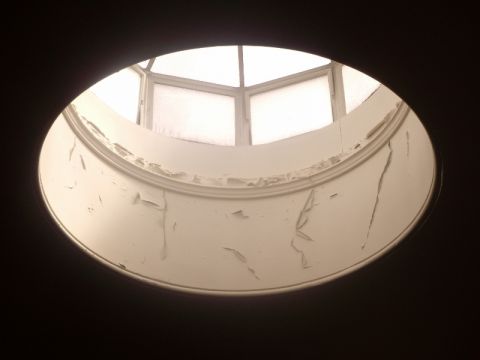 It could fizzle out before it gets going, blow up in our faces or explode and set the town on fire – a step by step record of a project unfolding.

Well, it’s taken a couple of days to let the dust settle, before I could face writing this blog entry. Monday evening there was a full council meeting which Laurence and I bent over backwards to get to. We had sent some e-mails of support at the last minute and a brief summary of the proposal closely tied into the council’s vision. Once seated we discovered that it was no longer on the agenda and after a whispered carfuffle with the deputy clerk we discovered the decision had been made in a private meeting earlier in the day with the political representatives. Despite being invited by the Council to put this proposal together with the full intention of drawing people into this central city council building, the political representatives decided if they are to provide rooms free as in kind support for the project ‘it may set a precedent to other organisations and therefore they could not agree to support it’.

As you can imagine we were less than happy, from not having the opportunity to defend our case, from not having been given the full information on the developments in policy in regard to the buildings, (as we discovered later) and for not being informed about the meeting etc. In fact rather a lot of things. And so today, I’m licking my wounds and emailing everyone involved. Laurence and I will meet next week over coffee with the curator to discuss what we can salvage from all this work but as the project was so closely woven into the fabric of the building, I’m not sure how that will progress. In response to the councils email the following day I constructed a factual, but in retrospect, rather strong email back. I forwarded it to Laurence for her opinion but in the end sent it off just as an email came from Laurence advising we should tread more carefully. Oh dear, it doesn’t look like I’ll have many friends at the council in future!

Now I really am beginning to doubt this project really will get off the ground without new input somehow. Communications with the Council officer who first invited us to put the proposal together have, in recent months become much more infrequent and although they have been particularly busy with moving premises etc I feel there are other factors that have come to play.

The proposal, however , has now been forwarded to the deputy clerk who will in turn take it to the services committee of the Council for their decision at the start of July. Something about the tone of the e-mail however would suggest the proposal is not being given the attention I feel deserves. I voiced my concerns with the curator involved, and she, who carries a lot more clout in this area, has offered to take over communications and add her weight more overtly to the relationship.

At this stage, there is little more I can do, other than stand back and let what will be will be. Salisbury is an extremely traditional city, geographically it feels quite isolated from more significant players in contemporary art, with, in some ways a wealth of culture, it can be quite insular, resting on the weight of its own history. Certain individuals and organisations are working to change this but whether the City Council are willing to take that step into unknown territory remains to be seen. If not I think they will have missed a real opportunity to generate more energy around contemporary art in Salisbury, drawing people in and raising its profile as a potential venue for further projects such as this, – and me, yes I suppose I will have invested a lot of time into a project which will never be realised in its entirety however contacts and relationships I have made and strengthened, the direction in my work influenced by the venue itself and the experience of putting together this proposal is never wasted time but can only be of value.

Things are moving on slowly, no closed doors as yet so far. Tentative contact has been made with the artists whose work we feel will take the show where we want it to go. The proposal has been passed on to the next stage with the Council and it feels like wheels are begining to turn. Time to wrestle with the arts Council grant forms again. still just under a month until the whole City Council makes its final decision as to whether the project ticks their boxes enough to justify their investment in this climate.

Finally got in to see the potential space for the exhibition. Dating back to the 1700’s it is steeped in history with various ancient officials looking down from gold framed portraits above the exhibition floor. Discussing with the curator, it looks like we need to get totally back to the drawing board as far as the work we want to show and the artists who will be involved are, in light of the space and it’s inhabitants.

A quick update on the situation with the Salisbury project. The proposal was finished and handed in to both the Salisbury city Council contact and the head of arts for Wiltshire Council. As proposals go I think it was a whopper and to term a phrase that we are all thoroughly fed up with, it ticked every box going and even some that hadn’t yet been invented. And then – silence. Not an e-mail not a phone call, not a tweet, as it were, out of them. Admittedly the city Council did move from one building to another during this time but after numerous rebuffed phone calls it came to the point where stronger action was called for. During this month Laurence and I had also met with the Salisbury arts centre assistant director who was immediately on board with the idea and offered whatever in kind help they could in the way of space and equipment. As we now had a trail of people involved I gave the city Council a final date to respond by otherwise we would have to assume the project was off. Within 10 min I got a really is positive response with apologies for not contacting sooner due to the move, workload etc etc and all of a sudden everything was back on. As the situation stands now we have a site visit arranged for 16th of May with a council worker, Laurence and I, the curator involved and the technician who will ultimately help to install the show. So far so good.