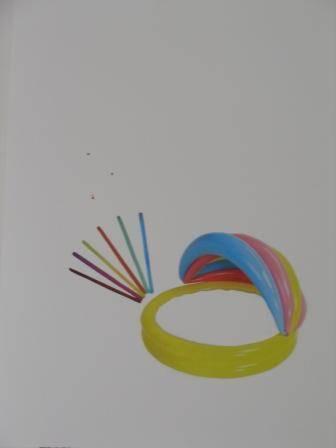 I am about to start a 4 week residency at the Limbo/Substation space in Margate starting from the 25th June. I make sculpture and am aiming to use this residency to develop more of an installation based approach. I am also very interested in using the location of Margate and the people as the catalyst for my progress.

Yesterday I spent the day in Ramsgate, I had chips, seafood and an ice cream it was great, something about the place just made me want to eat seaside food. There were lots of charity shops and poundshops so I bought some glowsticks from a poundshop and bought some plastic beads from a charity shop for the swing piece. Ramsgate doesn't really feel like it's in England you feel a little like you're abroad and there seem to be ridiculously low-flying planes, I suppose because of Kent international airport.

I brought 20 metres of gold chain on Monday and today I attached the gold chains to the beachball piece, I also decided that I'm going to add some plastic fake gems. My partner said that it looked a little like a raining cloud which I quite liked the idea of. With the glowsticks I made a hanging pendant style piece, it looks a little like a mini neon piece, except the glowsticks will fade- an element I like. I also started a new collage with the packaging from the paddling pool and the glowsticks. I really need some mirror for the rollercoaster corner!

Opening day!! The lights were fixed, my inflatable should stay inflated and even the sun popped out for a bit (they say bad luck happens in three's). After all that stress everything seems to be going fine. I feel pretty bummed out that I didn't manage to find any mirror for the rollercoaster corner, I could of just used anything but it wouldn't really have felt right so maybe it's better that it's left as it is, it looks pretty good on its own anyway.

So as of saturday I'm just invigilating the space, it's kind of sad that I'm moving back in to my studio and leaving this massive space. It's been good to experiment and really push myself and I feel that my practice has really developed. This experience has really made me realise how much my surroundings effect the type of work I make, I hope that the work I produced during this residency shows how much I really do love Margate and hopefully the people from Margate that visited the space approved of my work.

O.k. so I thought the dafated inflatable was a disaster until the lights in the space decided to stop working! I have to wait until friday morning (day of the openening!) until someone can come and check them out. This means if they're broken and can't be repaired that day- no lighting for the opening. I feel a bit like someone up there doesn't like me very much or I am paying the price for all those snails, ants and flies I've killed over the years!

So my moral is at an all time low, I suppose you expect things to go wrong but this really is not what I was expecting. On a lighter note, the suns shining (even though the weather forecast said it's going to piss it down on friday) and I've had lots of visitors and lots of good response. I'll be sad to move out of the space and sad that the residency will be over but it will be nice to not be stressed out and panicking all the time. I've decided that if it all goes to shit and the lights don't work, and it rains and the inflatable deflates, I'm just going to get really drunk.

Today a bit of a disaster happened…the inflatable clam type thing has a hole, I opened the space today to find a shrivelled up thing looking not fat and bright but shrivelled and pathetic. With a bit of tape I managed to momentarily resurect it but I have some serious surgery to perform- the bloody opening's in 3 days time…aarrgghh!

On a lighter note even though the opening is fast approaching (I think I'm in denial) I decided to finish 'Brave new world' by Aldous Huxley- scary stuff, especially the 'ending's better than mending', for the 30s that guy was a real visionary. It's weird how it rings so true to today's society. Gagging for more I also read 'Animal Farm' by George Orwell, I hated man-kind for about 20 minutes.

So other than reading scary ideas of the future I also managed to buy some beer for the opening, I hope more than 20 people show up otherwise I think I will probably be very drunk.

The space is really starting to come together. Saturday it was a really lush, sunny day (the beach was v. busy). I bought the guardian newspaper as they were running a seaside guide and I thought it fun to see if Margate got a mention…and it did! The shell grotto got a mention as did Walpole bay and the Lido at Cliftonville and they even mentioned the proposed Turner Contemporary building.

There's been a bit of a jazz festival down at the harbour so I've been hearing the sounds of jazz drifting up to the substation. Yesterday after I shut the space I went down to have a look, it was really special, lots of people and a really great atmosphere. They had put up some coloured flags and stalls and a stage, it looked really good.

I painted the skirting in the space (I thought it needed a little spruce) and hung the collages. I'm pretty happy with them, I like that they're made from the leftovers of the packaging from the beachballs, inflatable and glowsticks. There is something tremendously fulfilling about finding a use for something that was going to be thrown away.

I even managed to name all the pieces! It was pretty tough going, so now I've really got to make a kind of floor-plan for the show. I'm getting really nervous about the opening, I really hope people turn-up otherwise I'll feel like a right plum.