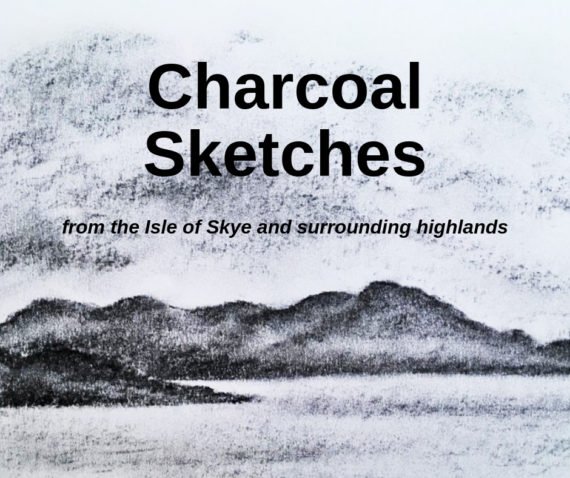 I’ve been dreaming of doing this for years, and last Sunday I finally got round to it – doing a series of charcoal sketches from the roads and lovely scenic spots around Skye. I watched Brené Brown’s new talk on Netflix ‘The Call to Courage’, choose ‘courage over comfort’ and got myself out with the sketchbook.

You see, I don’t have a problem particularly with people seeing or watching me draw/paint, it was the fact that this tiny idea of a potentially enormous project would actually start when I made it. It would mean that I had committed to potentially sketching from every layby and every sight on this island, other islands and the rest of the Highlands (not unusually, my sights and ideas have escalated exponentially since I first had the inkling). That’s huge by anyone’s standards isn’t it? So, I took a took a starting step and went to nearby Dunvegan Castle to begin – here before (well, at the top of the page a you are the first two sketches of the series that has been dwelling in my head for quite some time.

The weather was clement (although distinctively breezy on the Lochside, unsurprisingly), the midges hadn’t hatched and it was lovely to at least begin something that had been brewing for so long. Like any release of energy, lots of new ideas also seeped in: there are lots of beautiful tulips and rhododendrons currently in bloom that swept through my unsuspecting imagination. So my brain leapt from monochrome to vivid colours – typical! Maybe next spring for those, but it was so fabulous to be out and about doing what I love most.

(Both sketches are in charcoal)