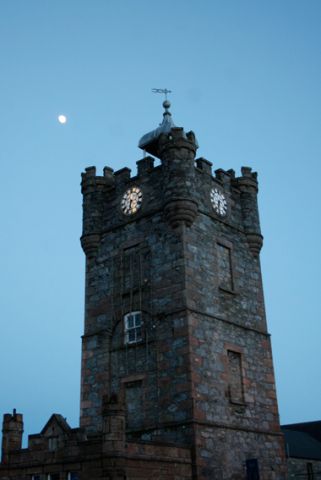 A blog to accompany a project in Dufftown, Banffshire by visual artist Janie Nicoll, in collaboration with poet Ken Cockburn and the children of Mortlach Primary School.

Back in Glasgow after a long Friday evening train journey, stuck sitting next to some rowdie drunken nurses from Aberdeen. I met John Binnie at the train station, the writer who I have worked with on a couple of projects, but unfortunately couldn’t get a seat with him. Managed to have half a conversation where we discussed our shared interest in working with ‘the community’. We recently worked on a project together for the ‘Aye Write’ festival with recovering alcoholics from AIS, GEAPP, and Milestone in the East of Glasgow, and we both found it very rewarding. The project culminated in performances at the Mitchell library, and at Platform Theatre Space, Easterhouse. John has a knack for getting people to write about things they might not normally talk about, so the works the group produced were gritty, universal and deeply moving.

Yesterday I met up with Liz Rowe, Ellie Harrison and the http://extraspecialpeople.org group from Eastside Projects, Birmingham www.eastsideprojects.org who had been having a whistle-stop two day tour of the Glasgow Artscene. They came to my studio at the Briggait, and there were about 18 of them so they filled the studio! I also talked to them about the Scottish Artists Union www.sau.org.uk, as I am on the executive.

I met them later on in the evening at the Intermedia Gallery opening of Sarah Forrester, and they were all starting to look a bit exhausted… apparently they had walked everywhere, and not used any public transport!

It was good to hook up with Liz Rowe again as I have known her for a few years. We met at the Shining Cliff Residency, in Ambergate, near Nottingham, hosted by My House Projects. We have kept in touch and i showed Liz’s works in both of my Hallelujah exhibitions, (http://smallthingsthatmakeupabigthing.blogspot.com…)

I had some interesting conversations with artists Ruth Claxton, and Nathaniel Pitt an artist who I previously met at the “Winner Takes It All” conference, Liverpool Biennial 08. Inevitably we ended up talking about artists survival strategies and ways of operating, ‘How to survive in this business’ seems to be a recurring topic.

So it’s Day 2 of the project and I’ve had a hectic couple of days in Mortlach Primary School. Ken Cockburn (the poet) and I launched the project by giving presentations to the Infant School and then the Upper School, and then we worked with different classes over the two days. I managed to squeeze in a visit to the Tourist Office where we will be sighting one of the works, with the P5’s; and then a visit to the Hospital/Doctor’s surgery with the P1’s who are a very lively bunch to say the least. There are 19 boys and only 4 girls which seems to create chaos no matter what they are doing. All in all its a nice school with friendly, helpful staff and its all going well.

This evening I went with Mary Bourne to Deveron Art’s Empty Shop (www.deveron-arts.com) where a talk was given by Georg Deutsch, at lecturer from Oxford University on West African History in conjunction with the artist residency by photographer Baudouin Mouanda from Congo- Brazzaville. Apparently Baudouin had to leave a few days ago prematurely, due to problems renewing his visa. Glasgow based Artist Anthony Shrag will be in residence there next month.

We drove back to Dufftown through snow covered hills and fields, illuminated by a huge silver moon, and with Orion shining brightly. Its very, very quiet in Dufftown at night-time, remarkably quiet.

I am getting organised to head North tomorrow, to start the project on Wednesday morning at Mortlach Primary School in Dufftown. Dufftown is in a very rural location and pretty high up so the weather can be quite severe. It’s a four hour train journey via Aberdeen and Huntly so the tricky part seems to be getting there. The materials have been ordered and hopefully will be delivered before Wednesday, along with a ‘3 in one’ printer. Then its time to launch the project and meet the children and staff. We had a meeting a month ago to plan the project, so this will be the third time I have been there. The poet Ken Cockburn had his first sessions with the kids last week, and I am wondering how he got on. The plan had been to take the children out on some of the ‘Walks’ but i think the weather was pretty bad, there was snow and various roads closed so I’m not sure if they would have stuck to the plan. I suppose the point here is to remain flexible.

My role is to work with the school children to create artworks for the library, the tourist information office and the doctors surgery and a map/poster, and to work collaboratively with Ken to produce Story Walk leaflets. I’ll be working with all the children in the school, so that’s 150!

Last time I was there we did some of the walks with artist/sculptor Mary Bourne, who is coordinating the project. I took a lot of photographs as it was a fine day, and there’s lots of beautiful scenery, ancient woodlands and interesting stories about the area. I’m looking forward to going over things with the children and getting things from their perspective.