1-1 with Jane 11/12/20, we discussed the way I wanted to to experiment more with placement projection and see how the setting adapted the portrayal of the film. See initial notes below: 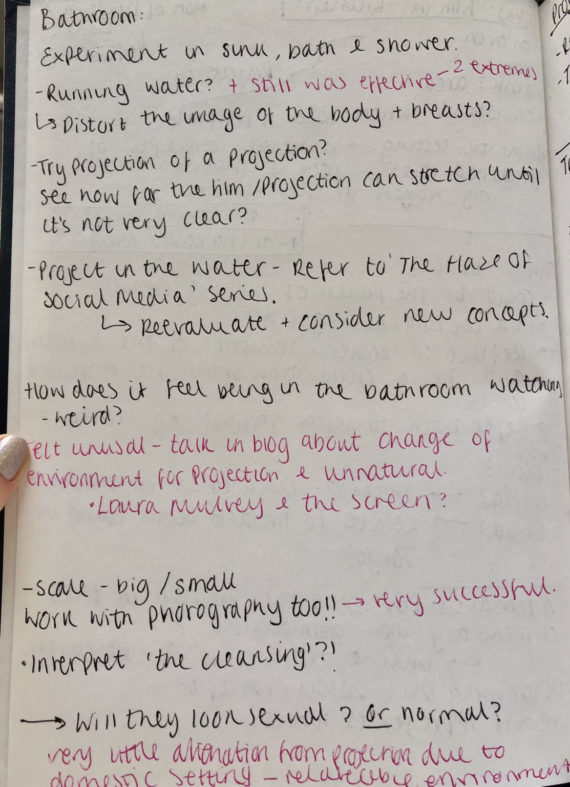 We spoke of different environments to place the projections in. Lockdown and Light – a project created by Jane my tutor during lockdown to engage with artists through social media. Below are examples that caught my attention by Sara Heywood, these films encouraged me to experiment.

After seeing Heywood’s projections I wanted to experiment. I used the shower, the sink and the bath. NOTE: I didn’t want to think of any theories/concepts while I experimented. I wanted to focus on the exploration of material and setting and how it could be perceived and interpreted. – This was very beneficial.

Water has been active in my work within The Haze of Social Media series, it worked very well when trying to explore distortion and illusion. I wanted to return to this perception to see what it could add to my projections. See above, in Only Touch With CLEAN Hands projection in shower. There was something intimate and voyeuristic about this presentation as the bathroom is a place where you wash and cleanse yourself, nude – it adds to this visual that you shouldn’t be looking – this was also a comment made from my group crit 20/11/20. Peers felt mesmerised by Only Touch With CLEAN Hands and as though they were waiting for something else to happen. Hand sanitiser = only touch a women with clean hands, shower accentuate this.

Does the use of cinematic screen in an unusual and intimate place, such as the bathroom, convey more possible sexual objectification towards women like Mulvey explores?

Reflection 15/01/21: Recently I have learnt that within films  especially Reese Witherspoon’s films and views, pools and water are used to sexualised women e.g. Elle Woods in Legally Blonde is sprawled out in a bikini in an inflatable suggests it feeds the male gaze. There’s these expectations that come with this social place as “the pool is a pressure cooker of social expectations for women: to diet, shop, shave, tweezer, sculpt and tone” (Hess, 2019), it’s interesting to see in these works that the use of water does everything but explore these issues cinema does. Does it challenge these expectations.

Reviewing this, Psycho comes to mind, the aggressive gripping of the breasts reflects the famous scene of the male watching the women in the shower intensely before he kills her, the darkness surrounding the projection and the voyeurism, becomes sinister. Would a slowed down film like Douglas Gordons 24 hour Psycho appear more disturbing? I moved to the bath to experiment with running water/ripples to give the films a realistic identity, they brought the dropping to life. My Verblist – making the ‘to drop’ more impactful as the dropping breasts are confused with the splashes of water.

There was a hair left on the shower wall, it was sitting on the nipple of the projected breast. It gives the imagery of normalisation that women have hair on their body, it almost challenges the stereotypical women where we are all seen to be shaven to begin to be ‘idealised’. 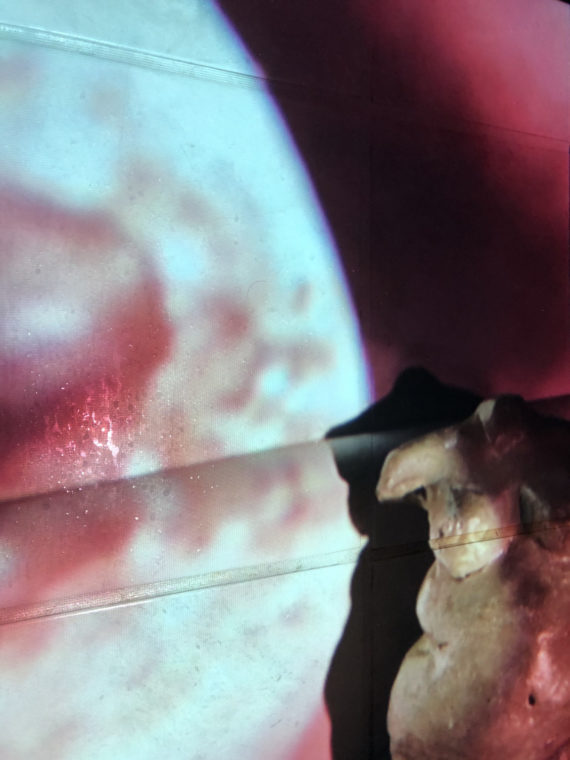 See still below, Just a Ripple, the use of water added natural manipulation which I enjoyed this when I used water orbs within The Haze of Social Media, I liked that the image wasn’t edited but the perception of the camera was. The ripples from the water exaggerates the imagery of the sculpture, suggesting a more realistic image of women – reminds me of Jenny Saville, embracing the natural form. 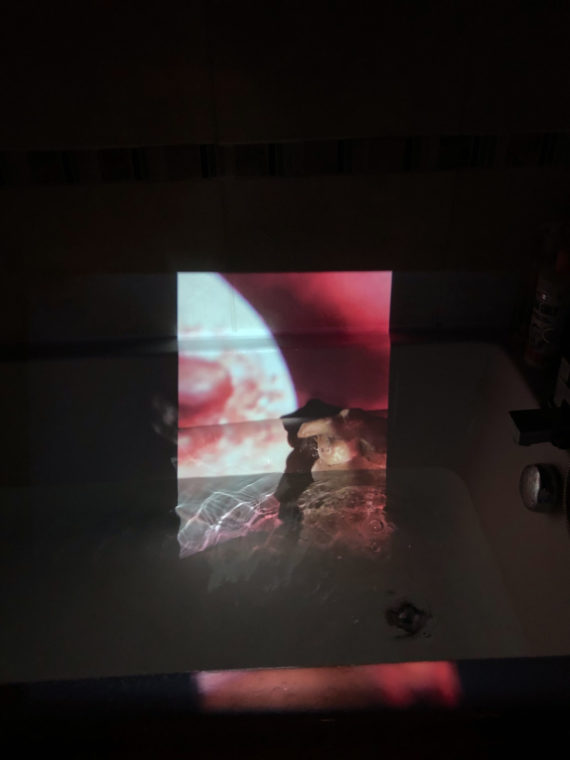 It’s as though the colour pink from the image has leaked into the bath when creating the reflection. It also dispersed this pink tint of the shadows of the bathroom, see still below.

Reflection 28/01/21: I used the leak of colour in Are You Watching? across the breast sculptures and the environment as way to create a tunnel vision for the audience.

Reflection 29/02/21: I also used this explosion of pink for my Lockdown and Light 2021 submission. I used the projection & water ripples to emphasise the body and the portrayal of women in the cinema, the glamorisation of the figure.

See below, in Where is the Breast?, this photograph was when I was focused on the shadow of sculptures. They appeared like sweets – a comment Susan had made. The image below reminded me of ‘Where is Wally’, I placed a clay breast in the water to play with this illusion of what is real and what isn’t which I really liked.

Reflection 19/03/21: ‘sweets’ a comment that appears in a lot of my feedback – women as desirable edibles. I chose to continue this feedback throughout my current practice of To Bite and Sweet Tooth B&W currently in relation to seduction of the female form through the male gaze. 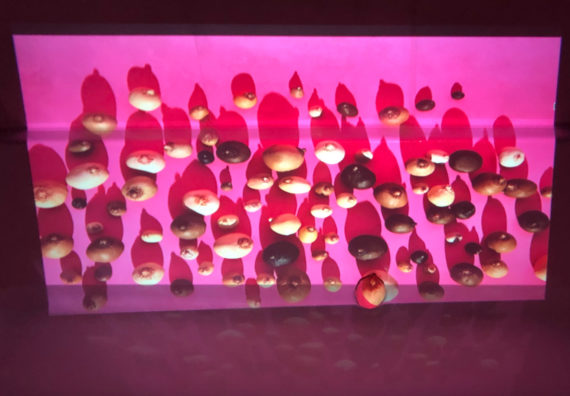 Reflection 19/03/21: Image below feel editorial/bright bold like a set up for magazine, does this effect the way the images are then seen? Use of body etc.

I used the sink as the projection immediately gave the idea that there are more breasts present than the 5 sculptures placed in the sink. Relate to CUBED. The image above looks like busy wallpaper and the imagery that something is growing around the sink – weird? It dominates the space.

NOTE: Should I project in the kitchen to see how this domination would come across differently with it being in a gender specific domestic setting, to involve myself in the projections, similar to Heywood. To try projecting in the kitchen – different surfaces e.g. oven, worktop, hob etc. May encourage ideas of gendered roles in the kitchen/the ‘idealised’ housewife?

Reflection 20/02/21: This is the image I chose to use for the Congruous exhibition because I loved the way it covered the kitchen space. I followed through with these thoughts and it worked even better in the kitchen – better relationship to sculpture, space and meaning of domestic roles & objectification. Projected on the wall almost displays the breasts to be viewed.