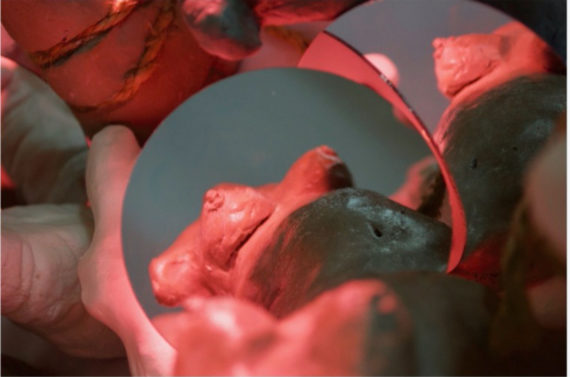 From 31/03/21 I have used Sweet Box to project Sweet Tooth B&W into for my exhibition proposal experimentation. I used a verity of angles and close up to get a feel for the maquette space as well as an installation itself. See the stills below from this session, I used the cellophane at this perspective to curve around the mouth, almost bringing the film out of the screen and into the space. – These images have a very similar appearance to the original projections in my studio which I am glad because I have been quite successful with the box becoming a space.

Reflection 02/04/21: In these images, the box feels large when the images are taken from inside, it’s like how I envision Kasuma’s installations, there actually really small rooms but the use of mirrors make them feel infinitive. This somehow seems to work for Sweet Box too, black = can’t see where the walls start/end and the large projection inside makes it feel larger than it is.

I wanted to incorporate this idea of censorship of images within this exhibition maquette – where an image online shares a warning message/almost covered up but you can still see parts of the image. This was a point brought up from my group crit 24/03/21 and an issue I discussed in my dissertation. I continued to channel his through the placement of the cellophane but using it as a suggestion. This plays with your curiosity as a viewer, feeling almost drawn to see what’s underneath. It seems with the Hollywood cinema they do this with the female form by playing to the eyes of the male gaze, showing almost everything of a women in a manner which glorifies and normalises this sexualisation. It impacts the female gazes’ self gaze with the way we think we should see ourselves. I feel with this visual of projection in a setting such as the cinema which both genders attend to watch movies, it involves everyone and doesn’t target men or women in particular. – This was a point Jane said to make aware. This piece is most effective virtually, where as if this exhibition was in a space, it may be better in the real. It must be both male and female viewers for the justification of the art work to be received otherwise I don’t think there will ever be a change.

See films below. I placed the camera down and tilted it up to the screen, to begin with I didn’t mean to cut off some of the picture but I think it really played well where you can still see the film/what it is but also the space. – It has this appearance of trying not to look but you can’t help but look.

There does feel like so much aggression in this series, from the physicality of chewing the breast, to the screwed up cellophane that’s draped across the mouth. The darkness accentuates the harshness of what is happening in the actual film. I’m surprised I’d like working with monotone colours as previously it’s been about the brightest I can get the images/projection. It’s an interesting contrast to almost seriousness.

The use of no sound definitely works well and especially being projected in a space like this, plays up to the horror movie aspect which was previously mentioned in my group crit 24/03/21. The black walls adds to the emotion/eery-ness of the space. I also then played to that with the editing of the actual film making it the imagery of the breast being eaten/un-eaten on a continual repeat – this makes it feels dramatic in the sense you can’t take your eyes off incase it changes. This reminded me of Bruce Nauman’s Poke in the eye/ear/nose where he would leave it playing continuously and people would fail to see where the start/end point is. With Sweet Tooth Cinema Box View Point 3 I decided that there isn’t one. (I forgot to film this one landscape!)

I really enjoy this off centred view point, it is as though there’s different seats within the cinema and each viewer is getting a different perspective. The projection also cancels out all tone/shade and instead portrays the breast as an object/toy. With censorship comes this connection to pornography and the censored images/acts. The sexual objectification in pornography must be acknowledged especially here, reminding of old fashioned adult cinemas – adult movies “did play along a couple of social movements of their time, like feminism, with women being superior to men in poster depictions” (Savage Thrills) using women in a high patriarchal role as a material to draw attention/money to the movie and to be sexualised. This is something I aim to research further. With the film below, I held the camera instead of being place down, it has a unique connection to a gazing eye watching the film, as though it is how the artist wants the viewers to see it. This is something I learnt from Are You Watching? part of Congruous.

See behind the scenes below, the box is fairly large due to the size of the projection but I can’t make any smaller/increase focus. I really enjoyed this process, I felt my work jump forward a step by creating a physical space.