Reflection 26/04/21: These 1-1’s were very useful in the fact that they were both male responses to my work. I discussed with Jane on 23/04/21 the male reception of these works is just as successful as the other responses I have had. It’s important to remember/acknowledge that men find these works just as uncomfortable as women, means it working.

I met with Jane and took Sweet Tooth B&W projected images with cellophane into uni and finally used the daisy chain effect on the projectors – linking two projections projecting the same image. From my group crit 24/03/21, it was discussed that I could look at ways of projecting the films/images further but to continue down the ‘old fashioned’ film path route which is working really well. I really enjoyed this process and mirrored projection, it transformed the way the film is seen, making it even more uncomfortable and intimate suggesting a pair of breasts see below.

Reflection 18/04/21: Gary in my 15/04/21 1-1 suggested the pair look like eyes, a watching gaze back at the viewer – this was a comment mentioned in 24/03/21 by a peer that said the one breast looked like a singular eye, made it uncomfortable. As though you’re being caught looking.

I had a 1-1 with Gary and Matt on the 15/04/21 regarding these new images. See initial notes below from both tutorials. It was really interesting to see that straight away there was this strange look they gave trying to figure out what is happening. As I had experimented with these images it was also clear to me that the breast was becoming unidentifiable and I wasn’t sure how I felt about it. This was something Gary picked up on in image below, is there a point where the projection becomes too distorted that it plays with the work too much? 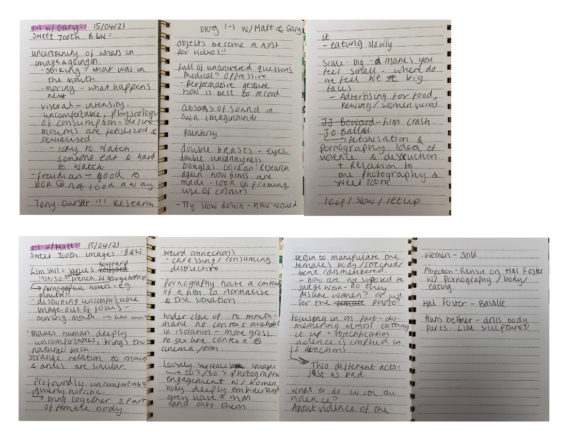 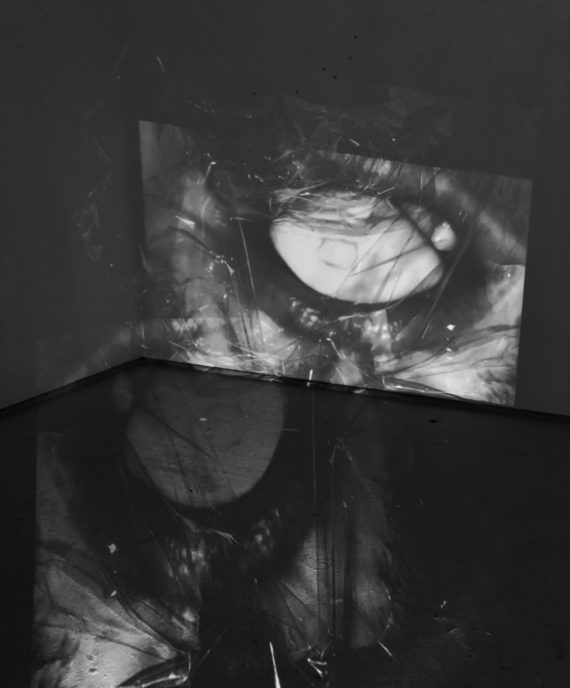 I am currently playing with some of the colours/editing on these images/films as I really liked the original grunge look of the colours but also think they work as well as b&w – intensify the act. The cellophane in the projection feels as though its in the space, if I brought it into the space as well would it be too much? – An encapsulating space. Gary mentioned that there’s something visceral about a mouth and breast being black and white, so close up. Plays with the psychology of consumption and this desired approach of the mouth from fetishisation/sexualisation even further as there’s no colour to ‘pretty’ up the act. It becomes weird to look at someone eating, let alone a breast in a mouth and double – uncanny. NOTES: I also wanted to involve within my current work a comment from group crit 19/02/21 where there was a defined difference between projection and space, see below.

I wanted to focus in on the mouth while I projected, experimenting for our exhibition proposals, to see how the space would work – floors, corners and walls. Consuming the walls of the projection really helped zone the eye to the uncomfortable, you’re forced to see it. As Matt mentioned in the 1-1, there’s two different dismembering acts of the women present, focusing of this objectification – violence is implied where there can be male dominance, as well as the intimate act of a breast and mouth. There’s two angles of uncomfortableness where my work is still unnatural to the human eye. Like films/cinemas, pornography plays with context to normalise the situation – sex, where as my films suggest the unnatural to get attention and discomfort to see all that is wrong with sexual objectification within life, pornography and the cinema. Matt suggested my work looks film stills: Jacques Bouffard and French philosopher George Bataille, Mouth novels. Bataille makes the human areas connect deeply to bring back the natural/uncomfortable.

Reflection 10/05/21: Hal Foster quotes about Shermans Untitled #190 that “This body is the primary site of the abject” (Foster, 1996, p 111) and I think this is present within these projections too, the body – the mouth is the main focus and the act becomes the main “terror” as Kristeva says, of the abject.

NOTE: I like this uncertainty that comes with my work, until you begin to see what is in the mouth, it becomes uncomfortable and unusual. Gary mentioned to hold this level of attention and to not confuse the viewer too much. Keep it simple and eye catching/not look away – Freudian.

Gary mentioned J G Ballard film Crash – works with fetishisation and pornography – could explore through the ideas of violence/destruction.

While stretching the projection onto the floor, see below, like I have done previously this year with To Squeeze/Only Touch With CLEAN Hands, they begin to look distorted, something I have played around a lot with this year and really enjoyed. I liked the depth to these images, there’s photography, projection of photography with cellophane and now more projection and working with natural distortion within the space. This kind of projection would play well within a gallery space, feels interactive almost, having to walk around/into it to see more or work out what is happening. The immersive-ness from the two walls is something to develop further, like Yayoi Kasuma, as it would also making an interesting space – feelings of not being able to escape.

Reflection 18/04/21: The floor projections created a grainy appearance to the mouth/face, working with the stubble – suggests Serra’s old fashioned Hand Catching Lead films, this use of repetition.

This lead me to involve objects/boxes. The use of projecting onto a box reminded me of Naomi Uman’s Removed – visually objectifying the women in the film with white, suggests the same way I have in my projection, using the box below, to highlight the breast, to make the breast more of an object in front of you. – Definitely something to work further with. I combined the distortion and the objectification in one. As discussed with Matt, it’s an even closer angle of what its happening in the film, an isolation of the violent/sexual act. – Abjection of the body/uneasy. Tony Oursler was a name mentioned again! Previously mentioned my peers. Oursler works with fabric/projection, where objects become the host of the work, like the box does with my work below.

After experimenting with rough surfaces such as the floor/wall, I enjoyed the effect within the film, it aded the grainy and unusual look/old fashioned film. I aim to experiment with cellophane within the space as well to slightly recreate Sweet Box with the projection/cellophane but in person to see how it comes across too.