After reflecting on this 1-1 with Gary yesterday 29/04/21, I have thought about how the work changes its reception slightly based on the audience. This is something Jane and my peers have mentioned previously in my exhibition proposal feedback, it depends who is receiving the art work. Gary as a man, began to see the artwork as very violent/aggressive/abusive and seemed to stick to this idea of male violence upon women. I don’t visual the art work as ‘violent’ or ‘abusive’ and violent has been a word I have questioned previously but I wouldn’t use to describe my work. There is the slight aggression with the chewing as this was my aim to make it uncomfortable and to get across my thoughts upon male control of women and their bodies e.g. objectification. This led me to think about how other men and women would view this art work as they’re both two completely different perspectives, men focus on the male mouth began destructive and women focus on the object representing a women being consumed? Is violence constructed by the male gaze? This area of ‘violence’ is an area I only want to acknowledge and not act on but it was interesting/important to hear. See film below which stirred ideas of acknowledging male and female audiences.

Reflection 20/05/21: I now see this comment from Gary differently and after my formative assessment feedback and now my group crit 19/05/21, Srin mentioned the same tone of violence within Moving in and around To Bite B&W Repeat in the studio. Srin as a man said it was challenging to watch, to see the males mouth consuming the breast. It has been discussed that there is a different perception based n who views it but Srin mentioned who’s gaze is it present in the film as the focus of it shifts throughout the film. I liked this outlook as he began to see the female POV of the dominance and consumption while the breast was sat in the mouth but then saw the male gazes’ view when he breasts was being chewed. This is what makes the work compelling to watch. However !!! Kieran said it is still disturbing but as he has seen it a few times it’s almost become normalised, this I repeated in the repetition of the film too.

Reflection 10/05/21: After my formative assessment feedback, Jane highlighted that there’s this change in position of male and female, there’s two sides to viewing To Bite B&W Repeat as I slightly discussed above. It’s possible men put themselves in the position of the male, hence why Gary saw the destruction, violence and aggression towards the breast and women who have viewed my work see the consumption and male control present. Jane mentioned it was importune to mentioned this recognition and from this I thought the representation of women through pornography may be emphasising this impact upon women.

Reflection 26/05/21: I contracted Catinca and upon feedback it was expressed there is clear female consumption – this was interesting to see the comparison of male/female. The Sweet Number by Valie Export was mentioned where Export unboxes chocolates and eaten them seductively – may be interesting to explore different testing techniques like in Eating/The Other.

Reflection 30/04/21: This film above has been very influential into the way my work could be received it begin to invite people to visual them being in the space. Becomes more about the work, but the space, the audience the looking at someone, looking at the work. Becomes a chain of voyeurism in its own way of performance.

See below my notes from this 1-1 (they’re very messy).

Me and Gary also discussed that there is a lot of control over women’s behaviour today, even though everyone believes there isn’t. This relates to my L5 film Be A Lady, using the poem Be A Lady, They Said (quoted by Camille Rainville) – exploring the ways in which everything is contradicted. People have become complacent to it, pretending female control/observation doesn’t exist. Within my works Gary mentioned it’s as though you’re forced to watch this loop to understand this is what women have to put up with, continually. I liked this idea because the control even involves this way of films reducing women down to an object and portraying them as a helpful women who needs to be saved by love. Pornography shows women being an object the male uses for pleasure, there’s this focus upon women and their bodies in pornography that is used to attract the male gaze, yet continues this never ending cycle women can’t escape due to the male gazes’ control.

Reflection 30/04/21: From this I aim to email out some of my films of my projections of Sweet Tooth B&W projected to both men and women and to see what kind of answers I receive. I’m interested to see if there is a two sided perception based off of gender.

However, from this 1-1 with Gary I liked the focus on the repetition and in reference to Andy Warhol and his print Marilyn Diptych, see below, “the work was a commentary on the relation between Monroe’s life and death” (MasterWorksFineArt, n.d.).”By creating repetitive imagery, Warhol evokes her ubiquitous celebrity status.” (MasterWorksFineArt, n.d.). “The use of two contrasting canvases for Marilyn Diptych illustrates the contrast between the public life of the star, who at the time was one of the most famous women alive, and her private self.” (Tate, 2021). One thing I have learnt is the exaggeration of the repetition usually either normalises or desensitises the work to the viewer, but, in my case with my work with Gary it made it more impactful and some what more violent. As said previously, from my peers and group crits, they have all mentioned it becomes sickly sweet, almost too much to watch which was the initial aim for this work. Gary mentioned it’s compelling, and it shares this simulairity to repetition here with Warhol in a different way, his repetition makes it less impactful where as mine becomes worse – you can’t help but watch and the more you watch the more ‘relentless’ it gets, as Matt mentioned previously.

Reflection 04/05/21: It may be worth printing out film stills and placing them in a similar format to Warhol and seeing how To Bite B&W Repeat looks up on a wall in print, repeated instead of a moving film on a wall. 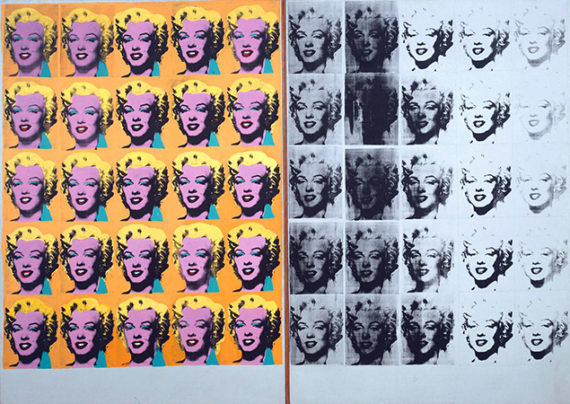 In response to the installation/filming – Gary said the angles works well and is becoming very thorough the moving around as well as the station films. It was also mentioned that the film of me watching brought a new element to the documentation/installation. Gives another scope, especially visual people in the space. Could I film more angles of me watching? Side profile view?

Reflection 26/04/21: As said in my exhibition proposal with my class, they said this use of one art work being explored in a number of ways shows good exploration. This is because I have discovered what works well throughout L6.

Reflection 04/05/21: Whereas Gary said it may be worth playing with some of my other films e.g. coloured, in similar ways?

We discussed artists such as Rosie Gibbens and Ana Mendieta, while using Elephant Magazine to find currently female artists who explore similar issues to me, with regards to how they do so.