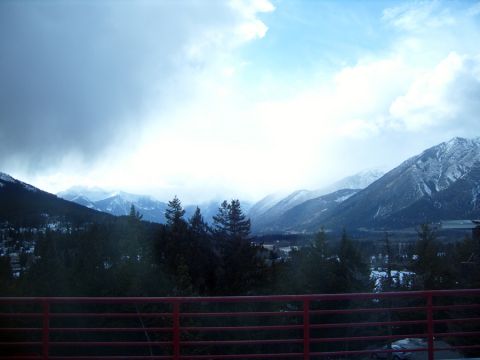 I have just arrived in Banff to take part in 5 week co-production residency programme ‘Liminal Screen’ at the New Media Institute, part of the Banff Centre. I will be developing a project that uses mobile camera technologies to record long distance runs, looking at possibilities of live broadcast/streaming from both eye-views as I run. This blog will reflect upon and document my time here.

I’ve been back just over 2 weeks and after getting over acute jet-lag followed by a nasty bronchial cough/cold, I have the job of reviewing what I did in Banff and trying to get it ‘out there’.
I haven’t got anything pre-planned, so it’ll be a case of being pro-active, seeking out /following up opportunities and contacts. I’ve got a few ideas of people/places to approach and I will be putting together a proposal/package I can send out. The difficulty will be in making something coherent from all of this, especially the video work.
I always find this difficult to do, particularly with this work, to convey the best sense of what it is. This work is not conventional linear single screen video work that can easily translate to a few minutes on a single DVD. I always feel I’m compromising the work when I try and ‘package’ it for a proposal or exhibition opportunity and I think that I don’t always make the right choices to really give justice to the work or at least a clear sense of it.
I must get better at doing this.
The other difficulty is that although my work has a clear relationship to performance (after all, this is what I came to Banff to develop), I don’t feel I really fit into the ‘scene’ as my work isn’t ‘presented’ to an audience in the way that most performance works tend to get shown. The same goes with my use of photography.
I’m going to sign up for an Artist Advisory Session at ArtsAdmin to see if I can get some sound advice.
I’m also going to see if I can in the short-term see what’s possible through UAL (University of the Arts London), from whom I received some research funding for my travel to Banff. To honour this I have to give some form of public address. It would be good to give a talk/lecture in the first instance, but I’m also going to see if I can get some of this work shown in one or more of the exhibition spaces- afterall this work is research for their benefit too.

It’s been very odd to be back, not least because I’m currently in studio limboland after having had 5 very full weeks in a studio with 24hr access. Unfortunately the studio I was due to move into in Camberwell as soon as I got back has been delayed by a month- very frustrating as it makes it difficult to unpack this work both literally and metaphorically.
I’m missing seeing the mountain views and breathing in mountain air every day- London seems very grubby by comparison and overpopulated. It’s taking a while to re-adjust, but it’s also great to be back! I’m ending this with a last view taken form my studio in Banff before I left. I’ll be adding dates of related lectures/exhibitions once they are confirmed.

"I will be out running between 3 & 4. Check computer screen to see live feed. V."

A receiving computer was set up in my studio at the end of the morning for the live stream. Previously I been using Dominik’s computer for tests, so we had to install/configure everything again to make it work.
I would be relaying the live video feed from my camera through the recording PDR unit via the USB AV component to the small transmitting computer, all of which I would be wearing! Both computers had streaming software installed to do this and Dominik worked out that to get the best quality image on the receiving computer, we would have to build in a delay in the live stream of 1 minute.
I was unsure of what the implications of this would mean for the piece (I had intended an imperceptible delay -what I see, you see, at the same time), but I didn’t have a choice. It was either this and get an acceptable/good image, or have less delay and a very poor quality image. I figured the former would be a better compromise and that something quite interesting and unpredictable might happen in the event. Suddenly I felt this was finally going to work!
Dominik went through how I would need to set up each computer immediately prior to the event. I also wanted the receiving computer to be able to save the transmitting stream as a document. I was nervous of doing this on my own as I also knew that I would be nervous enough preparing to run. I also wanted to be able to try and do this independently so that I would have the confidence to continue post Banff. As a safe measure I asked Dominik if he could be around at the start in case I had any problems. It was lucky that I did, as in the heat of the moment I had forgotten a few things.
People started turning up to the studio as I was getting ready to go. Suddenly, this was really happening. I was off and then a minute later I was off on-screen. This added a strange/funny temporal dimension and sense of continuous anticipation to the event which was compounded by the live spoken relay I was having with Dominik using ‘walkie talkies’ to determine my presence in and out of ‘zone’. Heard in the room at the time, (“ We’ve lost you, over”/ “ Am I still there, over”) it would also be repeated on screen a minute later.
Apparently there was quite a presence in and out of the studio watching the proceedings. My only regret was not to have been able to experience this for myself.
I managed almost 10k before deciding I was exhausted enough. I returned to a cheering crowd in the home straight of the studio corridor. Thanks Dominik for being there and for making it happen!

At last. It's already a week ago that we had the Open Studios and the opportunity to open the doors of our studios and other spaces to the public…

I planned to do a live streamed run scheduled to take place in the 1st hour of the Open Studios, between 3 and 4pm. Just to put myself under even more pressure, I put posters up around the building and elsewhere the day before to advertise my live event:

‘ Véronique is out running right now.'

At that stage I still didn’t know whether or not I could pull it off, but I was determined to make it happen one way or another.
It actually wasn’t as stressful as I had thought (although writing my blog entry that night I was pretty despondent).

We ended up getting the equipment we needed delivered to the studios from the AV services at 9pm that night instead of the following morning. I felt relieved as I thought it would give me a chance to get the studio ready and leave me the morning to focus on final preparations for the live run.
In the event I had the wrong standard of DVD players delivered (despite specifying the need for them to be multi-regional), and I was also given computer speakers that I couldn’t use for the 2 screen recorded projection. There was nothing I could do about it that night as the AV people leave at 10pm, so I decided to prepare everything else and to come back in the morning at 7am, when the AV store would re-open.
At 7am sharp the following morning I was sitting outside the equipment store waiting for the guy to turn up. I didn’t have to wait too long.

I set to work and had everything ready by about 10am, which meant I missed breakfast, but it was worth it. The studio looked great- a work in progress in itself with all my notes, maps, small drawings and trail information on the wall on the left side of the studio and the facing window blocked off with the adjacent right hand wall forming a corner for the two- screen recorded run projections (see 2nd and 3rd images).

I could now spend the rest of the morning and the first part of the afternoon preparing for the live event. We finally managed to track down Hung, the IT manager, but there was nothing doing. He was surprised that we could do any streaming at all from outside, as the Wi-Fi network is really set up for interior use only and doesn’t extend very far. This didn’t seem too promising but following some further tests with Dominik, we came up with something that we thought would work… (see next entry).

In the event, as soon as I got on the 'plane I realised how exhausted I was and also that I wouldn't be able to actually 'post anything from the air (duh!). I also ran out of battery power. So instead I watched 'Slumdog Millionaire' and tried to get some sleep.

It's all over. I'm sitting in the departure lounge at Calgary airport, waiting to board the plane.

I will be spending most of the flight updating you on events since my last post the night before the Open Studios, which took place on Wednesday (25th).

In short, all went very well , much better than expected and I managed to do a live streamed run using the wireless network. It was exciting, exhilarating and exhausting. The days following were spent trying to recover, climbing Sulphur Mountain, taking some photographs and doing another recorded run. Oh and we also had a wrap party on Saturday night. Sunday was spent clearing the studio (slowly). More to follow…