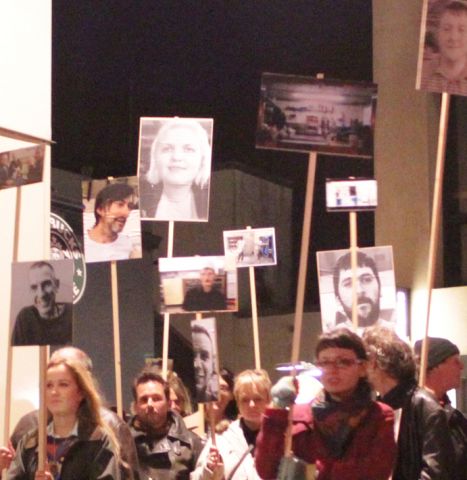 A mobile exhibition wanders around a city late at night. A news photographer captures the event.

Finally got there. The longest six months after the longest night. A visual reminder, my vote of thanks to those who work at night and whose efforts are essential to smooth running our daytime lives. Clean up, answer the phone, work in hospitals, drive, police, entertain, deliver food, undertake. Often forgotten.

Unpredictability. Despite the latest Canon technology and giving it a trial run the photographer found the light levels still too low to get a good exposure. A couple of placard bearers got whisked away onto work duty and despite weeks of testing the waterproof glue used to attach some of the photos to the placards bubbled up in the cold. The horror. It was all a tryout, one that might or might not work.

Failed to get to grips with how to use Facebook as publicity. I have been building up a group of friends and followers expressly for this purpose. I couldn’t, and still can’t work out how to add photo’s and details to the council/White Night fb page. Perhaps I will defy all and use Twitter as headline promo next time.

By working, and continuously discussing the work with the team of Fabrica volunteers it has shown me how convoluted my process has become. Too planned, not open to chance. I’ve made taking a simple photograph into a long word and process game. The refining and distillation needed to write the blog’s shows me that this isn’t necessary. I should have confidence in my intuition, and just get on with it. Cut the blather.

Just noticed that a bar that I have walked past hundreds of times has this painted photograph of men with placards. Were they paid to demonstrate, or was it a set up photo? Not the most progressive sentiment perhaps but I have to agree with them. 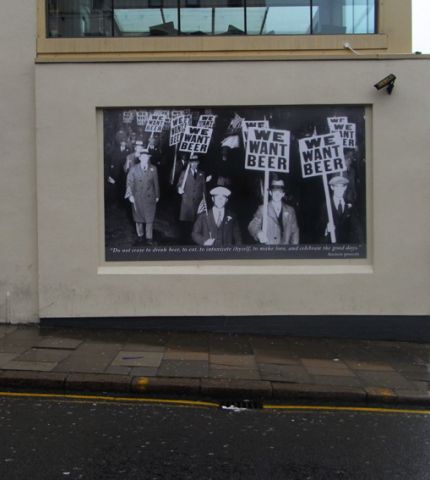 “Some of our proudest moments have been on marches: against climate change, against child detention, against the illegal war in Iraq. We’ve put down the placards and taken up the reigns of power. It’s a big change, but it’s worth it.”

Clegg’s comment shows his inbred contempt for those outside the machinery of government. An arrogance of power that oozes from Cameron and the conservative party. It is a legacy of Thatcher and Blair but kept warm in public schools, business and the City. Those without are undeserving and puerile. Losers. 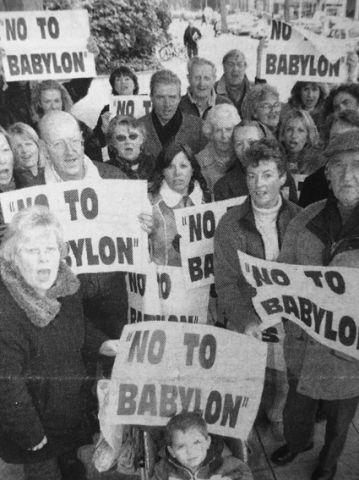 Like elsewhere, a Baltic flavour seeps into my favourite reading matter, the London Review of Books. It must be the cold. A quote from ‘I curse the river of time’, a novel by Per Petterson. The main character of is contemplating activities following the crushing of protests in Tiananmen Square. It seems opportune.

‘It felt strange to stand there shouting for democracy in the great country that had once been our Jerusalem…. thousands of us marched through the Oslo night with pictures on poles and black flags in the wind and black mourning bands around our arms and I remember thinking what do we do now?’

On the way to the shops I spotted my third demonstration of the week. The TUC public service unions pre-emptive rally of parliament against the cuts. I got off the bus. I wasn’t sure what was happening, where to stand, who I was listening to. A refreshing change. Different voices, different accents. I wandered back stage and on to the platform. The large audience cheered. A man in a suit walked past me to speak. The usual rhetoric.

Outside groups of prison workers were chatting. Coach drivers from Wales were having a ciggie. Al Jazeera were interviewing a postman. Two pink cartoon bunnies, deficit deniers said their banner, tried to grab the limelight. A man from Canning Town with a white van was busy collecting up used, surplus placards. Worked for a printer. They could supply the artwork, print the posters, put them on sticks or poles (he showed me two examples), deliver and collect. He was eager to recycle the battening. The wood was where the expense lay. He gave me his card.

Other groups formed up, delayed on the motorway. Short stumpy little placards, very practical, stapled to dowelling rods. Came from Leeds apparently. The NUT group, mostly from Midland towns, had left the meeting early so as to be sure to get into parliament. Their banners seemed labour intensive, large amounts of parcel tape, a DIY feel. As I left the teachers were trying to figure out what to do with their placards as they weren’t to be allowed to take them into The Building and there were no litter bins, Security. 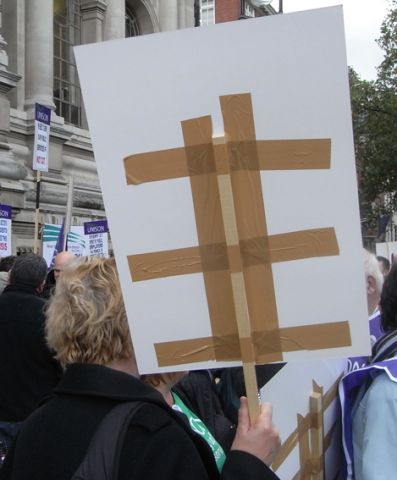