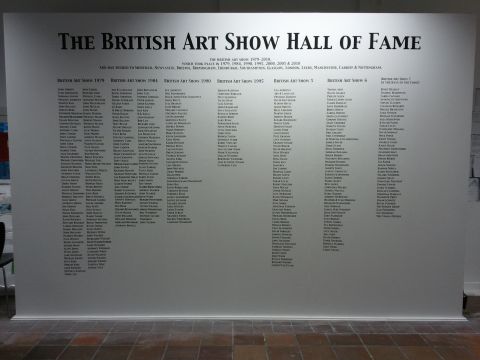 What happens when you are no longer contemporary? Simplistically either you become historical or you are forgotten. Looking through survey shows recently including the Turner Prize (many remembered, even before my birth I could recognise a few names) and the British Art Show (mind boggling amount of artists with a large proportion unknown to me) I began to wonder what befalls the artist who falls out of favour?

I was thinking of curating two sister shows about competitiveness, one directly relating to the acts of competition and one which presents artists once popular and currently not. Not revilled or forgotten just on the other side of the current moment. I’d like to pose a question about the implications of temporary success in art.

Or in other words, What becomes of the broken hearted?

This idea (which may or may not have merit) stemmed from an experiment in framing archives that I conducted in the studios. I presented a ‘British Art Show Hall of Fame’ that listed every artist, by exhibition, that has taken part in the survey show over its 35 year history. There were remarks that this was an act of institutional critique but much more interesting were the responses which took things more personally, as tutors and students considered their relationships to the list of names in front of them.

There is an aspirational quality to these survey shows, from Becks Futures for the upcoming to British Art Show for the established, that invites an artist to look at these lists and feel ambition and envy. So when looking back through the archives how does it feel not to recognise many names?

Trends in art are probably quite plodding in comparison to faster moving worlds like fashion and business (I imagine) but there are a number of artists names off the top of my head which would fit into the category of former golden boy.

Competitiveness is not a characteristic that is often openly declared as it can suggest desperation, just as you might not readily describe yourself as gregarious, as it might also make you sound desperate. I, for one, have been labelled ambitious which I can’t help but feel still has negative connotations for a young woman in a way it doesn’t have for young men.

Considering this I began to mentally list peers of mine who would never push themselves forward for fear of being thought… what? Too pushy? These people all interviewed for a course and beat six people for their place, they all achieved grades or demonstrated capability to even get interviews and in June our work will all be presented cheek by jowl in the studios where we have spent the last three years. This is the way you get into and on in art school. So why is competitiveness such a dirty word?

Taking all this into account I am sure that in some way I need to put together an exhibition which explores competition. I am curating a show in January at the Malt Cross gallery which features Peter Stonhold and Ruth O’Grady titled Imposition which allows one artist to take centre stage and the other the opportunity to intervene within the gallery space. Both these artists are on my course and I am really excited to see their work for the show. I am attempting to support two types of artists by offering the necessary frameworks for both their practices.

To follow this: a show which features artists who are competitive, engage in competitive acts and invite audiences to participate in competition, who could all compete for centre stage. And then a further exhibition which invites artists to exhibit works which were either part of their most successful period or made since that time.

I would never intend to mock the second set of arists. I am interested in what it means to be on a trajectory and what it means to no longer be on one. I’d be particularly interested to know if they felt that this change had come about because of their practice changing or staying the same? I would not consider these artists failures as they have acheived success.