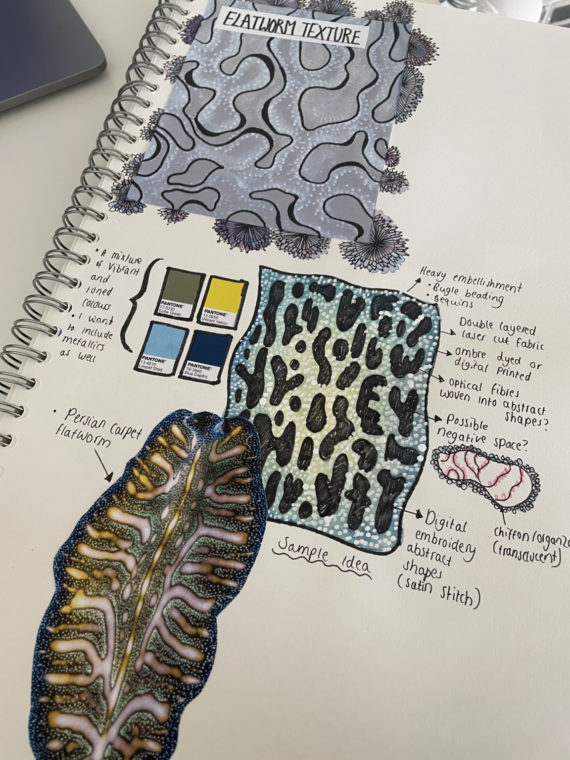 David Attenborough just released a new documentary called the mating game… amongst the rather amusing yet interesting scenes there was an episode that focused on sea creatures. whilst watching this fascinating episode, I was focused on one thing, how mesmerising the textures were in marine life and how inspiring it was as a textile designer. The Persian Carpet Flatworm particularly gained my attention and I sketched up a potential sample idea with heavy embellishment and laser-cutting media. What I admire about the fashion industry is how clothing can be inspired by the most random and intricate textures of an animal or plant for example. I have definitely decided I want my product application to be fashion, particularly haute couture as I feel this is a more sustainable option but I need to investigate sustainable materials and equipment. Sustainability is so important and is growing so much, for my RIPU project I will be rationing modern technology as a sustainable way forward. I am particularly interested in bioluminescence and to attain that in my fashion pieces I will need to use fibre optics… doesn’t sound so sustainable but there are ways it can be more sustainable. 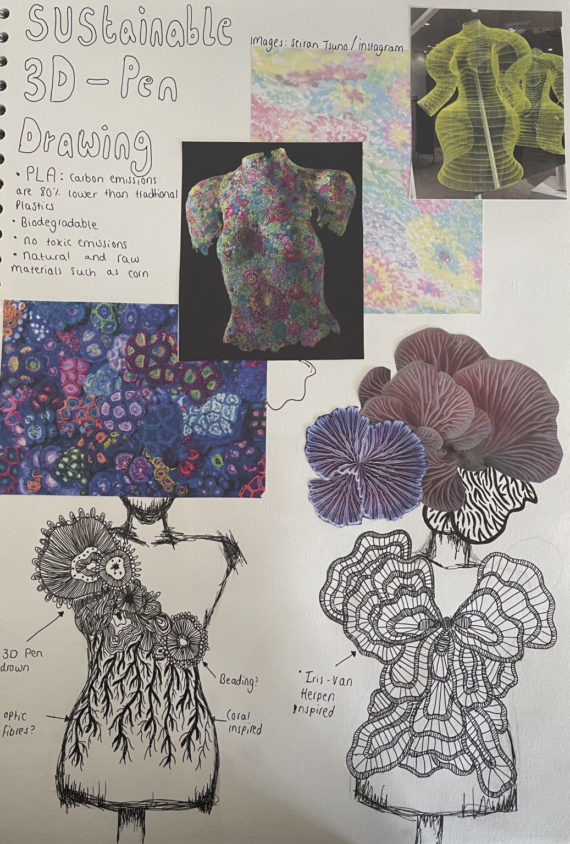 My friend posted about this artist today on her insta story, I thought it would be an interesting medium to use for my collection, however, it didn’t look very sustainable and kind of defeated the main aim of my project. I did some research and managed to find a company that had the idea of using used plastic bottles or any unwanted plastic and melting it to use for the 3-D Pen. In my opinion, this sounds like an amazing idea, you would be wearing an item of clothing that was made out of 100% recycled plastic but unfortunately, the company didn’t get enough sponsors and my search continued. I found a material called PLA where carbon emissions are 80% lower than traditional plastics and biodegradable which could be an option if I did decided to pursue the idea of making a garment out of 3D pen drawing.. this is an idea that I will come back to later on when I start sampling :) 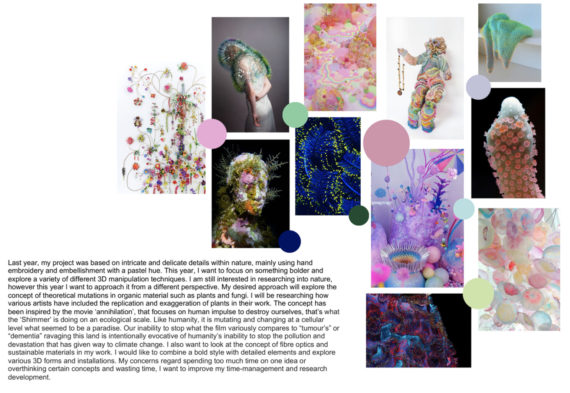 whenever I start a new project I always have to start with an initial mood board that captures the type of work I want to look at for my master’s degree. Through my research, I was constantly reminding myself why I wanted to start a masters degree in the first place and what I want to explore and develop. Trying a concept that was completely different to my BA was the main inspiration, I really wanted to look at something more modern and sustainable and this somehow took me to the path of mutations and biol-luminescence idea. The initial concept was inspired by a film I watched over the summer-annihilation starring Natalie Portman. In this movie, I had gained a lot of inspiration from the mutations, textures colours and theory behind the meaning of this film. The movie is about “self-destruction,” and on a metaphysical level, Annihilation certainly has that. A lot of the animals and plants have been mutated to alien-like organic forms and this is something I want to explore further. The concept of self-destruction intrigues me as well because the film is variously compared to tumours ravaging our planet and this can also be compared to human’s inability to stop the pollution that has given way to climate change. With this thought, I will also be exploring sustainability as a key part of my collection.