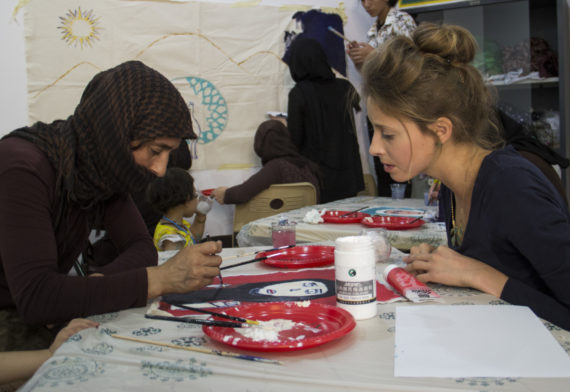 Three years ago ISIS took control of Sinjar in Northern Iraq and abducted and enslaved over 6,000 Yezidi women and children. Iraqi officials estimate that 3,410 Yezidis still remain in captivity or are unaccounted for.

The last couple of weeks I’ve been in Northern Iraq teaching eight Yezidi women, who escaped ISIS captivity, how to paint. It is the first time in their lives they have drawn or painted before. 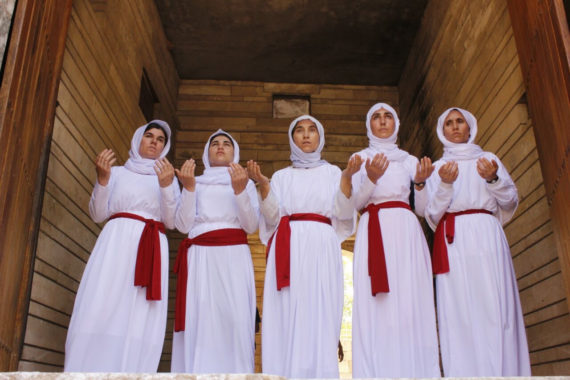 The Yezdi people are a small ethnic and religious minority and historically misunderstood group. There are only 700,000 Yezidis in the world, and the vast majority of these live in Iraq. The Yezidi religion is 6,000 years old and they have faced may years of oppression and persecution.

The ancient religion is rumoured to have been founded by an 11th century Ummayyad sheikh, and is derived from Zoroastrianism (an ancient Persian faith founded by a philosopher), Hinduism, Christianity and Islam. The religion has adopted different elements from each; baptism (Christianity), circumcision (Islam), a belief in reincarnation (Hinduism) to reverence of fire as a manifestation from God (derived from Zoroastrianism).

At the core of the Yazidis’ marginalization is their worship of a fallen angel, Melek Tawwus, or Peacock Angel, one of the seven angels that are integral to their beliefs. However, unlike the fall from grace of Satan, in both Islamic and Christian traditions, Melek Tawwus was forgiven and returned to heaven by God. The worship of Melek Tawwus by the Yazidis has given them an undeserved reputation for being devil-worshippers – a notoriety that, in the climate of extremism gripping Iraq, has turned life-threatening.

Today the terrorist group that calls itself “The Islamic State” is terrorising these ancient people, along with driving them off of lands they have occupied for thousands of years. They have also taken to selling Yezidi women and children into sexual slavery; Iraqi officials estimate that 3,793 Yezidi’s still remain in captivity.

It is very important for the world to know about the Yezidi people, what they are going through, and the beauty that their religion truly represents.

Watch a short video about the art project in Northern Iraq with Yezidi women.

Upon my return from Northern Iraq, I have begun painting my own portraits of the women, from photographs, and hope to exhibit these alongside the artwork by the Yazidi women.

A graduate in Arabic and History, I was 18 when she began selling my paintings to fund her humanitarian work, which I have undertaken in Mozambique, Sudan and Jordan. More recently I painted refugees in the notorious “Jungle Camp” at Calais; these paintings were shown last year at The Crypt Gallery in London in an exhibition marking UK Refugee Week.

My previous paintings were in oil paint however, for the portraits of the Yezidi women I hope to paint a series of egg tempera paintings with gilding on gesso.

This beautiful, luminous egg tempera technique was used by Botticelli, Fra Angelico and Fra Lippo Lippi in the early Renaissance.

It is a technique rarely used or taught today and it is wonderful to learn how to paint in this subtle method which requires a great deal of patience.

The photos in the gallery show the process of egg tempera technique which requires building up a tonal underpainting before adding transparent coloured glazes. This is the first of my portraits of the Yezidi women in progress and there is a long way to go still! Many egg tempera paintings require at least one-hundred layers.

I intend to apply gold leaf for the background of each painting is to show the sacred value of these Yezidi women, regardless of all they have suffered at the hands of ISIS.

3 August marked the poignant anniversary of the fall of Sinjar, an event so traumatic for the Yazidis that several women had marked it in tattoos on their skin. It was the date that they were taken into captivity and the last time they saw their many of their loved ones.

Following the fall of Sinjar ISIS massacred thousands and took large numbers captive, many of them women and children. One of the Yezidi women who took part in the art project had been captured and sold to 15 different men.

On the day of the anniversary we went with the Yezidi women who had taken part in the art project to Lalish, their holy temple in Northern Iraq.

The Yezidi women asked if they could paint a banner to carry together in Lalish, on this day of unspeakable grief for the Yezidi people.

The banner depicts Mount Sinjar and many Yezidi people fleeing up the mountain when ISIS invaded. On the right-hand side you can see the cars being stopped by ISIS and dead bodies beside the road. Emblazoned on the banner are the gold star and the Peacock – symbols of the Yezidi religion. There is also a painting of Lalish, their temple, on the left-hand side.

The Yezidi women painted this banner as they wanted to express something of the suffering of the Yezidi people and also the true beauty that their religion represents.

All of the Yezidi women in the art class in the Jinda (Kurdish for “New Life”) Center, a rehabilitation facility in Iraq, have suffered at the hands of ISIS, which in 2014 overran the Iraqi province of Sinjar and the  village Telezair where the women lived.

I have previously organised art projects for Syrian refugees in refugee camps in Jordan through UNHCR and Relief International. However, working alongside Yezidi women who have escaped ‘Islamic State’s’ sex trafficking rings and hearing their stories has been one of the most heartrending experiences I have faced.

In Western media we hear barbaric accounts of rape, torture and enslavement of Yezidi women, who are constantly spoken for and presented through a lens of violence and victimhood. This was not the story the women wanted to tell through their paintings.

These paintings convey their dignity, resilience and unspeakable grief. One woman Leila said, ‘we wake in the morning and see no husband, father, mother or children … Our families are still in the hands of ISIS.’ Their greatest trauma is the ongoing anguish of loss and separation. The torturous unknowing of whether they will ever be reunited with loved ones again.

One young mother Basse painted an image of ISIS separating her from her six-year-old daughter: ‘I can never forget when they took her hands out of my hands.’ Basse escaped but her daughter did not. She explained that the red for the background symbolizes the blood of the martyrs. Many Yezidi men – including Basse’s husband – were executed when ISIS took control of Sinjar three years ago.

The other women painted portraits of themselves in Yezidi traditional dress of white robes, expressing their pride in their cultural heritage. They wanted the world to know about the Yezidi people, what they are going through and the true beauty that their religion represents. This is especially important considering the dehumanizing treatment they have experienced in the hands of ISIS.

Teaching these women to paint their portraits has been a way for these women, who have never been to school or learned to read and write, to share their stories with the rest of the world.

I will also be painting portraits of these eight Yezidi women to be shown alongside their paintings and testimonies. The hope is to give them a voice and ensure that their stories are not lost or forgotten.

To read an article by Business Insider about the project, please click here.

My name is a Hannah Rose Thomas, an English artist and Durham graduate in Arabic and History, currently studying an MA at the Prince's School of Traditional Art in London. I have loved painting the portraits of people I've encountered while travelling; from African women in remote villages in Mozambique to Syrian refugees in Jordanian refugee camps. My most recent paintings have been of refugees met while volunteering in the Calais ‘Jungle’. I have had the privilege of organising art projects for Syrian refugees in camps in Jordan through the UN Refugee Agency and Relief International. I am currently raising funds for my next project in Kurdistan, Iraq, for the rehabilitation of Yezidi women rescued from ISIS. hannahrosethomas.com