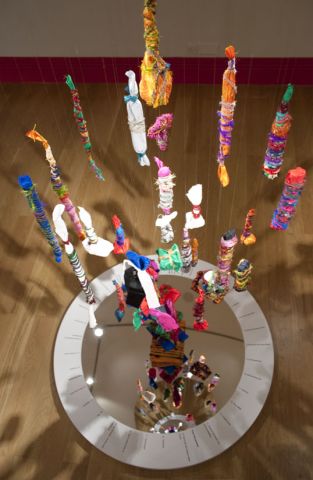 I’m blogging my work on a new installation commission for the National Portrait Gallery, London in collaboration with The Chasing Mirrors collective – young people and families from Arabic speaking communities in Barnet, Brent and Ealing. It’s funded by the John Lyon’s Charity. It opens in October, so expect this blog to be action packed as time is short!

Here’s the film of the project, commissioned by the NPG and made by Blackbarn media, now online –

I know I haven’t written much since the installation opened in October, this is because I have been so busy with the learning programme connected to the show, with talks and workshops to families, schools, staff – and next week a general Artist talk for anyone who is interested. This will take place on Thursday 9th at 7.30pm in the Studio gallery , and we’ll go up for drinks to the Late shift bar afterwards as the NPG will be open til 9pm.

.Prof Janis Jefferies, of Goldsmith’s University, who has been mentoring me for the past few years, since we met through my first textile-based project The Loom: from text to textile (2004-6) is going to be there and we are hoping to have some kind of in- conversation. I am always hungry for dialogue around the work I make, because it is relational work I guess . I have had a lot of interchange with the public through he learning programme so far, and I am hoping this will extend to the arts community too.

I have been concerned at the lack of coverage /writing about the work and have been talking with a writer about possible doing a piece on the show as I feel it exposes and draws together so many rich threads and issues that are of ‘now,’ particularly in relation to the Paiwand group. My concern has also been based on what the legacy of the work might be, beyond a set of photos -since it is a work that, literally, has a lot to say. I have suggested a few times to commissioners of this kind of temporal, relational site-specific installation project that video documentation would be a good idea. For the first time in three years, this has been listened to and acted apon, and the NPG are going ahead with planning to make a short film on the project. I am really pleased about this and also about how enthusiastic they are about it. I do realise that, as mentioned before, resources are a primary element in enabling works like this to be documented. But it’s also the culture of this organisation that seems willing to listen and get the value of what could come from it. There is also some trepidation as it is going to involve bringing together all three groups -who have not met before- to do a workshop and be interviewed about the project. So now we have to focus on what I can bring to make this happen in a relaxed and engaged enough way so that the encounter is meaningful for the groups and filmmaker has rich material to work with.

If you’ re interested, there is an essay ‘One and Another- a handshake with the ancestors’ that Janis wrote for the catalogue of ‘The Gifts’ project, (part of the shape of things commissions) which fed directly into this commission. You can download it from my site here. ﻿

It’s a strange floating feeling after a show opens. This time I don’t feel so empty, I guess because I am booked every week at the gallery, either doing sessions with the staff or workshops with the public. So the connection with the show is a very real, ongoing one. RE the staff sessions I am doing, this is a first . I have never been asked to work directly with the staff, mainly the front of house staff, on nurturing their understanding of a project in a meaningful way (after and initial talk and Q+A, we do wrapping session using personal objects they bringin). It’s such and obvious thing to do and yet no organisation has been committed enough to invite me to extend the participatory element of the work to the very crucial part of the puzzle -those who operate in the space between the work and the public. I think it must be to do with the culture of the NPG, which seems to be open and genuinely inclusive in its intentions. So I wanted to mention this here as I believe it makes a huge difference to the public’s experience of this kind of work, to be able to talk to staff in the space who have experienced the processes of the work, even in a brief way. Though i do get that resources play a major role in the possibility of this happening.

The afterglow of the private view last week renewed itself as I looked through the excellent photos that were taken by the photographer at the NPG, Natalia Calvocoressi. I was very moved by how moved people were during the opening, by the work – like a reflecting effect brought on by the presence of mirrors! It felt vibrant and I managed to stay present and take it all in, enjoy the positive energy and emotional rollercoaster of it all. Here are some photos, I will put together a gallery for my site soon and I assume the NPG will be using the photos for PR purposes. It was thrilling to see the ‘In pictures’ feature on the BBC world news the day after and know that those images have carried far and wide…I do hope there is some kind of proper review of the show, there are a lot of interesting discussion around the work – given its context and nature of the groups- the beginnings of which I heard and engaged in at the opening. I am sure they will unravel here and elsewhere.Will write more on the opening too. ﻿

Letter to the Audience of Chasing Mirrors : Portraits of the Unseen*

I want you to find a space with this space that reflects back something you are but weren’t aware of. To catch your eye in a hidden corner and find a moment of illumination. To drop fixed perceptions of others, of those who gave to this work, and see them anew. As one human being to another. To allow colour, light and three dimensional form to permeate your being and whisper in your ear and heart. To know there is no separation between us and that we are all in this together. To learn the feeling of the journey that has been taken by these individuals to become who they are, right now, here. To know we are all on this journey and that it never ends.

*A format learned on a performance Lab ‘Lore and other convrgences with the artists Janine Antoni + Melissa Martin in 2006, in London. Supported by the Live art Development Agency and INIVA ﻿

IMAGES of the show now online on BBC World news:

More to come next week.

Installing the textile sculptures in the gallery with Benoit last week was remarkably, almost bizarrely straightforward. As with Raphaella, we have worked together on this process before ( on The Gifts ) so we were in sync and focused. As I don’t often repeat work processes, it’s strange to finally get the fruits of our suffering earlier this year, and to have found many more simpler ways of mapping and preparing the work for hanging.

And this week I haven’t even been needed at the Gallery as the mirrored lettering and vinyl panels etc are all being done by Nicky and her assistant. I saw the lighting guy and we chatted and I will go up on Thursday to see it all completing. It actually opens to the public on Friday at 10am -before the PV- and I want to go early and sit incognito and watch/listen to people’s reactions. I remember for The Gifts enjoying this much more than the experience of the Private View, the night before, which was overwhelming and I was so on the floor with exhaustion from installing non-stop that I could barely keep it together. This one is different and I want to enjoy the easier ride that this installing process has been.

I wondering how it will all land with the groups and whether they will come on Friday – I’m curious to see their reaction and in fact, my own reaction. The sessions seem so far away as the process of creating the work from them has moved quickly through many stages. But it’s only been six weeks since the last session.

I did a phone interview with a local London newspaper today and the reporter asked me what I hope the work would do, in relation to the perception of, for example, the young men from the Paiwand group . I said a lot of things and I wonder if I should say anything at all. It’s all in the work. But I somehow can’t resist responding because I find these human situations and the reflections and relationships that get created from them resonate with me and carry me to places I can’t get if I work in isolation or stay silent. So I keep talking. There is still a lot to say. It’s like the beginning of a conversation and I wonder what the next chapter will be. By the time I write the next entry the work will be public. And then it becomes something else, another piece of work co-created with the public – an unknown and uncontrollable step in its evolution. ﻿