A ram born without any horns, that one of the volunteers rather sweetly named Macbeth and who I visualised in a recent image wearing prosthetic horns; has vanished from his familiar field.
The name Macbeth seemed to suit the curious creature, who seemed dumb and gentle and had no fight in him, with no interest in the other sheep, appearing quite impotent despite packing a sizeable lunch box!
What greater symbol of potency could one create than to give a ram back his horns, his personal symbol of masculine power?
I am currently creating a prosthetic set of horns for the creature using a pair left discarded, and an old belt. The visualisation I added to the photos here looks extremely sexually aggressive, possibly even a bit bondage. Thus I am going for something quite simple in the real, with the chance that they will simply droop to one-side, or impotently drag along the ground. But Macbeth is missing! Thus I intend to search the island with my prosthetic horns slung across my chest, find the beast and crown him in ritual, re-imbuing him with all of his lost power!

There is only a week left now of this island residency, and I am feeling a sense of the draw-strings pulling closed. The interviews have all been incredibly revealing, allowing light onto a delicate set of debates into tourism, labelling, development and change to everyday life. Even the Kids during the pub-mumming play that I did with them this week had lots to say about labelling and new buildings.
But it is identity and an annoyance at being “anthropologized” by so many visiting researchers that has been the main themes raised by anyone in random conversation. And the latter certainly seems to be the reason that more than half the islanders never came forward to speak to me, or could not be coaxed into talking about the island as a whole. Perhaps it is a West Island attitude; but people have been unwilling to talk in a way that they might be seen to represent more than themselves, and sometimes even just to have an opinion “captured” irreversibly that they might be presented as thinking to others. I suppose small communities everywhere survive by being so withdrawn about how they really feel about their community, because of the risk of offending people that you are crammed so close together with. It’s a shame because I was not interviewing to make judgements, but to make artworks that were relevant to and actively engaged residents. I could only do that by asking their opinions, and it is interesting how often even that was denied. I am looking forward to creating the guide, it should be an altogether different way of looking at this place, it could be a very welcome breath of fresh air.

Two Tuesday’s ago, I stirred my senseless body into wakefulness before dawn, and stole away from the little wooden cottage, heading up the track-ways towards the heart of the island. Not far on at all I found the forestry shed, a huge green metal barn used for woodworking and storing old tools. Within, amongst the timbers, I found what I had been searching for since the rumours of it’s existence first reach me a few days before; The cloak of Eigg.
The myth of it’s being woven from mackerel nets and whisky bottles had held great promise (and knowing that all myths have a kernel of truth) the actual item was of course a lesser version, though altogether still pretty impressive. It was crocheted wool, that held empty miniatures of Famous Grouse woven into the knit. It was unfortunately also not a cloak, and was bound permanently around an old sheet of drift wood. Unperturbed I nabbed the relic in true India Jones style, humming his theme tune as I made a run for it down to the pier with my bounty and all of my other equipment I had left waiting for me half way down the path. I desperately clutched at the rattling bottles, hoping no-one would wake up and catch me, and ask me to explain!
I had been so inspired by the myth of this cloak, and by the persistence of the phrase “A red can and a dram” which is the obligatory cocktail of every island occasion, that I had created a crown of McEwans cans to finish off the outfit.
At 5.30am on Tuesday morning I set up my camera in the darkness in front of the pier tea rooms, with it’s single waiting room light casting a glow across the gravel. I set up the shot to take-in the great “An Sgurr” mountain behind and donned my canny-crown. I pressed the timer and ran, leaping up onto the table top and posing with the “cloak” attempting to hold it to my back as a cloak is worn, and trying to appear like the “King of Eigg”, wearing the ornaments of what it takes to be him. The early morning light seemed like I was the last man standing after an all night boozer, the contents of which might have composed my crown.

I photographed a dozen poses, until a huge gust of wind took the crown off my head and smashed it to pieces on the gravel. Perhaps An Sgurr was stirring and my gesture was unwelcome? Either way I lifted an empty can in honour to the sleeping pitch-stone giant, popped the cans in the recycling, and silently hiked back up to the forestry shed to return the whiskey relic before 6am. 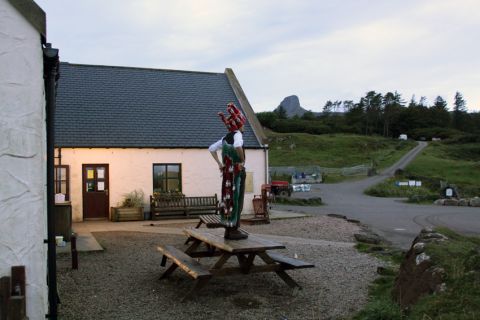 I am soon to round up the recordings for the audio guide, in favour of more physical artworks and working on the play with the school. I have heard a rumour about a mythical cloak that lives in one of the forestry sheds. It is said that it was woven from mackerel netting and embedded in it are the hundreds of whiskey miniatures. I am hoping to go in search of this mythical garment (though expecting it to be a disappointing rag if I find it!) to photograph with a piece of head-wear I am working on. Very Lara Croft.

There is a couple of interesting trends coming through in the conversations. For instance there is a sense that people come to Eigg from all over the place, but once here they take on the identity of a modern Eiggach (though it takes generations to be called “Eiggach”). One of the questions I have been asking: “Is Eigg a very Scottish place, or is it more multicultural?” has been met by every islander stating “Both”, but agreeing that the culture of the island does not change to accommodate incoming cultures, but rather shifts to assimilate them, and the result islanders all point to; is Scottish.

Since the interview with Katie MacKinnon, I have been developing a ‘guising’ costume from her description; embellished using the common island dress of century ago as depicted in the island photo-archive. Having created a costume I then strode forth (with great trepidation as the costume seemed pretty menacing) to cause imaginary havoc!
I quickly realised that although the costume itself is pretty simple and harmless, the response I had from people was generally that of panic and fear! The tourists were intrigued but only felt at ease once they knew I was re-enacting some faux-historical event, at which point they lined up to watch or kindly stayed to onside to let me photograph. This only worked so-so and thus I took to guising in secret- ‘guise-bombing’ you might call it. Where I would strike out across the island finding quieter locations or abandoned vehicles, casually set up my camera, take off my waterproof, slip the sack over my head, set the timer, and run over to pose for the shot. This seemed to work very well and I am still creating a collection of images of the guising character stealing tractors, trailers and an old plough, and running about menacingly in the woods. There are no police on Eigg, and I wonder if this sort of behaviour would be tolerated back in inner-city Glasgow?
The images I have posted alongside this article were strongly influenced by the photographer Meatyard, who of course has the last word on Halloween masks.

Despite my ability to on occasion take pretty reasonable photographs, I have been taking great pleasure in reducing the quality, saturating the colours and generally creating images that look like tired old 1970’s and 80’s postcards. This current obsession is a bit quirky but I am really enjoying the unusual quality of the images, particularly in the recently uploaded “Sheep Pole” Swap Shop icon.

In a secret act of covert art installation, I decorated an ancient standing stone out on the hillside with ribbons ; marking the seemingly ritualistic (but in fact mundane and habitual) behavioural movements of the island sheep. I did actually weave the ribbons in the time honoured fashion and tied it off in a huge bow at the base, but I think the image of the as yet untangled ribbons, the ‘potential’, is far more interesting and inviting an image than the completed act.

I have completed the sorting in the Swap Shop (phew!), and out of the couple of thousand items, nearly half had no traceable provenance, but the other half I identified as having been made in one of 45 countries world-wild, with only a handful of items coming from Scotland, and three handmade garments from Eigg.
The list of “Made In” labels, for posterity, is as follows: Australia, Holland, Denmark, France, Belgium, Romania, Bulgaria, Hungary, Italy, Spain, Germany, Indonesia, Thailand, Sri Lanka, Tunisia, Bangladesh, Cambodia, Peru, Japan, Malaysia, Portugal, Vietnam, South Africa, Nepal, Morocco, Macau, Mauritius, Czechoslovakia, Pakistan, India, Philippines, Turkey, Greece, Singapore, Lithuania, Korea, United Arab Emirates, El Salvador, Taiwan, U.S.A, China, P.R.C.(People’s Republic of China), Hong Kong, Foreign, UK, Britain, England (a huge number of books from: St Ives) Ireland, Scotland, Nowhere.

I am still interviewing islanders for the forthcoming audio walking guide, and questions have been raised about what connection the tourists (only ever referred to as ‘visitors’ on the island as a policy), or even islanders themselves- actually have with many of the landmarks. I have spoken to one or two islanders who have lived on Eigg for decades, who have never visited parts of the tiny island that visitors pass everyday!

I am currently feeling the need to re-enact the island tradition of Guising (in photography at least) with costumes described to me by the 91 year old, and the islands oldest orriginal islander, Katie MacKinnon. Though she couldn’t remember a great deal of the details, Katie said that she and her brothers would go out, on Halloween in particular; “Yes Halloween. But there’s hardly anything like that going on now. I miss it. It’s great fun. I was out guising once a time. Ha Ha. I wore any rags I could get a hold of. A false face. A ribbon round the back.” So there you go. No images of such costumes exist, so I am going to have to take a few liberties and embellish a costume of my own. 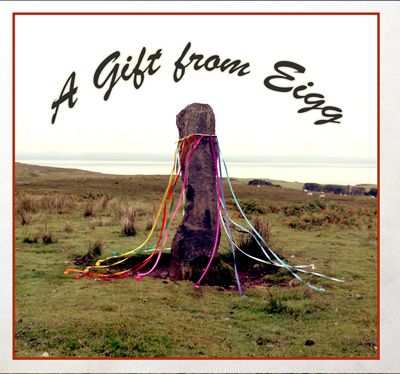