Almost a year since I first stepped off the Cal-Mac Ferry, I finally returned to Eigg. I’ve spent almost a year proposing, planning, and preparing, and it feels as if I have already done the project a hundred different ways in my imagination.

I have, of course, had to make formal statements about my intentions to no less than five different bodies and trusts, but the very essence of a residency (in my mind at least); is the intention to observe one’s surroundings and be influenced by what you see, hear, and imagine whilst assuming the grandiose title of ‘artist in residence’. In other words- you shouldn’t plan too much, you should be responsive and allow a good deal of chance to form outcomes and activities. With this in mind I am not sure how much I can say about activities in advance. As I said though, I have imagined hundreds of possible outcomes, enough that perhaps I will make Eigg the centre of my practice for several years to come.

One particular activity that I wanted to take place and has been a part of previous projects; is the interviewing of people involved.
I still intend to lead-on from recordings I make with islanders twofold: to guide and influence activities and objects I create; and to form an alternative audio walking guide for future audiences. But it has proven a challenge to get a very private people to offer opinions that they often feel they will later be judged by.
The content of the guide so far remains open, and may be quite philosophical or ambient, but the potential is still there for the islanders to contribute personal and island-wide myths and stories, create new ones, or simply have a platform for voices that don’t necessarily speak as one on issues that are important to Eiggach.

The pub-mumming-style play that I created the first time I visited Eigg will see a re-enactment in line with the posters created before I arrived. This assimilation of periphery, tangency, and imagination is set to continue with the children of Eigg Primary, when they perform their own re-enactment of the play in the last week of August.

My goodness, my Blog!

I have neglected to write for a bit, as I have been busily undertaking the beginning of the residency and with minimal internet access. Now I am back online I’ll add a few posts to update you.

The 12th June 1997 marked the end of a long and hard fought battle for the tiny island of Eigg in the Scottish inner Hebrides.

The earliest clans fought amongst themselves and Eigg’s entire population was twice wiped out entirely (save an old lady who could tell the tale). The English, of course, considered sheep more profitable than the Scotts and ruined many of the Small Isles creating bracken strangled moors, unfit for farming. With the sheep farming came evictions, the new owners using the stones of old tenant housing to build field walls. There were the odd couple of progressive owners at the beginning of the 20th century, but the last pair of these trinket collecting King-for-a-day types took it a step too far. Advertising for new islanders to create a thriving community, followed by insensible and whimsical behavior and constant threats of evictions drove someone (no-one will admit to the crime) to set fire to His-Nib’s antique Bentley Limousine, by the pier. Schellenberg (a name that a decade on still draws a grimace) was shortly afterwards driven away only to be replaced by a more illusive despot; the German artist Maruma. This con-man laid out a set of bizarre development plans, only for it to turn out that he had bought the Isle with money from questionable foreign sources and had passed it through doubtful companies and guises. The Isle and its mixed bag of inhabitants (from England, France and from other parts of Scotland- immigrants of the Schellenbergian era, and numbering only 50) bought their island, in partnership with the Highland Council and the Scottish Wildlife Trust. Whether it is true or not that Pavarotti put in a serious bid against the islanders is still a source of hilarity more than certainty.

The community that had fought and won now busied itself with becoming self sufficient with its own hydroelectric power, and other Eco accolades.

I intend to question the relationships between the preservation of historical and cultural artifacts, and the commodification of these artifacts for tourism. I want to explore how personal and island-wide myths are affected, and if any new ones are created as a result.

The recent history defined their identity then, and unsurprisingly they are still largely defined by it today.

I have finally finished the retrospective posters for the “Battle for Eigg: part 1” (see attached). This is just one of about eight different colour variants as a reduction print with Linoleum. It depicts the play in Grulin last Septmeber but has taken on the mythological status of a battle in the skies above the island. I am not as pleased with them as I had hoped I would be. The layout is nice and the images are okay, but with so little of the detail coming through I doubt they will ever see the light of day or be exhibited…I had originally wanted to create posters that referenced a combination of three styles:

-Those old paintings which contrive an event such as a battle or a massacre.

-Fly posters that are poorly printed and get pasted up all over cities.

-And lastly, a hand crafted political print, where the maker did not see the event or has contrived it for emphasis.

I suppose that it ticks all these boxes, but is still not that interesting an image in it’s own right…don’t you hate it when something like that happens? You spend months on something and it is not quite right at the end of all that investment and hard work!

Two weeks to the residency now and I’m getting a bit nervous. It’s been so long coming that I have already done it a hundred times in my head, and I’m not sure I can live up to that. The best way to do such things of course is to go and create something new again, and leave all the preconceptions at the pier. But easier said than done.

I’m making the shadow puppets myself now as I said in my last post. I have found a way of stencil spraying them onto transparent material and then cutting around the outline with a bandsaw. It looks great, just like the designs I posted last time. Hopefully they will survive and be nice enough objects to exhibit afterwards in their own right. 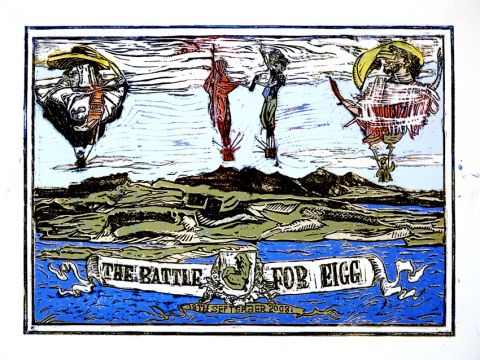 I was working towards a set of shadow puppets to be laser cut out of a very thin laminate material, and was very excited about the possible results. I imagined beautiful sharp laser-cut edges on art objects in four colours of shiny laminate, but it seems the CNC routing man had the wrong idea. I was not clear enough on the details such as shadow puppets needing to allow light through them, and some parts being delicate (hence the laser cutting option). Either way, that has come to a dead end, so reluctantly I will be making my own puppets. It’s a shame though as I liked the idea that by having them made, they would not connote a hand-crafted artefact from the island, which is now a potential hang-up. I am thinking maybe I’ll make them out of really modern materials and stick with really simple silhouettes (as opposed to hand-woven wicker-dolly clichés! If I did that, I wouldn’t blame islanders if they decided to lynch me!).

On a more jubilant note, both of the two major sponsors- Scottish Arts Council and the Highland Tourism Development Fund have confirmed their financial support! Hurrah! Hurrah! My past 12 months of hard labour will not be in vain! I can now cover my costs, buy the best production materials for the artworks, and even pay myself for the trouble. I am, in case you can’t tell, extremely pleased and relieved…3 weeks to go. Bought a mosquito net-hat and a book on foraging.

(For anyone still following this blog, you might be interested to know that what I said earlier about the percentages of scottish arts council funding was slightly mean (and they are now my best friends of course); This round they funded almost a fifth of the money requested, but with my £3,000 representing just under 6% of the total amount awarded. That could mean as little as twenty individuals in all of Scotland receiving arts funding this quarter! There really isn’t very much to go around…)

All is going smoothly but time is running out for preparatory elements for the residency. I know I will feel like a small child at Christmas time when my new digital recorder arrives, but for now I have been chasing the last couple of details from the early funders.

The tourism board are debating whether or not a different (and partly european funded) project already taking place with an interpretative element, is too close to what I will be doing with the audio guide idea. I tried to explain that this is not a cultural sciences project, but visual art which is utilising those techniques…we’ll see whether this is different enough! They should get back to me any day now. Still waiting on Hope Scott Trust as well, again, should be a reply any day. Scottish Arts Council by the end of the month. I hate the waiting and not knowing!

On more cheery notes, I have negotiated to have a whole day of activities with the primary school. But it asks difficult questions for me as I do not want to be seen as an artist that does “kiddy-workshops” or tries to cure social ills with finger painting! But I have undergone a play for the dead, thus now I want to do a play for the youth, the future decision-makers of Eigg. I want them to almost take it on as their own, and have it grow so that perhaps it becomes a new tradition. Tradition-making has long been an interest of mine. So it means working with the kids (still waiting for CRB form from the School so time is short there too!). I will perform a puppet show to illustrate what I would like them to do, make costumes and then document tableaux-style scenes. Really looking forward to this bit.

The weather up here is Scotland is so unseasonably glorious that, fingers crossed, it will remain throughout the summer and I can go out walking on Eigg every day that I am there. Must create a strong visible presence or I could risk residents not knowing I was ever there! a few flyers is NEVER enough to have any kind of real involvement or have a group take something on as there own. Yet again I am reliant on many elements of contribution from people I work with, both with people coming forward for interviews, and for them coming to see work installed afterwards.

I have created some slick logos to go with each stage of the project and will attach them to public information letters which will hit the island regularly throughout the project. They are artworks in themselves and fully describe the processes I want to undertake.

One month to go…