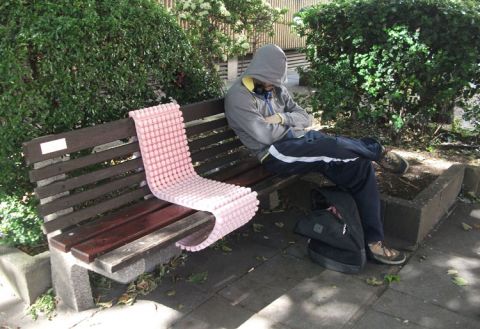 Hand in Glove are working with Bristol-based artist Anne Deeming on the Arts Council England funded Public Realm Commission; a unique co-production opportunity encouraging experimentation and fresh thinking around the display and public presentation of artwork.

The commission will enable Anne to push the boundaries of her practice and test new ideas in relation to how her work is presented in the public realm of Bristol.

We invited Swansea-based writer, artist and curator Rowan Lear to produce a piece of creative writing in response to her experience of i didn’t see you there:

Looking for Anne Deeming’s ‘i didn’t see you there’

“Carry on
Until the scene becomes improbable
until you have the impression, for the briefest of moments, that you are in a strange town or, better still, until you can no longer understand what is happening or is not happening, until the whole place becomes strange, and you no longer even know that this is what is called a town, a street, buildings, pavements…”

The gangplank of Temple Meads station deposits its passengers in a flurry of traffic. The daring among us dare to cross, darting between vehicles. The rest wait fidgeting for the all-clear. On the opposite side: one curved metal bar in an army of rigid railings, as if an impossibly strong child or canine has forced its way through. I’m looking for something out of the ordinary.

Electric-blue taxicabs converse with car horns. There’s a long pale patch where a stone wall has been repaired but not painted to match the rest. Past a building that once looked lost in time, a remnant of another city, caught in a web of circuitous traffic. Now shrouded in canvas and scaffolding, building-turned-advert, awaiting a new destiny.

A lemon yellow object frames the view. An artistic addition, but not the one I’m looking for. Fluorescent stickers posted everywhere, designed to be seen but not noticed. No railing is untethered by a bicycle. Everywhere I spot orders: Turn Right. Don’t Park. Pay Here. There’s always the possibility to turn left, park here, don’t pay.

A dishevelled house keeps a wary eye on the carpark opposite. It’s so completely out of place that I’ve never noticed it before. Something stuck, while all around moves and shudders. Does anyone live there? A plaque and a warning sign. The birthplace of a poet. This place is monitored.

Poppies populate one triangular patch of scrub; little shocks of scarlet. Paving ripples over the roots of brave city trees, upsetting the straight lines of the parking place. A discarded jacket on a metal bench: khaki in a cool, soft material. But this lost object is not for touching. Defiled by the absence of its owner, it will remain abandoned, an addition to the fabric of the street.

Some bins are gaping toothless smiles, and others have surprisingly ornate plastic patterns. A palimpsest of scraped stickers on a lamppost, most lampposts. Even concrete slabs aren’t homogeneous; each bears a unique mosaic of gum and scratches and spills. Not a structure after all: the street is a failure of uniformity.

Looking up. Looking down. Suddenly aware of the cracks in the pavement, and as always, instinctively step between them. Because a crack is not merely a gap in concrete, but in the surface of a city. Step once too often, I’ll fall through, look up at the façade and realise how thin it is.

Queen Square. Here, concrete is replaced by grass and loam and sand. In May ‘68, protesters in Paris shouted, “Sous les pavés, la plage!” – under the cobblestones, the beach. The paving owes its disorder to what lies beneath, the city owes its unexpectedness to my encounter with its cracks.

I didn’t see you there.

i saw you there!

Our first public realm commission project with Bristol-based artist Anne Deeming has been a real learning curve! We want to invite people to hear about how this co-production project was developed, more about Anne’s artistic processes and ideas behind her new work and how the reality of presenting Anne’s sculptural objects on the streets of Bristol measured up to our expectations. We would also like to take the event as an opportunity to open up wider discussion about public art and its implications.

Please join us for an interesting and celebratory evening:

Thank you again to the following people for supporting i didn’t see you there by making pledges towards our peoplefund.it fundraising campaign:

i didn’t see you there has launched!

With tremendous support from 30 people we have raised £1355 from our crowd funding campaign and made it past the final hurdle to launch the works out into Bristol city centre.

The launch event happened on Friday evening with a great turn out and the sun unexpectedly shone down on Anne’s tours of the twelve pieces.

We have added a few photos, taken by Jake Hancock to our flickr page here:

We are excited to announce that we are launching our first crowdfunding campaign in order to raise £1000 to support artist Anne Deeming’s project i didn’t see you there.

We can also reveal that for i didn’t see you there, Anne will be placing twelve sculptures, produced by casting and re-moulding, on benches and bike racks in central Bristol.

Hand in Glove have been helping Anne to develop the project by talking with her about her ideas, discussing the project with Bristol City Council and giving her some money to experiment with different casting materials. Now that the work is in production Anne is looking for additional funding to buy weatherproof materials for the final objects, which will be installed near Bristol Temple Meads. Some of the money raised will also be used to print postcards with more information about the project.

WE NEED YOUR HELP! For as little as a £5 contribution to our crowdfunding campaign on Peoplefund.it (link below) we can offer a great range of rewards including limited edition artworks made by Anne. Everyone that contributes towards i didn’t see you there will take us one step closer to reaching our target; if we don’t get a minimum of £1000 total pledges by Monday 24 June i didn’t see you there will not receive a single penny – so please support us and spread the word!

Anne Deeming talking about the project for our crowdfunding campaign – http://www.peoplefund.it/ididntseeyouthere/

Hand in Glove is a group of artists and curators based in Bristol who initiate, organise & curate nomadic projects. We aim to create opportunities for emerging artists and a platform to develop supportive networks through process, dialogue and exchange.