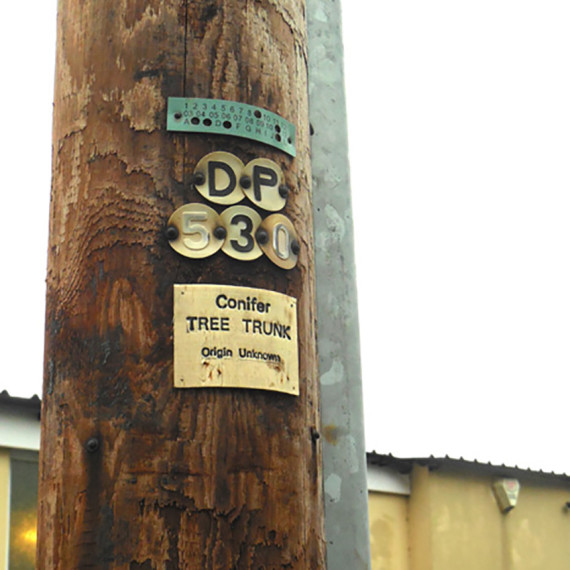 Super thanks for funding this residency.

RASTER : BETON – which means CONCRETE : GRID – is an international multidisciplinary arts festival, being held to reflect on the architecture of large housing estates and city planning of the post-war modernist movement. The residency will take place in Grünau, the largest prefabricated housing estate in Leipzig, and the aim is to develop a site-specific and participatory work, which shall be realised in the public space and through interaction with local residents.

Folke Köbberling is a Berlin based artist, and lecturer whose structural interventions present an ‘aesthetic of resistance’ to the disappearance of public space. Often in collaboration with her partner Martin Kaltwasser, they build fantastic temporary shelters, structures and sculptures from reclaimed materials.

As a materials led artist and maker working primarily with found materials, I forage, gather and re-use everything from cardboard to pallets and wooden fruit boxes. This autumn, having developed a keen interest in public space and the urban environment, I have screwed wooden seats to tree stumps and nailed botanical labels to wooden telephone pylons (see above) with the intention of awakening curiosity in the wood that surround us.

Very much looking forward to Leipzig.

Sadly, I missed the installation as I had to return back to work and vote. Here are photos which show how quickly the wax has melted transforming the piece in unexpected ways. Who knows what it will look like in a year.

I am really pleased with the residency, it has opened my mind to the quality of work which can be created in a participatory context, and helped me to understand the breadth of ways in which to involve people. Timetabled workshops are not necessary when you are working in situ. Over the two weeks we spent in Grünau making the piece, people called in, saw chatted and took part as and when they felt drawn to.

I am not sure how or when, but I would love to bring a similar project over here sometime.

Saturday, the 18th of June, we had ‘open studios’. Curious Leipziger’s came into the work-spaces to see our projects. Luckily most spoke some English as I was alone. From there to the festival centre down the road for music, food and dancing (pictured), and from there I got the train to start my journey back to the U.K.

The second of the openings here in Grünau followed a day at work space checking the panels and scrapping excess wax off where necessary. This opening was smaller than the first, there were a few locals – including a group of excited 8 year olds –  and there was more emphases on the residencies.

Five projects have been developed here in Grünau over May and June – including our wax mural, and Brut du Frigo‘s cámara oscura (see Day 10). Julischka Stengele (pictured) a Viena based performance artists is inviting Grünau’s residents on walking tours of their neibourhood, Daniel Theiler a local artist/architect has set up the “Grünau Golf Ressort” a golf club (pictured) exclusively created for local residents, and  Berlin based architecture group zukunftsgeraeusche organised a series of dances in public spaces (see Day 7).

The press came to the festival centre in Grünau this morning and interviewed a few of us. 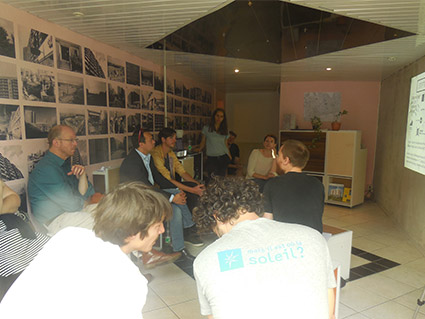 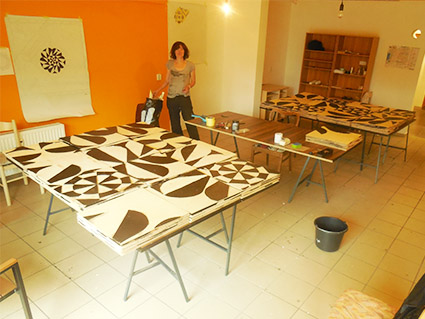 And later the first of the two openings at D21. Here works by Andrea Pichl, Laurent Kronental, Margaret Hoppe, Anne-Valérie Gasc, Ginan Seidl & Ray Peter Maletzki explore the legacy of modernity – the urban narrative of an architecture for the masses and the individual. Exhibition – like the festival as a whole – was crisp and vibrant. 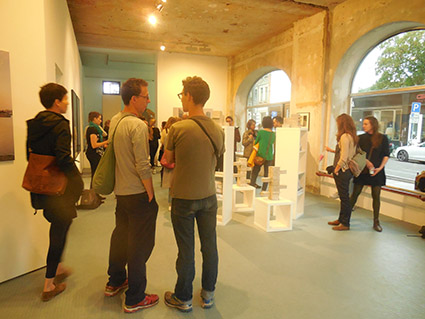 Finally, I am understanding the relationship between the wax and the ply-wood in terms of old and new. The wax is paraffin – from oil – so what we are working with is the remains of very old living beings, the wood is so super young in comparison. Bellow an images of me ‘mining’ the wax out of its industrial container, before our neighbour helped us saw the container open.

The transformation of the wax from solid-to-liquid-to-solid reminds me of the works meandering from abstraction-to-pictorial-to-abstraction, and the neighbourhood’s  journey from prosperity-to-decline-to-renewal.

As a materials-led artist and maker working primarily with found materials, I forage, gather and reuse everything from cardboard to pallets and wooden fruit boxes. I am driven by a desire to celebrate the overlooked, for instance printing the utilitarian symbols I collect from packaging, onto the other materials on which they are commonly printed. My work combines elements of design, paper engineering, fine art and construction, and is made available through limited editions, as well as informal interventions in the urban environment. See : www.laralunabartley.com