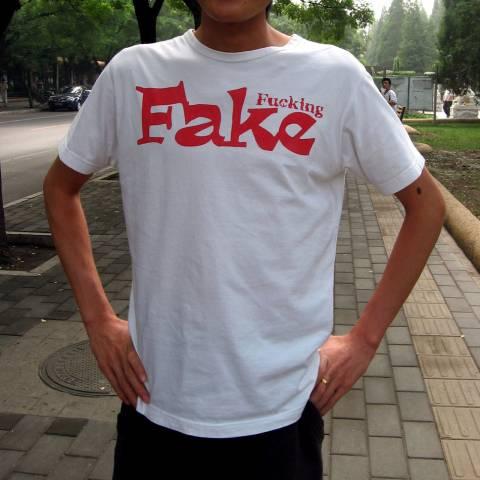 I am building an archive of pictures of people in Beijing wearing t-shirts that have texts on them. There are so many and they are so varied that I think they make a worthy starting point for inquiry into what’s going on in the everyday lives of people here during this period of rapid change and development. I am here from September 1 – October 30, 2007.

This photo of the ‘Fucking Fake’ t-shirt is in my Whatever I Like book, now available at Timezone, 798 Dashanzi, Beijing. The installation continues at Pickled Art Centre, BeiGao, Beijing until Nov. 4.

Recently I learned that fake city-citizenship identification is something migrant workers may seek in order to have the privileges of city citizenship, which include access to healthcare and education for their children. The conversation came up because we had noticed these mobile phone numbers spray-painted on walls outside the city centre, and wondered what they were for. Aside from at the 798 art enclave, these numbers are the only graffiti around that I’ve seen, and they are often painted out.

Whatever I Like, the name I gave to the project a couple of weeks ago now, opened last night at Pickled Art Centre. The title comes from the t-shirt that read: “Free to be Whatever I Like.” For the wall paintings, I generally chose instructive phrases and words from my collection of message t-shirt images, all found in the accompanying Whatever I Like publication. The words and phrases are arranged in alphabetical order and stenciled on the wall onto the three rectangular painted colour patches.

Stenciling of information is common around Beijing, for instance all the trucks have stenciled license plates and I like this connection to everyday practical signage. Visually and conceptually, these wall paintings also bear a resemblance to Chairman Mao’s workplace propaganda paintings, such as those preserved on the walls at 798 Dashanzi, the increasingly well-known art haven in Beijing. In part, this work is about a new kind of propaganda.

Garry and I went to the Beijing Art Fair today. The event feels spacious and open in design, with the bulk of it in one big airport-hanger like space. There are maybe 100 booths representing galleries from this city, other major Chinese, Korean, and Japanese cities and a smattering of European and American galleries. We’ll go back tomorrow, but here are a couple of works from today. Also, some t-shirts from today.

I’m thinking that there’s a relatively new internationalism among young people. I spoke to a woman in French today in the process of negotiating the photos of her t-shirt (see Left / Right). She’s a tour guide for French tourists. She, like most others wearing t-shirts with words on them had developed a particular and astutely fashionable individual style.

Last night on a spot on CCTV’s chanel 9 “Cultural Express,” 20 year-old Beijing-born virtuoso pianist, Yuja Wang described the Chinese edge in her playing as the way she can feel the poetry of the music. But clearly she also plays with exceptional skill, loves her instrument and is modest, yet fully confident (see You Tube for clips). This young woman struck me as emblematic of a sector of high-achieving midde-class contemporary Chinese young people.

There’s often a word that’s emphasized, like ‘Milky’, ‘Always’ or ‘Whatever’ as you can see from this selection.

I was talking to Daniel who is Chinese and had a rural upbringing, but has lived in Beijing for 14 years. He spoke English easily and I asked him why he thought t-shirts with writing on them were so popular at the moment. He said that they’ve been popular for at least 5 years. The English language, he said, is associated with consumer power and to wear it makes that association.

We went on to talk about the changes of the past couple of decades in China. As the youngest in a farming family with five children, he remembered the coupon system for distribution of rice and oil, and having barely enough to eat – sometimes having to borrow food from others in the village. In 1978, two years after Mao Zedong’s death, Deng Xiaoping, his successor declared that socialism and capitalism could co-exist and with this he allowed the rural population, making up 60% of the total population, to own their own land and grow the crops of their choice. With these changes, much of the rural population rapidly increased their output and became relatively profitable. This was the beginning of the rapid economic growth and development that it still underway.

Daniel said that not only had China been poor, but sadly, had been stripped of its cultural and intellectual power, particularly during the Cultural Revolution. He said that Vancouver and San Francisco had more significant Chinese culture and intellect than China. But, he said, this was changing, and that much of the population in this secular country, wanted more than buying power in their lives.