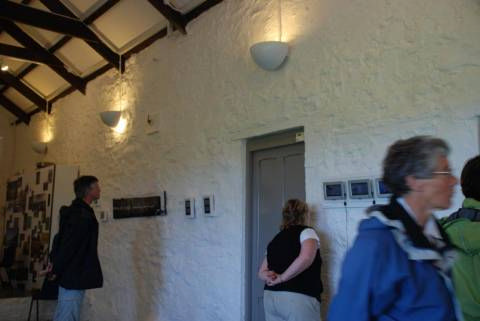 ‘research/record/remake' sets out to investigate other ways of recording and presenting visual research about cultural activity in the landscape by using site specific, remade visual presentations and photographic documents accumulated through the appropriation of conventional research methods and techniques.

So far the weather has prevented me from projecting the remade graffiti…this was intended to be the hub of the project…but heavy and unpredictable showers arrive constantly. Can't see a rain cloud approching in the dark…not to mention interference from strong winds. Luckily the chance to show some documentary works from the project at JUST RELOCATED: Heirtage Centre 2025 [this is part of morecornwall.org – artist led projects summer 2007] has prevailed. The show is up and running now and although not one of the most reknowned of exhibiton spaces given its rural-off-the-beaten-track position, the relevance of its relationship to the site has really been worth capitalising on. It also picks up the passing trade of the cliff walkers and heritage visitors…the interpretation of the count house workshop blends into our work…leading to some surpising reactions.

On Botallack cliff overlooking the famous and iconic Crowns engine houses there exists amongst the recently consolidated calciners and associated mine buildings, a collection of graffiti from the 1980's spray painted onto 2 partly rough cast concrete walls that enclose the Crown's dressing floor. This graffiti is sprayed from the same can of paint [a cream or English Rose colour?] and appears in 4 separate parts. I first saw them about 13 years ago. The subject matter to which it refers relates to the 1980's and so a probable age for the group would be around 25 years old. A number of the texts are hardly discernible now. Reading from the left to the right the first slogan in the group reads -‘SEX+DRUGS+MAGGIE THATCHER' [SDMT]. The contentious nature of the graffiti and its humour made them stand out from the conventional ‘I woz ere'. It was a very evocative if not provocative [and funny] statement that for many could sum up this period. The conceptual and visual focus of the project is centred on the remains of this graffiti.

The decision to display part of the documentation of the project came about through the opportunity to contribute to the ‘Just Relocated' exhibition at the Count House Workshop at Botallack in July. Previously I had only expected to take it as far projecting the remade work into its original position at the site over the original text. Through 'Just Relocated' it made it possible to extend this work to enable me to use a site specific display of documentation material and the structure of guided walks as a way of presenting the project informally and visually at different levels and sites such as Levant and Geevor.

Research/Record/Remake concludes with a series of site specific digital projections of remade graffiti in their original setting and a display of documentation material in the ‘Just Relocated' exhibition from the 29th June to the 8th July. 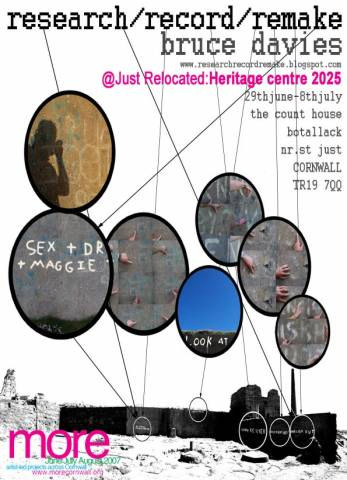 ‘research/record/remake' takes its inspiration from 3 examples of unsanctioned cultural activity [mark making/graffiti] at 3 different archaeologically and geologically renowned sites that form part of the wider Cornish mining World Heritage site. They are to be found within a 2 mile stretch on the North coast of West Penwith, Cornwall. These groups, starting with the most westerly are to be found at Botallack, Levant and Geevor tin mines.

The background for this work emerged from my experiences working as a warden from 1999 to 2002 for the National Trust on the North coast of West Penwith. The areas I covered stretched from Levant and Botallack down to Maen cliff at Sennen, lands end. Part of my responsibility during this time was the management, maintenance and interpretation of various sites of industrial archaeology. 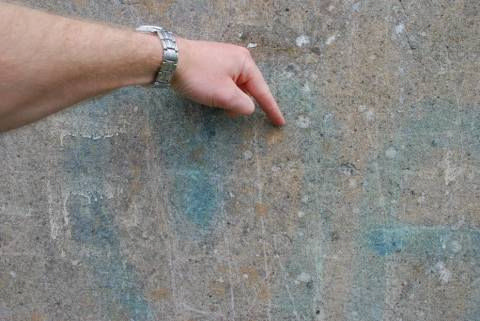