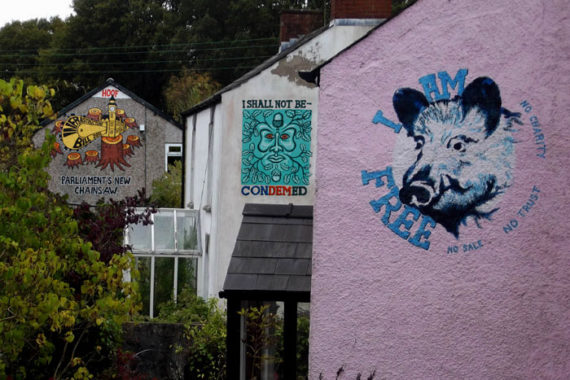 When the frackers retreated from the Forest of Dean and the local campaign was suspended, I had to halt my anti fracking murals (see previous blog). But I was reluctant to halt protest art production until fracking has been stopped everywhere in the UK.

I loaded my car with bodging equipment and toured the UK’s protection camps and gatherings, from Lancashire to the Isle of Wight, Somerset to Surrey, and showed people how to shape a spoke using green woodwork techniques from a local log. Over 100 people took part in the making of 8 spokes. With these spokes I made a wheel to represent the Commonweal. Bodging is the almost forgotten  craft of shaping a log using hand tools to make what you want, so rather handy for visiting lots of sites without power, and was the contemporary wood craft to the period of the English invocation of the Commonweal.

The Commonweal is the idea that power is best vested as close to the people as possible so they can manage their environment in order to best sustain themselves. The Commonweal should over ride the interests of crown and corporation and represent the people. It was the philosophy behind the formation of the Roman Republic, the English Civil War, and the American War of Independence. Toxic fracking is being forced on local governments by Westminster in a way which will make local peoples’ lives unsustainable. In contrast bodging deepens our relationship with our environment and the act of coppicing actually enhances tree longevity and wildlife diversity.

With a protector from each of the camps and gatherings I visited around England, we presented the ‘Don’t Frack… the Commonweal’ wheel suspended from a bodged hay rake to anti fracking pro democracy peers at Westminster. I suspended it from the bodged hay rake partly because it made it easier to present the wheel, and partly to emphasis our relationship with the land which fracking threatens to toxify, and suggest peasants revolt. Interestingly despite feeling it shouldn’t be allowed, Westminster security could not find any rules preventing the hay rake’s entry into Westminster  and so for the first time in a long time one entered.

So a forgotten vernacular craft (bodging), was used to create an icon representing an archaic idea (the Commonweal), which was presented to the ancient institution it created (Westminster), to remind it of its intended purpose.

I believe the ‘Don’t Frack… the Commonweal’ project explores the frontiers of community art, agitational craftwork, and political philosophy, so I claim it transcends propaganda and is fine art. I am currently looking for art exhibitions to display it, if you know of a suitable event to display it – the wheel and films of its making, especially if it is an area threatened by the curse of fracking, please contact me on [email protected]

Arise Commonwealists! We did it once; we can do it again. Power to the People – not Crown, nor Corporation.

PS I strongly recommend touring England’s fracking sites. Fracking sites are in some of the most beautiful parts of the country, the locals are so pleased to meet you, camping is free, and you can have as much or little excitement as you feel comfortable with – from making tea to lorry surfing. Either way you can relax feeling safe because there are always lots of police nearby.