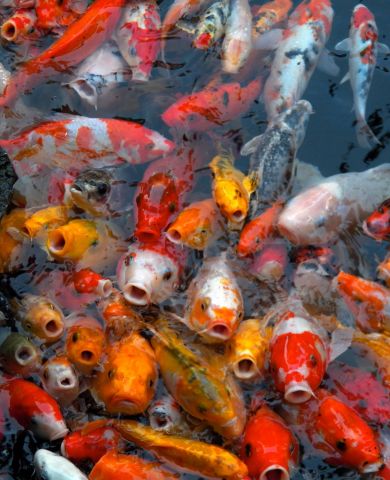 Today, as if from nowhere, a zillion people descended on the Museum. Everything seemed to get done all in one go; it was a madhouse. There is no sense of slow and steady here when it comes to work, the ethic seems to be: throw loads of people at it for as short a time as possible. An interesting model, but chaotic.

Thick smog covered the town for most of yesterday morning (not the best conditions to see public art!) but it lifted in the afternoon and the sun actually came out. Unfortunately the lifting of the fog did not stop a boat crashing into the floating lawn and wrecking it. I feel so bad for the students who made it – they worked so hard on it and were so enthusiastic.

Ling Min and I had a long discussion about my piece this afternoon. I sensed that she was not happy with what I’ve done, so I asked her about it. Bit by bit, the reasons came out. The main issue has to do with function. I am of the view that art is not about function. What I like about the boat I have been given to work with is that it has lost its function. It is a dirty, old, dead boat. People going past it would not give it a second glance, which is why I’ve given it a massive burst of colour and movement– people will be forced to look at it afresh. The rest of the boat I have left as it is. Ling Min cannot understand this. “Chinese people will say ‘Why has this boat been left dirty’?!” Her idea is to cover the boat in plastic bags – but this confuses me. Why would she cover the boat up? Why would she expect me to follow her idea? She also said that she wanted people to see that the boat could have another use, another function, to which I replied that maybe that function could be as an artwork, but she said that was not a practical function, “Birds could make a nest on it” she said, “Chinese people could see that there is another use for these boats”… Eventually we gave up and agreed that we disagreed. I’ve never been interested in function with my work: I think that’s a job for designers. It was an amicable discussion, but frustrating for both of us as we are clearly coming at the project from different sensibilities.

8th December
The students who made the floating lawn have fixed it! They worked well into the night. They moved the lawn nearer to my boat piece so there is less chance of it getting drowned by passing traffic again. The two pieces look a bit mad next to each other… but then they look a bit mad individually.

“Initiated by Royal Melbourne Institute of Technology, this cross boundary art project is… intending to inspire a dialogue within the space that embodies some of the very essence of Chineseness… Dominic Redfern, Simon Perry, Philip Samartzis, Haco, Nicola Dale, Hu Jieming, Wang Zheng, Ding Yi and his 25 students from the Public Art Department of Shanghai Institute of Visual Art… will probe into the meaning of an urban environment and culture through a variety of media, including video, sound, installation, photography and public art.”

A much better day! I cracked on with my work, despite the piercing damp cold. My hands and feet are sore, but I’m finding a way.

An odd thing happened this afternoon. I went downstairs to fetch more bamboo and I saw that Dom was talking to a couple – they turned round and I thought I recognized them from Shanghai (which was strange in itself) but in fact I recognized them from Manchester. It was Han Feng and “Vicky” who’d been in Manc as part of Han Feng’s John Moores Painting Prize winner’s residency! It was lovely to see them again. We are going out for dinner tomorrow night and they’re coming to the opening on Monday. Finding familiar faces in this tiny little water town is just incredible. Vicky said “It’s karma”. Whatever it is, I am grateful for it. 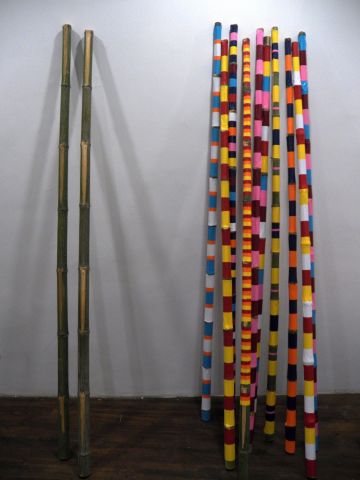 Isn’t there a Chinese curse along the lines of “May you live in interesting times”? The past 24 hours have certainly been interesting.

Last night’s stay at the Museum was difficult – an unpleasant blend of bitter cold, damp, missing light switches, outside toilets, dirty sheets and coughing. At 6 am I gave up on sleep. Not long afterwards I heard Dominic get up, so I made us both tea and his first words were “I’m not staying here. And I’m not leaving you behind by yourself.” I said I would think about it.

I spent the day cracking on with making the artwork for the boat (which reminds me, I need to get all that water out of it somehow) and that kept me busy and warm-ish at least, but none of Dominic’s equipment turned up till 5pm, so he had an incredibly frustrating day. As it got dark and it turned colder, I agreed with him that we should find somewhere else to stay, even at the risk of offending our host. We then spent a couple of hours trying to get hotel rooms. Not quite sure why it was so difficult but every aspect seemed to flummox hotel receptionists. We had a really lovely, helpful man from the Museum with us and even he couldn’t understand what was going on… but we got there in the end.

I am now in a clean dry bed and I am very tired, but tomorrow will be better for some sleep.

It was long trek to get to the Himalayas Museum in Zhujiajiao (the water town where I’m staying for the next six days). An Australian artist, Dominic Redfern, is also showing and staying here, fantastic to have someone to talk to and eat out with! Plus, now that night has fallen, it’s much less creepy knowing that I’m not by myself in this maze of stone and wood courtyards.

My bamboo order arrived safely at the Museum, thank goodness, so I can start work nice and early tomorrow morning. The boat that is here is definitely not the boat on the picture I was sent, but it is definitely the one they want me to work with, so I will see what I can do. Really lovely to catch up with some of the students from SIVA again too – they seem a bit panicked, but then I’m panicked with only four days till the opening. Argh!

It’s late and I’m tired so this will be a pathetically short post.

Today was a day of contrasts. As it was such a beautiful morning, I decided to spend it at People’s Park – an incredibly calm place despite being right in the centre of the city. I sauntered. I sat. I watched the tai chi and the chess and the card games and the reflections on the lake.

This evening Ling Min took me to an opening at the Power Station of Art. The show was enormous, as was the building. The roof terrace alone could hold multitudes. It was a design show, with a huge focus on urban living/planning/ecology, but it was the small pieces that did it for me: a mirror that only worked when two people stood before it; a wooden chest of drawers with a woodwormesque holey design and a water calligraphy machine for temporarily marking city pavements. Almost pointless, in a good way.