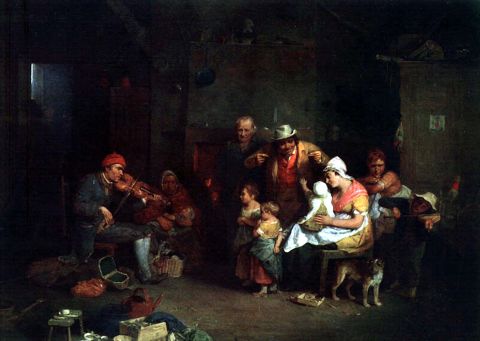 Spoli Heap Harvest sees Paul Conneally undertaking a number of cultural forages through the area of NW Leicestershire where Snibston is situated.

The forages are mediated by the works of William Wordsworth, Francis Beaumont Constable and others who all spent time in the area staying at Coleorton Hall where Wordsworth lived and worked for a whole year.

Coleorton 1806-7 – a grounding and take off point at the same time.

The Blind Fiddler – This piece will be a recreation of David Wilkie’s The Blind Fiddler of 1806 in a modern setting. The original was painted in Coleorton Hall Farm kitchen and is now part of The Tate Collection. I propose that the original be loaned to Snibston, bringing it home to North West Leicestershire, and that it be exhibited alongside the new Blind Fiddler and other works connected to it out of Spoil Heap Harvest.

Ruby Slippers – Public intervention, poetry and walks in and around Swannington. William Wordsworth selected the spot for the building of Swannington St George’s Church here. Somehow, Dorothy from the Wizzard of Oz, has become lodged in my mind alongside Wordsworth in Swannington – we can’t but walk together. Some evocation of Dorothy – her ruby slippers – will be lodged here – becoming part of this place.

Indifferent – a shamanistic divination process using images of crushed leaves, berries, animal faeces collected from the Snibston spoil heap on my intial walk through it and the poetry of Francis Beaumont.

When I’m Cleaning Windows – I go window cleaning with Mick and Richard, both ex-miners. Our work mediated by place and the poetry of Wordsworth and Beaumont. We share poems with the people whose windows we clean and make new poems too. The window cleaning itself becomes poetry.

Some have thought the musings in my last post, on William Wordsworth and Dorothy from the Wizzard of Oz, walking together, were, even for me, a little too far gone. Well here’s a poem by Wordsworth with a preceeding note that he wrote about it – and how the series its from “ECCLESIASTICAL SONNETS” was inspired by the construction of the Church in Swannington at a spot chosen by Wordsworth himself:

“the intended Church which prompted these Sonnets was erected on Coleorton Moor towards the centre of a very populous parish between three and four miles from Ashby-de-la-Zouch, on the road to Loughborough, and has proved, I believe, a great benefit to the neighbourhood.”

I SAW the figure of a lovely Maid
Seated alone beneath a darksome tree,
Whose fondly-overhanging canopy
Set off her brightness with a pleasing shade.
No Spirit was she; ‘that’ my heart betrayed,
For she was one I loved exceedingly;
But while I gazed in tender reverie
(Or was it sleep that with my Fancy played?)
The bright corporeal presence–form and face–
Remaining still distinct grew thin and rare,
Like sunny mist;–at length the golden hair,
Shape, limbs, and heavenly features, keeping pace
Each with the other in a lingering race
Of dissolution, melted into air.

“Shape, limbs, and heavenly features, keeping pace Each with the other in a lingering race Of dissolution, melted into air.”

Spending some time reading. Letters between the Wordsworth’s and the Beaumonts.

John Constable considered his time in the area as life changing. He spent many hours sketching in the gardens of Coleorton Hall and copying some of Beaumont’s collection of classical paintings by the great masters. These formed the basis of Beaumont’s gift to the National Gallery where they are still on show.

Dorothy was with them here too.

No! Not Dorothy from the Wizzard of Oz – Dorothy Wordsworth – but that’s got me thinking… you don’t need to know!

But imagine Dorothy and Toto skipping up the road to Swannington and meeting not the Scarecrow but good old William Wordsworth and on they skip. Stopping to catch their breath in Swannington itself. Dorothy clicks her heels and is gone.

Wordsworth tells Beumont to build a church on the spot where the red shoed girl vanished and he does.

In my foraging I discover that NW Leicestershire was once the centre for English cultural thought with Wordsworth, Scott, Constable and many more spending prolonged periods at Coleorton staying with George Beaumont – style arbiter and prime mover in starting the National Gallery – he being the first to donate his classical art collection and money to set it up.

As a poet, finding that Wordsworth decamped from the Lakes to live with his whole family for a year at Coleorton Hall’s farm and in fact read to Coleridge ‘The Prelude’ for the first time in full at Coleorton has sparked the juices. In studying the many poems written by Wordsworth at Coleorton and on his walks through the Leicestershire / Charnwood countryside I found references to Francis Beaumont – the playwright and friend to Johnson, Fletcher and Shakespeare. The Romantics revered and admired Beaumont’s plays, prose and poetry. Keats has a version of a Beaumont quote on his unnamed grave in Rome. Beaumont was born in Thringstone! By Grace Dieu Priory – even by Wordsworth’s time a ruin.

So my foraging will be mediated through and by the poetry and other writings of Wordsworth and Beaumont. A looking back to move forward. I will use walks and talks – forages – not seeking to simply document the area and people but to create new works. Moving back and forth in time and place, Wordsworth, Beaumont and others alongside – people from local communities connected to Snibston, both over and underground. The work will include the use of digital media, social networking, video, sound, and whatever else…..

Below is a poem written by Wordsworth at Coleorton – I find the last four lines particularly startling with their references to lost communities set against the context of my now commissioned work ‘Spoil Heap Harvest’ exploring the ex-mining communities of the area devastated in the aftermath of the great coal strike.

FOR A SEAT IN THE GROVES OF COLEORTON

BENEATH yon eastern ridge, the craggy bound,
Rugged and high, of Charnwood’s forest ground
Stand yet, but, Stranger! hidden from thy view,
The ivied Ruins of forlorn GRACE DIEU;
Erst a religious House, which day and night
With hymns resounded, and the chanted rite:
And when those rites had ceased, the Spot gave birth
To honourable Men of various worth:
There, on the margin of a streamlet wild,
Did Francis Beaumont sport, an eager child;
There, under shadow of the neighbouring rocks,
Sang youthful tales of shepherds and their flocks;
Unconscious prelude to heroic themes,
Heart-breaking tears, and melancholy dreams
Of slighted love, and scorn, and jealous rage,
With which his genius shook the buskined stage.
Communities are lost, and Empires die,
And things of holy use unhallowed lie;
They perish;–but the Intellect can raise,
From airy words alone, a Pile that ne’er decays. 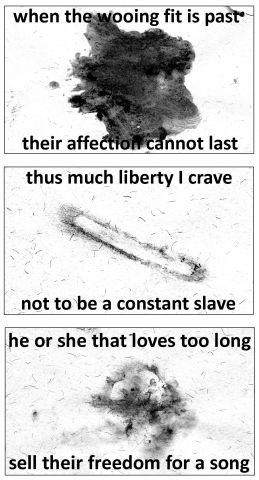