I could have stopped at Allhallows, but it didn’t seem to be quite all the way. I wanted the sense of reaching somewhere where I could go no further and that place seemed to be the Isle of Grain. It was a much shorter run, but a very welcome one to finish with, especially since today I think was the hottest day of the 14 days.

I’m writing this having completed my journey and to mark this day, but the main write up will be tomorrow, because I’m exhausted. Even though though today’s run was short, the 14 days of physical and mental energy have caught up with me. I’m amazed that my body has held itself toegther so well with not much more than a niggle in my right heel, a bit of inevitable chafing and a few scratches and bites  here and there.

I started the run where I had finished the day before, at the corner of the riverfront right outside Allhallows Haven Holiday Park. This is some place-it’s huge! Part cultish, part ‘Stepford Wives’, these almost identical static holiday homes stretch out across the estuary coastline for almost a mile and the public footpath goes right through it (the campsite I stayed in last night was somewhat more modest). I felt a bit out of place as I ran through, though being a Sunday morning it was relatively quiet. It was already quite hot, with only a very light breeze, so I was pleased that this would only be a short run of about 6 or 7 miles.

The path out of the holiday park, veered left directly onto the edge of the coastline. It was grassy and soft underfoot and I really had the sensation here more than ever, that I was heading to the end of the estuary, out to the sea or to the end of the world.  It was quiet and there didn’t seem to be anybody else about. The tide was right out and it felt open and free on this slightly undulating path, that didn’t change too much for a couple of miles. I knew that soon, I would have to head inland at Yantlet Creek to actually get to the Isle of Grain. The marker for this was The London Stone, that I spotted in the distance, as I approached. This granite obelisk-shaped stone dating back to 1856, marks the eastern boundary of the City of London’s conservancy jurisdiction on the south bank of the river. I guess you could say it is this that marks the boundary where the river meets the sea. Unfortunately I couldn’t get close to it as it was on the mud-flat on the other side of the creek, but it was good to have spotted it. There is similar stone on the opposite side of the river at Leigh on Sea, called the Crow Stone, which I have managed to see close up. I noticed there was someone on the beach opposite, but I couldn’t see how he had got there. Although the water level was low at Yantlet Creek, it wouldn’t have been possible to cross it due to the marshy instability of the riverbed mudflats.

I carried on down the path by the Creek. This historically separated the isle of Grain from the mainland, hence the name, but it silted up and it now drains the area of the Isle of Grain and Allhallows marshes. Although I was heading inland, it was pretty spectacular. Again, even though I kind of knew where I was heading, I had a bit of a sense of the unknown for a couple of miles. I would have liked to have carried on up the other side of the Creek, back up to the coastline, but, I was met with very clear private, no entry signs. Shortly afterwards, there was a large danger sign behind a high wire fence warning that the area was a former military firing range and of possible unexploded debris. I continued on the path inland, through some fields that would then lead me into the village and to the coastline at the end.

As I approached, the distinctive refinery and power-station were very visible to my right. It wasn’t too long before I reached the road into the village. After passing a small farm, I thought that I would be able to access a footpath through to a higher point on the coastline, but I couldn’t find it and I ended up keeping to the most direct path on the road. This took me into a small high-street, where I passed a cop-op, pub and a church, where there were two possible ways though to the coastline. My partner Richard, appeared behind me, to confirm the way through. It did indeed feel when I came to the end, that I had come to the edge of the sea, and as I continued left up the path I was met with a barrier, which I thought was just as good a place as any to stop. The tide was still well out and the panoramic view was amazing. What a way to end this epic journey.

It has been an amazing adventure and one I couldn’t have done without the support of my partner, Richard Allen, who saw me off each morning and came to meet me at the end of my run each day. In between, he drove the campervan to places we stayed, checked out the locations and facilities, bought provisions, took me on recuperating walks, calmed me down when emotionally exhausted and when challenged by technology and gave me foot massages when needed. This was a great experience to share and I couldn’t have done it without you, nor our trusted hired campervan Nolan. 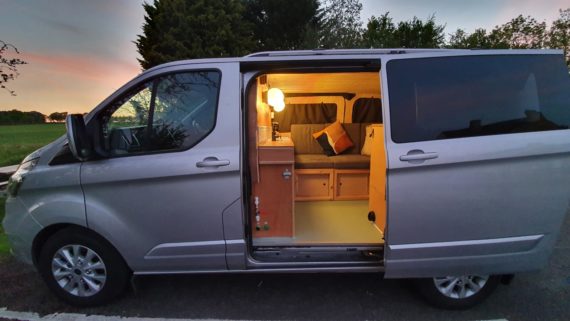 Thanks too, to the Estuary Festival Associated Programme and the team at Metal Southend for the support and also to ARU (Anglia Ruskin University), for supporting this financially as valid artistic research.