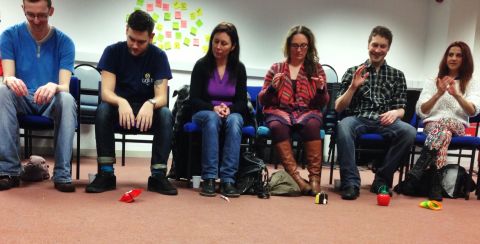 This year I’ll be researching the nature of communication with a small research grant from the Arts Council of Wales. I will be recording ‘human soundtracks’ and creating an audio-visual ‘orchestra’ for May. I’ll work with musicians and individuals with Autism Spectrum Disorder to create audio-visual ‘dialogues’ between people and objects. I’ll be researching at LUX London, meeting with mentors, reading, writing and inviting everyone to join the band!

Last week I held an event called ‘talking with objects’ which saw me trying to share some of my research with 20 friends, family and (joyfully) strangers who were interested in what I was doing! It was held in a rehearsal room at The Royal Welsh College of Music and Drama where I have been filming musicians. As well as talking about my influences I invited the participants to choose and ‘talk’ to an object. It was lovely seeing how people made their decisions, the importance of trying to get the right object. One person said she made a “panic buy” another was still choosing when others had sat down. We chatted about the idea that it might be possible to find a shared language with a thing and explored ways of creating that language. We ended with our own mini choral arrangement, all talking to our objects at the same time. Everyone joined in – people are brilliant!

A bit before that I went to London and met the brilliant Gary Stevens, one of my mentors. We chatted for hours about the research and how I could develop the work. My favourite thought of the day was Gary’s suggestion that objects are normally created to be used, to be in service, they are tools for our convenience. They are born into a life of servitude and in trying to talk to them we are trying to emancipate them!

Back again! I’m finding having this blog a really useful way to structure some of my thoughts in the madness of the Joy Orchestra project.

This week I started an intensive week of filming at the Welsh college of Music and Drama. There is some scary talent in that place: today I filmed four handed piano playing at break neck speed and met a lady who is making an instrument out of feedback.

The more I chat to people the more I keep coming back to language. I’d intended to make this project completly outside of language, just use sound and gesture in my films. But some of the stories I’m hearing are so profound – tales of the musicians ‘first’ instrument, the way an orchestra is like one animal responding almost telepathically to change – that I’m wondering where these stories can be heard?

I guess that’s one of the delights of conducting “research” as opposed to a “project” – I’m allowed to change. 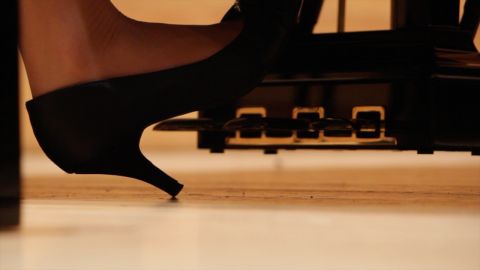 No amount of shrinkwrapped sad croissant could make up for the five gruelling hours it took to get to London on the Megabus Gold today! Still I arrived excited to visit Lux and dig in their artists moving image archives.

They’re a nice bunch that Lux lot and soon I was sitting with a cuppa in a great screening room. I’ll be visiting Lux five times over the period of my project. I’m hoping that looking at the ways other artists use video will enrich my practise. It’s proved really inspiring so far.

Laura Prouvost is someone I’ve heard lots about but Ive never seen her work in the flesh. And what a delight. I saw Stong Sory 6 in which we meet a ‘cake’ that she sings too and Monolog: an intimate dialogue that blurs audience and screen. Beatrice Gibson’s A Necessary Music also gave me lots of food for thought.

Subtitles are like another voice, they can battle with, contradict or complement spoken words…

Let people ‘arrive’ at the film…suspense, wonder and questioning are a good place to start …

I am allowed to be in my films..any version of me that is useful… 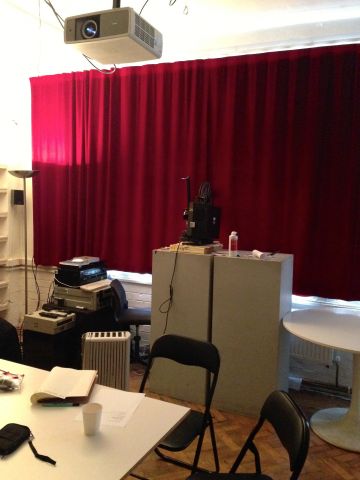 Last week started badly when I fell down the stairs at home and ended up in A and E. It was just a bruised back in the end but I got some pretty beefy painkillers. I was so disappointed as I was supposed to be filming at an Autism-specific sixth form college the next day. It felt like I was going to fall behind with my project, that I’d never get enough footage, that my show in May would be a disaster!

All I could do for days in my codeine-induced haze was post the odd call out for help on Twitter and on groups in Facebook.This is what I wrote:

“Hello all! Do you play an instrument (any standard)? Or do you have an object that is so important to you that you have given it a name or gender?

I’m researching the ways that we interact/ communicate with a variety of objects and will be filming these interactions to create an audio-visual orchestra. This will be called the Joy Orchestra. There will be an open workshop to explore these themes in March followed by a screening at the Welsh College of Music and Drama in May.

All participants will receive a piece of art work.”

I’m amazed how coherent it sounds as I was pretty sideways. I was even more amazed and so delighted by all of the responses I got! It’s so humbling that people are really excited by the idea of the project and keen to be involved and help out, especially as there’s only budget for tea and the odd pint in return!

I’ve met up with a wonderful tutor, Ceri Tippets, at the Welsh College who is keen to help with sound. I’ve met up with Chris Young of AcouChristo, a sound artist also interested in working with found (or in my case searched for) sounds. And I’ve just come back from seeing the fabulous BBC National Orchestra of Wales play some fascinating contemporary music by Poul Ruders and Pelle Gudmundsen-Holmgreen, and it looks like I might be able to connect with them in some way too!

What was especially great about seeing the BBC Orchestra of Wales this evening was it reminded me of the way an orchestra moves like one beast, elbows raise together, eyes fix on the conductor at the same time, I will need to remember that in my videos. I also think I’d like to record that space in between movements when everyone has a cough and a wriggle in their chair and the uninitiated might nearly clap.

Loads of other people have responded too: a Ukelele player happy to be filmed, a lady who has a medical device called Flash and a TV called Stevie to name a few! So my terrible week has been transformed into a really exciting start!

Please feel free to comment or get involved! Looking forward to writing more soon and getting some images on here!

An artist interested in making work with and about people and the ways they communicate.