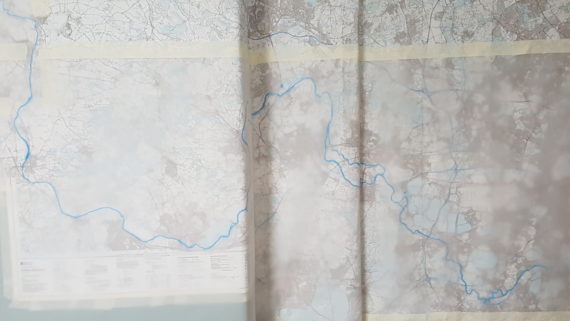 I’m back at METAL Southend to continue the Time Space residency, I started in March. This time I’m here for a block of three weeks. I’ll be focusing more specifically on the planning of The Great River Run (now renamed Thames Run: Source to Sea), plotting possible routes to take and how they can be broken down into feasible stages to completed each day. Given my track- record in previous works : The Great Orbital Ultra Run  (2012) and London to Cambridge Run Commute (2018), this has tended to average out at approximately 17 miles a day, and has been largely dependent on the locations of appropriate places to stay overnight en route.

My first full day yesterday was spent organising my work space, which is also my bedroom. I have brought with me from the studio, a huge pieced together 1:25, 000 Ordnance Survey map of the River Thames, which is close to 10 metres long and which will form the basis of a working drawing/plan of the route/s to be taken, with annotations indicating stages, places to stay and other useful information.

It took me most of the day to put up the map base alone and in order to maximise wall space, it meant completely rearranging the furniture around it, which I will have to put back in place when I leave. It was precarious and unwieldly but worth it. I now feel completely immersed in the work.

At lunchtime- I took a stroll down to the beach at low-tide. I wanted to see how far I could go before I would have to turn back. It wasn’t the best of days as the visibility was poor, due to fog, but it was good to get out. There was a kind of pathway that led out to the distant sea beyond, presumably for boats, or perhaps man-made for people to walk on as here, the pebbles and sand were more compacted. I didn’t get too far, before a stretch of water divided me from the next sand flat. I thought of wading through with the wellies that I had brought in my bag, but on my own, I thought better of it as there are patches where the sand sinks down unpredictably. I’ll come back on a clearer day, perhaps at the weekend when my partner is visiting. I like the idea that if the sea were far out enough, you could be half-way to Kent.

On my way back I saw someone in the far distance digging into the sand for cockles and another person a bit nearer, collecting what seemed to be oysters and putting them into coloured bags. It’s good to see these activities still going on, but unfortunately they are diminishing.

Back at Chalkwell Hall I continued into the evening with my map installation and overlaid the drawing that I have begun as a tracing of the river. As the light faded, I could no longer see enough to line up the drawing with the map and had to use a headlamp to finish off.  I was determined to finish putting this up today as I’m away tomorrow attending the Liquid Land Conference and Exhibition PV at Anglia Ruskin University, my workplace in Cambridge. It’ll be strange to be back as I have been on sabbatical since February and it’s the reason why I’m here. It won’t be long before I’m back there again (my sabbatical finishes in late May), so I’d better make the most of the time I have left here. 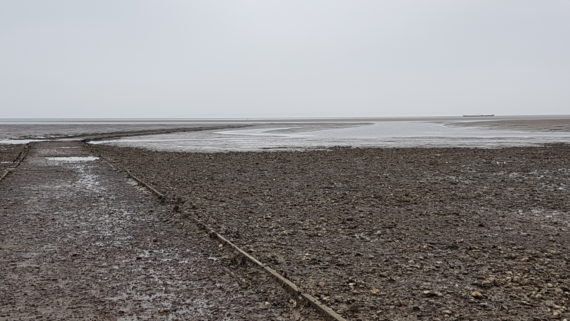