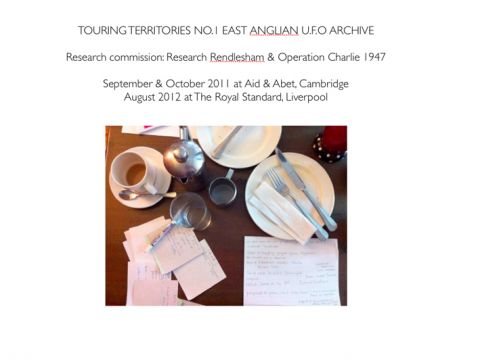 The audience came through a dark and very wet evening to get to our UFO East Anglian Archive talk last Wednesday evening. Dominique and I had an opportunity to show images from the Space Exchange process, talking about our experiences of what we did and what we found out. We thought of this a closing event to the project and so organised a video screening to accompany the talk. UFO related video works from Paul Graham http://www.paulgrahamphoto.co.uk and Erica Eyres http://www.ericaeyres.com/ in addition to our own video’s produced during the Space Exchange project rounding off the evening.

When we presented the talk in Liverpool the questions from the audience started with associated accounts of UFO sightings or friends sightings. The second set of questions then come in relating to the process we have undertaken and the research methodology. This talk followed the same pattern. In response to a question from the audience question: What is the work? For me the work is the site visits, the dialogue, the blog of the process, the sending in of information to Aid & Abet and the artist talks that result. The work is also the collaborative dialogue between Dominique and myself, how we decide what to do and how to do it. Our developing collaborative shorthand is also something I particularly welcome, how we talk to one another about ideas and our responses to those ideas.

The subject matter for this project is completely outside of our own practice interests. This project was a refreshing opportunity to be playful within a research process. Within being playful, our approach was congruent with our immerse approach to our own practices. We were, during the space exchange project completely absorbed with what we were doing, talking between ourselves, posting things to Aid and Abet, blogging and researching.

The last question of the evening concerned a possible scenario of what would happen if we were asked to go and research we something we didn’t want to. This is was interesting and Dominique and I both said we hadn’t considered this, of course we would have done if this had arisen. We have a list of three artist spaces to approach to see if we can offer this remote research service again. I think our methodology might change somewhat but above all its a process and one that is open to change. The unknown is an important factor, exploring sites in East Anglia we wouldn’t otherwise explore has been a real eye opener.

Our pre Christmas gathering might give us an opportunity to reflect and consider what we will do next both in terms of Touring Territories and Satellite as a whole.

Thanks to both Paul and Erica for providing video work for the evening.

The U.F.O Project books have been delivered, looking splendid with their low-key, understated white covers. They provide a useful contrast with the busy, colourful content inside covering the main body of this blog.

We plan to launch the book at our Touring Territories East Anglian U.F.O Archive discussion at The Queen of Hungary Project Space next Wednesday. www.queenofhungary.co.uk

Following the talk, we will send a copy to the instigator of the U.F.O archive, Dave Evans (The Royal Standard) as he now holds the original archive.

On Friday morning I am meeting Nicola at her loft-space studio in Norwich, to reconstruct our talk from the bones of the talk we gave in Liverpool earlier in the year. Shouldn’t take too long?? 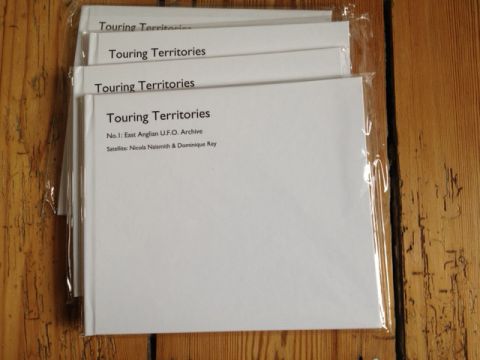 I made the final amendments to our U.F.O Archive Blog Book today – a permanent and physical distillation of this very blog. We’d had a proof printed last month and there were comparatively few changes to make (compared that is to my usual print efforts).

We’re going for a very limited run at present of 4 copies. Hopefully, it will arrive in time for the talk Nicola Naismith and myself are doing about the project at The Queen Of Hungary Project Space on the 21st November.

To get into the right frame of mind I watched the Ed Wood classic, ‘Plan 9 From Outer Space.’ Budget shooting, but sincere. There were lots of nuclear weapon /cold war references as you might expect, but quite haunting pathos from the aging Bela Lugosi (I was told his footage was actually shot for a different film). Whilst finishing off the book I rediscovered these images from a set I took at the Radar Museum – they remind me of some of the futurist technological machines in the film.

After that I think we might meet up for a review of the group and thoughts about any future plans.

Yesterday i took the train to Cambridge to take up an invitation to talk about my experiences of being a founder member of Satellite at an Aid & Abet event: Why work together?

It was a really interesting discussion with Annabel Dover member of Market Project, Lisa Wilkens, Aid & Abet Associate Artists and co-founder of Changing Spaces and Caroline Wright & members of ROAM Collective (who are currently showing work at Aid & Abet).

It quickly became apparent that each group works in quite a different way, with different agendas and perhaps importantly with different levels of support and funding. I spoke about how we started as a group and the way it works. Satellite is predominately self funding, although for the Space Exchange project we did receive a fee which covered expenses for the project we devised. Our ongoing lack of funds does get in the way of making plans and developing as a group. We have, a couple of times come close to making funding applications but have pulled back from it – i wonder why that is.

One of the topics was about being in a democratic group and i said that we operate a democratic window, a term i just made up after hearing Lisa talk about her work with Changing Spaces. Satellite members live all over the Eastern region, meeting in one space all together hasn’t happened for a number of years now. So with email as our primary communication tool when ideas are sent around we set dates for responses (the democratic window) if we didn’t set dates nothing would ever be completed. More recently for the Space Exchange project Dominique Rey and I worked together under the banner of Satellite, devising and delivering the project as a collaboration between the two of us.

On the train home I was left wondering about why i do ‘work together’ and what the purpose of Satellite is. It has a very flexible format – easy to change and adapt and perhaps i enjoy that way of working but also I’m wondering about a review. I have also been thinking about the focus a physical space can offer. Perhaps when Dominique reads this post she will reply and write some of her thoughts.

* Roam Collective: Roaming, an exhibition at Aid and Abet includes work by Will Clifford based in his home town of Rendlesham (which perhaps Dominique and I consider we now know having walked the UFO trail in Rendlesham Forest) the images in the show are very intriguing – well worth a look. He has planned a series of talk for October i think – check their website for more details, one of the talks will have a UFO focus… http://roamcollective.com/current-project-roaming/

Back down to earth with a bump

When we were in Liverpool Dave and Fran lent us a Terrance Davies film – Of time and the city (www.oftimeandthecity.com/ and http://filmstore.bfi.org.uk/acatalog/info_11951.ht… ) and it is here that i have to admit i have never heard of him before – but such is life – we cannot know everything can we? The film explores Davies’ Liverpool through a combination of archive material and new footage. The archive material has much the larger part and explores industrial, housing and commemorative subjects in addition to religion and change. It’s sensitive, sudden, humorous, critical and so extremely thought provoking. The narrative is excellent and strong, as is the choice of music – its the kind of work that will stay with me. Davies is quotes as saying ” As we grow older the world becomes stranger, the pattern more complicated …and now i am an alien in my own land” (1). The rate of change we are experiencing now is monumental, attitudes, ways of living, means of living, working and leisure. This really is a poignant film – do watch it if you have a chance to – I’m looking out for the others he has made.

The images that accompany this post i took when we visited Liverpool in March, and featured in the film albeit briefly.

1. Terrance Davies quoted in Matthew Gandy’s essay Of time and the city in the booklet accompanying the BFI DVD.