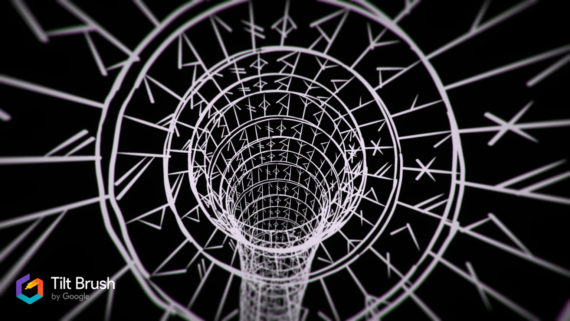 We chose Orkney because, it is a landscape of narratives, both natural and human-made. From the ever-changing shape of the islands themselves, to the tangible presence of multiple World Heritage neolithic sites such as the imposing Standing Stones of Stenness, to the intimate spaces of village life in Skara Brae and Birsay Broch, to the mystical cairn of Maes Howe, Orkney is rich with portals, through which we can enter into an alternative space and time.

We used these Neolithic sites as our source material. Unsurprisingly, we had a great success using AR in these outdoor spaces, with the portability of the technology lending itself well to our experiments. Our VR experiments were a bit more challenging. What we wanted was to be able to take it outdoors on-site, but our current VR set-up meant that there were some expected obstacles.

These were, namely, power and stability issues — it needed mains power that was not available in the very remote locations and Orkney is also quite windy. We also encountered an unexpected issue: sunlight. It turns out that the VR-Vive headset and controllers cannot be exposed to direct sunlight, which working in an outdoor location in Orkney during a particularly dry midsummer, proved to be a major challenge. We overcame these obstacles by locating our VR equipment in barns and other shelters that were as close to our source material as possible – not quite outside, but not within a designated studio space either. We certainly got some interesting looks creating with the VR-Vive in Betty, a bright orange classic VW camper provided by Orkney Campervan Hire!

The digitisation of space is happening around us – for example, cloud point data can now be collected online via photos to create 3D representations of the world. Google maps show us the world in incredible 3D photographic detail along with height and GPS data. Faced with the ancient sites of the Stones of Stenness and Ring of Brodgar, could we be looking at the first example of mapping virtual space – cycles of light and dark, birth and death? By creating an astronomical device on the ground, the early Neolithic inhabitants of Orkney were mapping time and space through the sun, moon, and stars, connecting their own narratives with the earth below and skies above. These standing stones make the transient meaningful and permanent, acting as a guide and a map to the future, and therefore, back to the past.

Adam Clarke is a professional artist who uses video games, art, and digital technology to inspire and entertain. He is a global speaker on the uses of video-gaming, digital technology, and play, to enable a new generation of creators and agents of social change. The creative producer behind numerous groundbreaking Minecraft projects, he has over 25 years experience in delivering inspiring and engaging workshops and is passionate about using digital and traditional tools to encourage global creative engagement. Adam is a Co-Director of Wandering Wizards, an Official Minecraft Marketplace Map Makers, and Co-Creator of The Wizard and The Wyld, a creative storytelling venture shared with his wife, Victoria Bennett. Online, Adam has his own YouTube Channel and is the voice of Wizard Keen in Wonderquest, a children’s educational Minecraft show, alongside YouTube star, Stampy.